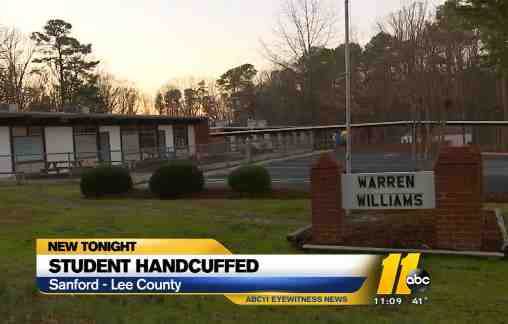 A North Carolina mother of a special needs 8-year-old is calling out William Warren school officials for handcuffing her child without notifying her, an outrageous traumatic experience that convinced the mother to relocate her son to another school.

The mother, who asked not to be identified, told WTVD her son was involved in a classroom disturbance at William Warren Child Development School in November, when a school resource officer handcuffed the 8-year-old and took him to another room to calm down.

The woman said that school officials never notified her about the incident, and when she confronted them they attempted to justify the imprisonment.

“The only thing the resource officer could say was that he was a danger to himself or others,” the mother said, “but when you are eight at a special needs school based on behavior, you should not be able to handcuff a child.”

“ … At times, SROs, who are employed by our Sheriff’s Office, have to use different methods of intervention to keep students and staff safe,” he wrote. “I have an open door policy for any parent in our district who wants to discuss a concern about their child and would welcome the opportunity to have that conversation.”

The mother told WTVD that her son is doing better now and noted that he is attending a different school.

William Warren school employees weren’t the only ones to face criticism this week over how they restrain their students.

A teacher in Bangor, Michigan resigned Tuesday for duct taping a 16-year-old student’s arms and chest during class. An absolutely horrifying notion that a teacher in the education establishment, someone whose job is supposed to be caring for kids would ever do such a thing.

“We had some students approach us and advised that another student had been duct taped during class during the day,” Bangor Police Chief Tommy Simpson told Fox 17. “By the time we started conducting interviews, (school officials) already made personnel decisions, and the teacher involved in this had resigned.”

The incident “involved the teacher applying duct tape to a 16-year-old student’s arms and chest as a classmate recorded the prank on video,” Simpson said.

“The student who was duct taped said that he was embarrassed by it,” he said. “It was an uncomfortable moment for him.”

Simpson said that investigators are now working to determine if malice was involved or criminal charges are warranted in the case.

He also encouraged students and parents to flag authorities when they believe classroom issues get out of hand.

In both cases, the involved schools overstepped the boundaries of the educational institution to student relationship. In one instance the teacher was allegedly joking around, but in the other incident, handcuffing an 8-year-old was viewed as punishment. Years ago there were two similar cases where an 8-year-old special education student and a 6-year-old special education student were handcuffed  as punishment after throwing tantrums and misbehaving in two different locations across the country. So with the problem as wide-spread as this, it becomes abundantly clear that the schools violated the law.  All of these nightmarish stories should horrify any parent. When a kid goes to school you expect your son or daughter to be protected and to receive an education, not to be brutalized.