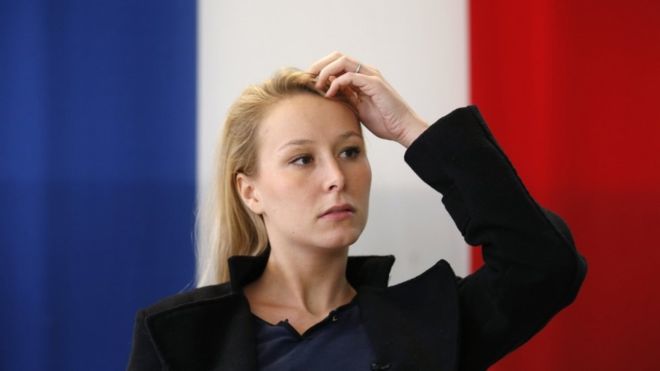 Immediately after leader Marine Le Pen left for Lebanon on her first official visit out of state, French government agents raided her office as part of an investigation into “fake jobs.” According to state officials, this raid is part of a probe to “find evidence related to the ongoing enquiry” as to whether leader Marine Le Pen misappropriated European Parliament funds in her hiring decisions,  referring to two individuals whom Ms. Le Pen allegedly improperly hired as parliamentary assistants.

The probe comes as Le Pen’s party, the National Front, made major advances in the polls over the past week. According to her office, “[i]t looks on the face of it like a media operation whose goal is to disturb the course of the presidential campaign”.

Monday’s raids on the National Front offices at Nanterre, just outside Paris, came as Le Pen seeks to raise her international profile with a two-day visit to Lebanon, where she reiterated her pro-Syria regime stance.  Le Pen’s support of the Assad regime conforms to recently elected U.S. President Donald Trump’s position on the Syrian leader, as well as 2016 U.S. Presidential Candidate Bernie Sanders.  This position is at odds with current French President Hollande and former President Sarkozy’s opposition to President Assad and support of various “Sunni militias,” which Assad recently referred to as “tantamount to supporting terrorists.”

Marine Le Pen from #Lebanon today: Syrian President Bashar al-Assad is the only possible choice in the face of the "Islamic State" threat. pic.twitter.com/U4gfMxi5dt

French investigators opened a preliminary inquiry for fraud in December following up on claims from the EU’s anti-fraud office. Monday’s raids on the FN officers were part of their search for evidence.

Brussels investigators claim Le Pen paid her bodyguard, Thierry Légier, more than €41,500 (£35,350) between October and December 2011, by falsely claiming he was an EU parliamentary assistant. She is also accused of paying nearly €298,000 between December 2010 and 2016 to her France-based assistant, Catherine Griset.

To qualify as a parliamentary assistant, an employee must to be physically working in one of the European parliament’s three offices in Brussels, Strasbourg or Luxembourg and be resident near that workplace.

The European Parliament has ordered Le Pen to repay the estimated amount of 336,146 euros ($357,000). She has refused. Le Pen has appealed the decision and maintains that the jobs were not fictitious.

The amounts levied against Ms. Le Pen are currently being garnished from her MEP’s salary. Her refusal to repay the money by the end of the January deadline means her MEP pay will be halved to around €3,000 from this month and most of her allowances and expenses frozen. In total she is expected to lose around €7,000 a month.

Le Pen has said she refuses to “submit to persecution”.

Le Pen told Reuters, “I formally contest this unilateral and illegal decision taken by political opponents … without proof and without waiting for a judgement from the court action I have started.”

An opinion poll on Monday put Le Pen seven points clear of the centrist outsider Emmanuel Macron and his conservative rival François Fillon, who are tied on 20%, in the first round. However, the National Front leader would lose to both Macron and Fillon in the May 7 run-off, the poll predicted, by margins of 16 and 12 points respectively.

Le Pen, who is running on an anti-immigration, anti-European platform, said in a documentary by BBC Two, named ‘After Brexit: The Battle For Europe’ on February 9th:

“This is the great comeback of patriotism. I believe that the left right division is an illusion. It is an artificial division created to hide the fact that there is another way. The real divide is between the patriots and the globalists. I am on the side of the patriots. Many of the European leaders are on the side of globalisation.”

Le Pen also addressed the issue of the National Front being seen as racist, saying that the opinion is held only by foreigners and that “those critics no longer exist in France.”

Get your "Russia did it" excuses ready because Marine Le Pen is about to save France. ? https://t.co/0Sa0R02TEb