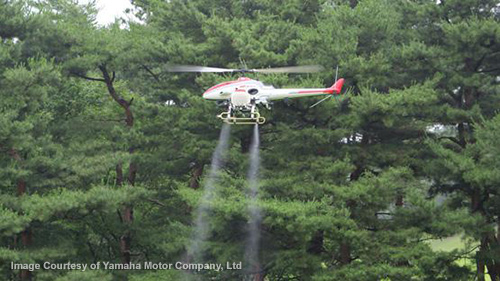 (NaturalNews) The federal government has granted its approval for a new unmanned pesticide drone that reports indicate will soon start dumping chemical herbicides and other crop-related substances from the sky.

The helicopters, designed by Yamaha Corp. U.S.A., have an empty weight of only 141 pounds, according to a Federal Aviation Administration document,[PDF] and they don’t require a human pilot. Multinational corporations like Monsanto can just load them up with Roundup and send them on their way.

“Yamaha unmanned helicopters are designed for a wide range of industrial and research applications,” reads an official brochure for the new technology,[PDF] which lists “precision agriculture,” “spraying” and “seeding” as potential uses.

“Your eye in the sky offers cost effective, accurate and efficient spraying with zero soil compaction,” it adds.

Here you can see the “RMAX” unmanned helicopter in action as it shoots chemicals down on crops:
image

Federal regulators were initially hesitant to approve the, drone but they eventually caved, granting a Section 333 exemption to the civilian drone on May 1. Steve Markofski, a spokesman for Yamaha Corp. U.S.A., told the Associated Press this in response:

“I certainly understand their cautious approach. It’s a daunting task given our airspace is complicated.”

Prior to this approval, the Federal Aviation Administration (FAA) had only issued exemptions for much smaller drones weighing less than 55 pounds. In this case, the RMAX will be allowed to operate with a maximum payload of 218 pounds.

Besides having the capacity to water, fertilize and spray pesticides on crops, the RMAX can also be equipped with special sensors capable of detecting individual crop needs, such as which crops need more irrigation.

“[T]he RMAX UAS [unmanned aerial system] has been in operation since 1997 and logged more than two million flight hours,” stated the FAA in conjunction with its approval. “There are approximately 2,600 RMAX UAS in use worldwide.”

What this means is that chemical companies like Monsanto will have an easier time than ever ensuring that their poisons reach the crop fields of America. Drowning Roundup Ready soybean and corn crops in glyphosate will soon be as simple as the flick of a light switch — and a real-live pilot won’t even need to be present.

It’s a dream come true for the biotech mafia, at least when the project eventually goes live. Farmers wishing to use this ominous drone technology will still need to obtain agricultural aircraft operator certificate approval from the FAA, which has yet to take place.

“A vehicle like this gives you a way to get in and get out and get that treatment done,” stated Ken Giles, a professor biological and agricultural engineering at the University of California, Davis, who predicts that the RMAX drone will work best for precision spraying on California vineyards.

“Precision agriculture,” a.k.a. automated chemical applications, will make up 80% of UAS market

Though Yamaha claims that UAS technology has a wide range of possible applications, a report by the Association for Unmanned Vehicle Systems International (AUVSI) found that so-called “precision agriculture” will make up about 80% of the domestic UAS market.

“Yamaha’s exemption represents the first time the [FAA] has approved a UAS for crop-spraying and it is also the largest platform granted permission to operate in the US,” added Brian Wynne, president and CEO of AUVSI.

The following image provides a visual comparison of the size of RMAX drone:
image