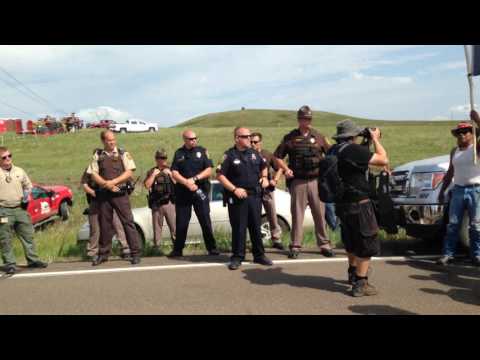 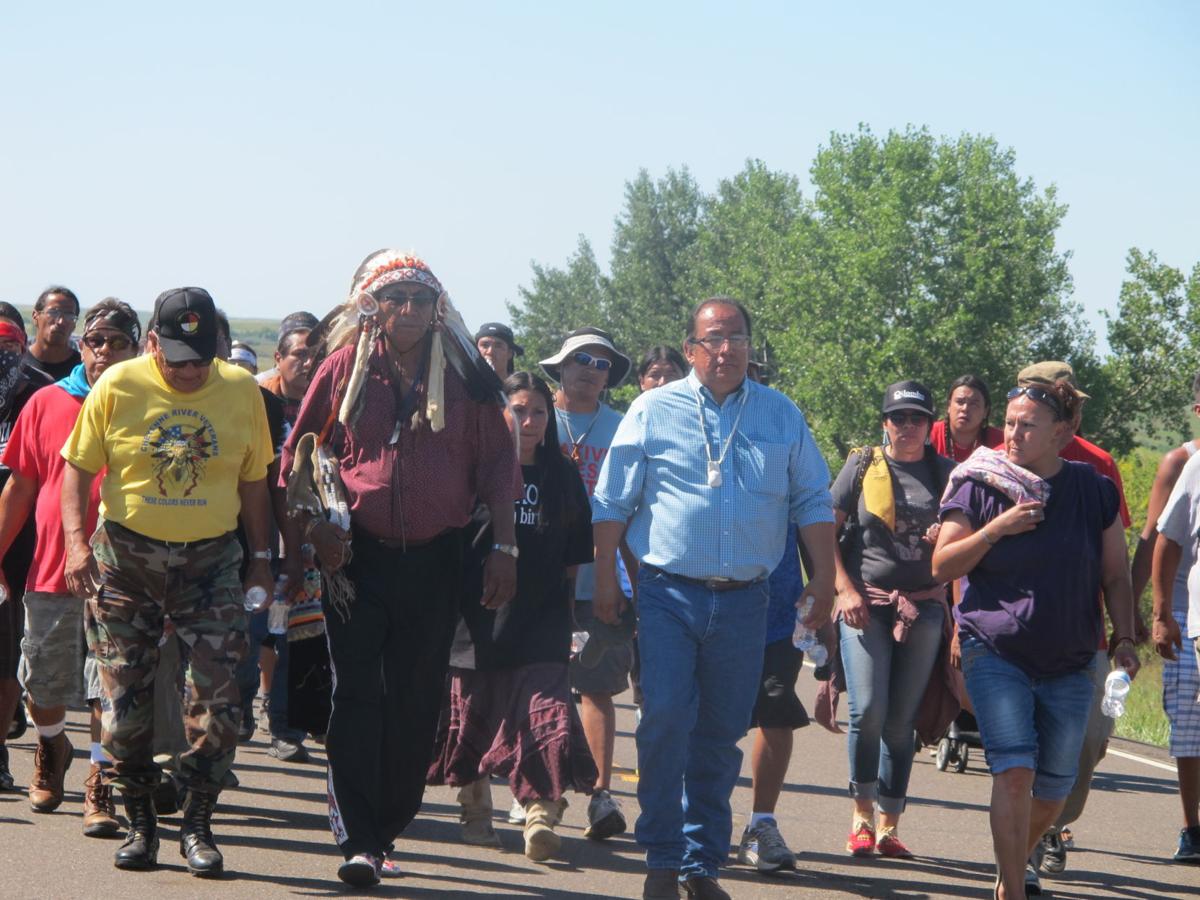 MORTON COUNTY — Work stopped Tuesday at the site where hundreds of Standing Rock Sioux tribal members and supporters are protesting construction of the Dakota Access Pipeline near the reservation boundary.

The work stoppage gave law enforcement, tribal and state officials time to plan how to manage the protest, with numbers swelling by the hour as busloads of Sioux and others arriving to join the anti-pipeline movement. Arrests are occurring almost daily.

Workers were instructed to leave their equipment late Monday after youthful protesters walked onto the work site and surrounded the machinery. Morton County Sheriff Kyle Kirchmeier said the mix of people around the machinery caused him to stop work until an improved plan for safety could be developed.

Kirchmeier said he didn’t know whether work would resume because some options were still in flux Tuesday evening. One option was for the private landowner to allow his fence to be moved back into his property to give protesters more room to assemble off the highway.

Kirchmeier met with Standing Rock Sioux officials in the morning and with state officials at the governor’s office Tuesday afternoon before returning to the department headquarters to brief patrol on how and when work will continue.

“Basically, what we talked about at the meeting was how to de-escalate tensions between the pipeline workers and the protesters, and us, I guess. One option is to give them more land and more comfort, room for tents, water, a Dumpster, that kind of thing,” the sheriff said.

Ideally, there would be ample room to move the hundreds of cars, pickups and enforcement vehicles off the roadway, too, he said.

About 28 people have been arrested since last week, including tribal chairman Dave Archambault, and charged with disorderly conduct for trying to block access to the work site. The tribal members are protesting the pipeline’s crossing of the Missouri River near the reservation boundary for fear it will rupture and contaminate their water, water downstream and disrupt sacred historic sites.

The sheriff confirmed that a federal court judge — at the request of Dakota Access Pipeline — signed a restraining order against previously arrested protesters from returning to the pipeline location.

In a situation of historical irony, after the work shutdown, law enforcement pulled back from the protest site on Highway 1806 to a communication command center at Fort Lincoln State Park. The park preserves the fort from which the cavalry and Lt. Col. George Armstrong Custer left to never return after a fatal battle against the Sioux. A replica of Custer’s captured flag was flying among others representing some of the 25 to 30 estimated tribes that have arrived to support Standing Rock since the protest started last week.

Another reason to pull back toward Mandan was to get into range of reliable cell phone service. Many at the protest scene believe cell towers are being purposely jammed to prevent communication, but North Dakota Highway Patrol Cap. Eric Pederson said there is no truth to the rumor.

With the growing numbers of protesters — now at least 500 to 600 — a second protest camp was established late Monday night on low land just south of the Cannonball River, and tents, buses and tipis were scattered around a central kitchen and check-in tent. An original spirit camp was set up months ago in protest.

Cheyenne River Sioux Tribal chairman Harold Frazier arrived with several busloads of his tribal members Tuesday afternoon and said it’s the biggest such gathering of Native tribes he can recall, with representatives from tribes coast to coast and Canada.

“Things are going well, with the construction stopped. I think it should stay stopped and let the courts settle it,” Frazier said. “I believe we will stop it.”

Frazier said he and Archambault were cooperating to ensure there is adequate food and shelter for everyone arriving to support Standing Rock.

Back at the protest site — closest to where the pipeline is being staged for boring under the Missouri River — the scene was relatively quiet and peaceful through the day.

One of the Sioux’ most holy men, Arvol Looking Horse, the 19th successive keeper of the sacred White Buffalo Calf pipe, led hundreds in prayer at the gated entrance to the pipeline route.

The prayers, burning sage and sounds of drumming were intended to restore a protest based on prayer and peaceful objection, amid worries that not everyone can be controlled in such a large, fast-moving situation and as arrests continued to mount. Men, women and children sang the old language and turned as one to the four corners of the universe. Cameras were forbidden during the ceremony.

Tribal member and former councilman Tim Mentz said the prayers were at the request of Archambault.

“The chairman asked to go back to prayer, to ask for peace and safety and that we can accomplish what we are here to do,” Mentz said. “It’s for one thing: the safety of everyone. We’re all praying for the same thing.”

After the prayers, the access gates were propped open and the protesters walked the construction route on private land down to the Missouri River below, a hot walk in nearly 85-degree temperatures. Many walked, some rode horses and others rode in the back of pickups, intent on making contact with the water a half-mile away.