At midnight Eastern time, NBC News pulled the plug on BreakingNews.com, one of the most visited websites in the world for breaking news. The site had more than 3 million likes on Facebook, 9 million Twitter followers, and will be missed by many journalists. 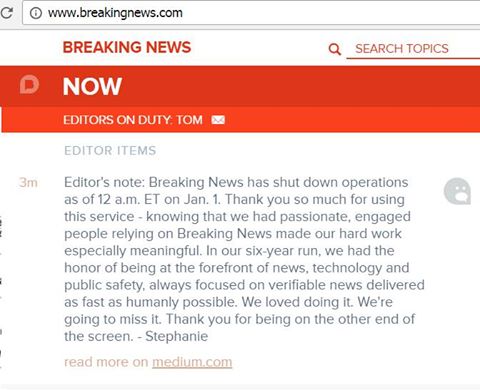 On December 13th, the editors of Breaking News unexpectedly announced that NBC News had decided to shut down their website.

NBC News said the decision came down to revenue.

“Unfortunately, despite its consumer appeal, Breaking News has not been able to generate enough revenue to sustain itself,” explained Nick Ascheim, the senior vice president of digital for NBC News, in a letter to the Breaking News staff.

“We have therefore made the hard decision to close its operations so that we can re-invest that funding into NBC News’ core digital products to help us achieve our ambitious goals for those businesses.”

The extremely-talented team is now looking for work, and they’ve asked that we please share this article to help because they don’t have a job!