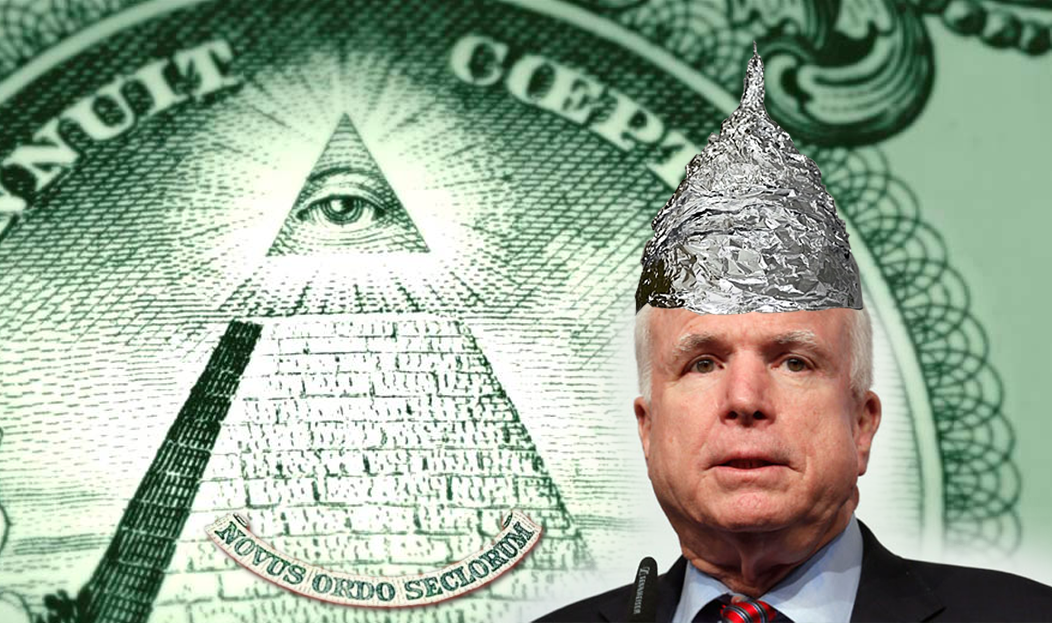 The term “New World Order” has been ridiculed as a conspiracy theory, tainted with so-called fringe but John McCain, a sitting Senator, has just claimed that the “New World Order is under enormous strain.”

McCain has reaffirmed his longstanding commitment to the European Union and NATO. Acting as a shadow President of the U.S, Arizona Senator McCain visited the Brussels Forum, a conference organized by the German Marshall Fund, a transatlantic think tank where he spoke and stated: “In a new world order under enormous strain” and in “the titanic struggle with forces of radicalism we can’t stand by and lament, we’ve got to be involved.”

The EU Observer reported that McCain said that the E.U. and U.S. need further cooperation and “more connectivity.”

“I trust the EU,” McCain told the conference, making it clear that he stands directly against everything that President Trump has so far stood for. “We need to rely on NATO and have a NATO that adjusts to new challenges,” he continued.

Amazingly, McCain admitted that the so-called “New World Order” is under “enormous strain”, possibly alluding to the fact that millions of people across the world are beginning to rebel against the globalist system that he helped design, as evidenced by Brexit and the stunning surprise election of political outsider U.S. President Donald Trump.

In December, McCain stated on Fox that “Russia was threatening the 70-year-old New World Order that was established after WW2” preaching that Russia had hacked the election and stating it as definitive fact. A false claim despite still ongoing probes by the FBI if Russia influenced, hacked or subverted the American election process.

Claims that have now been debunked by the FBI Director James Comey, NSA Director James Clapper and others who have now openly proclaimed under oath that, “there was no evidence that Russia influenced the election and hacked election machines in anyway.”

[RELATED: FBI Director Comey To Trump: No Evidence The Russians Influenced the Election]

Then last month, McCain took a secret trip to northern Syria, to speak with American military officials and Kurdish fighters who are at the forefront of the push to drive Islamic State out of their de facto capital of Raqqa.

The words “New World Order” have been repeatedly echoed through history by several politicians including the likes of Henry Kissinger, Jacob Rothschild and the now deceased David Rockefeller.

The phrase is most notably heard being said by former President George H.W. Bush when he stated:

“We have before us the opportunity to forge, for ourselves and for future generations, a New World Order. A world where the rule of law, not the law of the jungle, rules all nations. When we are successful–and we will be–we have a real chance at this New World Order. An order in which a credible United Nations can use its peacekeeping forces to fulfill the promise and vision of its founders.”
—George H.W. Bush, March 21, 1991

So who pulls your strings McCain? Who is the puppet master behind this New World Order?