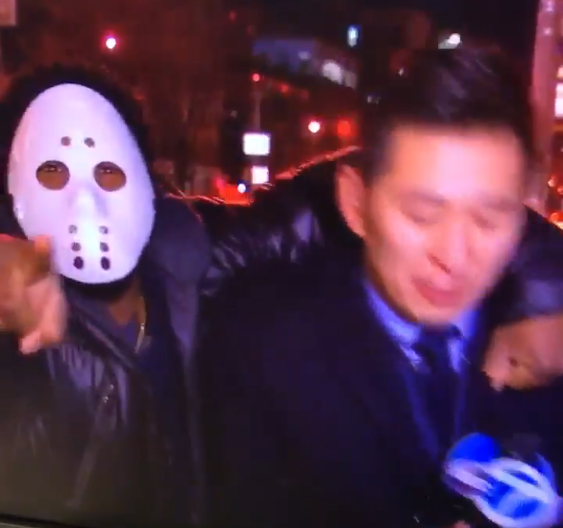 During a live broadcast New York ABC7 reporter CeFaan Kim was assaulted and punched in the face by an unknown man in a Jason mask.

This is the man who attacked me last night during a live broadcast. If anyone has seen him around please give the 7th precinct a call. pic.twitter.com/enkqQe0mxC

Kim was reporting at a local bar as indicated by the clip, “among the bustle of all the countless bars here open late,” Kim reported in the video.

Suddenly, a man wearing a Jason mask looking for a bit of fame or fun approached Kim from behind and put his arm around him, pretending to be friendly.

“What up this is Jason check out my video you already know.”

The camera cut away from him and the man in the Jason mask called for the camera to be put back on him. The situation quickly turned hostile and the attacker began punching Kim in the face.

“Whats up, whats up,” the man said as he pushed Kim and then punched him.

A witness can be heard screaming “Oh my God,” as the assailant removes the Jason mask.

Two men then try to break up the fight repeating “Don’t fight,” telling the two men to break it up with one man holding back Kim.

New York police are looking for the attacker seen in the video above.

Was this just a drunken hooligan looking for fun – or an assault on the “fake news” media?