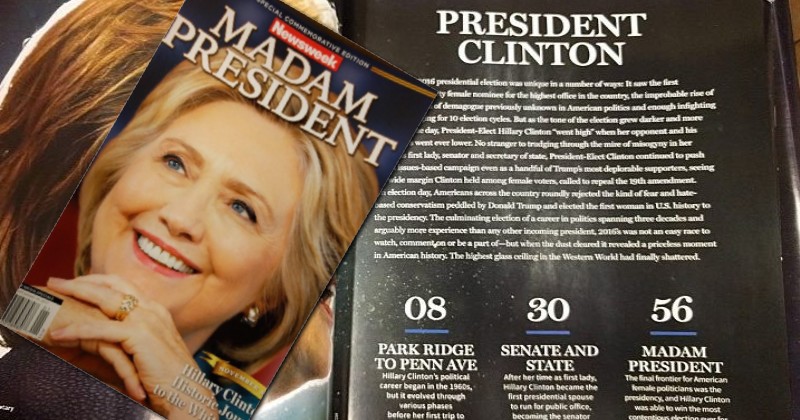 In a highly embarrassing mess-up, the outlet was forced to recall 125,000 copies of the edition which was sent out to stores and newsstands around the country. They reportedly even had Hillary Clinton autograph a number of copies of the edition (as seen in the Getty Images licensed photo below). 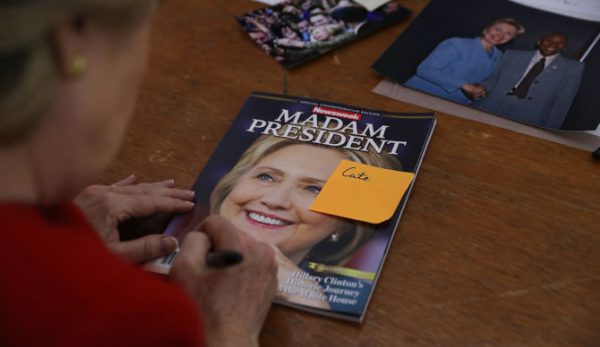 The blurb on the back cover of the edition, which was shipped out for distribution before the presidential winner had been officially announced, included such highly arrogant lines as…

“On election day, Americans across the country roundly rejected the kind of fear and hate-based conservatism peddled by Donald Trump and elected the first woman in U.S. history to the presidency.”

“MADAM PRESIDENT: The final frontier for American politicians was the presidency, and Hillary Clinton was able to win the most contentious election ever for the honor of crossing it.”

The blurb also called supporters of Trump, “most deplorable” and accused them of going “lower” while Hillary’s supporters “went high.”

Newsweek political editor Matt Cooper, who called the whole controversy an “embarrassment”, was quick to defend the fact that his organisation had nothing to do with the writing or proof-reading of the edition.

“The writing in this is, shall we say, not up to the editorial standards of Newsweek,” Cooper said, adding “no one on our staff wrote it. We subcontract out to a company.”

“But when you read it before it went out, what did you say?” Carlson asked.

“Well, no, we didn’t [read it],” Cooper replied. “We subcontract these commemorative issues to a company … so it’s sort of been done on a separate track, and we did not review it before it went out.”

To his credit, Cooper added that even though none of the magazine’s editors read the piece, Newsweek is still “ultimately responsible” for what is printed under its brand.

“Look, I hear you, it’s got the Newsweek name on it. Ultimately, we’re going to bear responsibility for it,” Cooper said.

“But what if they had reprinted Mein Kamf or something?” the host Tucker Carlson asked to which Cooper replied, “well that would be even worse.”