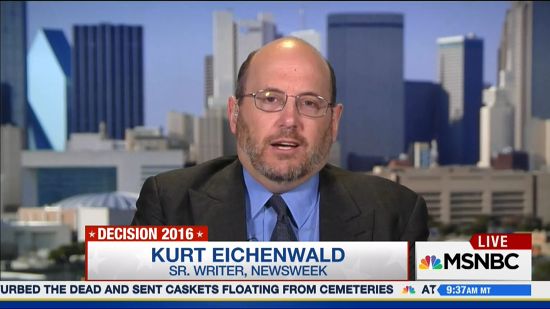 Kurt Eichenwald, a Newsweek senior writer and the guy who just subpoenaed someone for being trolled on the internet with flashing lights, is now threatening journalist Bill Moran over allegations that Eichenwald viewed child pornography after paying to acquire it – and then turned his criminal activity into a “cause du jour.”

Citing dozens of court records, Bill Moran reported in his article on medium.com:

Moran then says that Eichenwald turned his criminal activity into a “cause du jour” writing the following piece for the New York Times – Through His Webcam, a Boy Joins a Sordid Online World. Moran alleges that Kurt Eichenwald, sent a check on June 8 to Justin Berry for $2,000, despite Eichenwald saying he didn’t introduce himself to the young man until he met him at LAX airport on June 30th, citing court records for another case Day 1 of Testimony in Trial of Ken Gourlay.

Moran further adds, Kurt himself had “administrative access to the websites on June 3rd,” just a few days prior to sending a check to Berry.

Those files further show that Kurt Eichenwald was granted administrative access to Berry’s previously defunct websites on June 3 and had sent Berry a check for $2,000 from Mr. Eichenwald’s personal account bearing his name on June 8. This is important because it directly contradicts his testimony that Berry did not know who he was until June 30.”

It doesn’t end there though, as Moran connects Eichenwald to two email addresses and two aliases used by Eichenwald  “mostin2003@yahoo.com” and “skywrite55@aol.com” who he says used the pseudonyms – Andrew/Ray McDonald, citing court records. Moran then goes on to state that in the PayPal financial exchange notes Eichenwald wrote, “the quality of images sent by Justin Berry—“the light sucks, washed out” and “If I save them, I pay for them. If I don’t, I didn’t even bother to finish looking at them, so I didn’t buy.” Then in another note, Eochemwald wrote, “Once it’s back and running, I’ll be back to downloading… and paying you. I’ll be online today. Find me an[d] lemme know what to do. And I have other proposals for you that would get you even more money.”

“Andrew McDonald” using the email address “mostin2003@yahoo.com” made $1,184 in payments to Justin Berry from 6/6/2005 to 6/23/2005. In the payment memo section, the user criticized the quality of potentially illicit images sent to him?—?court records confirm that account belonged to Eichenwald,”

On June 6, 2015, in the comment section of the PayPal exchanges, Kurt Eichenwald bearing the name of Andrew McDonald says of the quality of images sent by Justin Berry?—?“the light sucks, washed out” and “If I save them, I pay for them. If I don’t, I didn’t even bother to finish looking at them, so I didn’t buy.”

That comment “I have other proposals for you that would get you even more money.” May be revealed in a statement that “Justin Berry’s 14-year-old protege from the JustinPreview2.wmv video had testified to the FBI that Kurt Eichenwald promised Justin Berry a $500,000 book deal.”

That offer even materialized but ultimately was declined because it came with a condition that Berry not appear on Oprah which he did alongside Mr. Eichenwald.

The worse part is that all of this according to Moran just like the Jeffrey Epstein case was covered up by the DOJ when Eichenwald’s attorney Stephen M. Ryan sent a letter on behalf of Justin Berry seeking a proffer agreement “flip state’s evidence” in return for immunity. Then that same day Eichenwald’s account was deleted by an administrator on Berry’s site. Additionally, Berry attempted to scrub his computer of all communication exchanges between himself and Eichenwald.

A series of strange events occurred on July 14, 2005?—?the day that Stephen M. Ryan, Esq., at the behest and urging of Kurt Eichenwald, transmitted a letter to the Department of Justice on behalf of Justin Berry?—?seeking a proffer agreement (flip state’s evidence) in return for immunity.

First and foremost, court records indicate that on that same day Eichenwald’s account on JustinFriends.com was administratively deleted. That same day, Justin Berry attempted to scrub his computer on that date of all communications between himself and Eichenwald.

It is further known from court records that the same attorney, Stephen M. Ryan, Esq., represented Kurt Eichenwald “in connection with these allegations” with refererence to the testimony proffered by Justin Berry in return for his immunity.

These are allegations that Eichenwald has since strongly denied in emails to Moran that Moran has been posting on Twitter. Again, Kurt Eichenwald is the same journalist suing a Twitter user for allegedly causing him to have a seizure.

It’s also worth noting that many child sex felons were arrested and prosecuted due to Kurt Eichenwald, but was he playing multiple online personas or just saving his own hide at the expense of throwing others under the bus? You decide as all the evidence is quite damning in my own opinion.