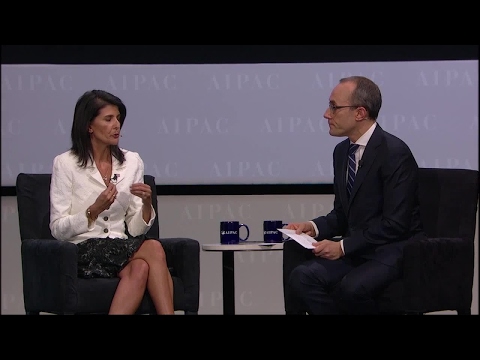 U.S. United Nations Ambassador Nikki Haley has proclaimed that the U.S. won’t allow former Palestinian Prime Minister Salam Fayyad to secure “one of the highest positions” at the UN.

In a speech expressing her support for Israel at the AIPAC conference, Haley explained why the U.S. had blocked a former Palestinian prime minister’s appointment to lead the UN’s Libya mission. She further noted that the Trump administration “was disappointed” by UN Secretary-General Antonio Guterres’ intention to appoint Fayyad as the UN’s next special representative to Libya.

“So when they decided to try and put a Palestinian former Palestinian Prime Minister Salam Fayyad in one of the highest positions that had ever been given at the UN, we said no and we had him booted out,” Haley said at the annual Policy Conference of the American-Israel Public Affairs Committee (AIPAC) on Monday.

Haley also said that until Palestine “comes to the table, until the UN responds the way they’re supposed to, there are no freebies for the Palestinian Authority anymore.”

She additionally stated that when the UN passed a resolution demanding an end to Israeli settlement building on occupied Palestinian land, “the entire country felt a kick in the gut.”

“Never do we not have the backs of our friends. We don’t have a greater friend than Israel. And to see that happen was not only embarrassing, it was hurtful,” Haley said.

Haley also criticized a report released in March, in which author Richard Falk, a Princeton professor emeritus, described Israel as an “apartheid state” which Israel demanded a retraction on and the director resigned.

“For too long, the UN has been unfairly biased in favor of the Palestinian Authority to the detriment of our allies in Israel,” Haley said.

“And a ridiculous report, the Falk Report, came out. I don’t know who the guy is or what he’s about, but he’s got serious problems. Goes and compares Israel to an apartheid state. So the first thing we do is we call the secretary general and say, this is absolutely ridiculous,” she said.

Palestine’s independence has been recognized by 136 of the 193 UN member nations so far.

Ambassador Nikki Haley stated that the days of “Israel-bashing are over we won’t turn a blind eye anymore.”