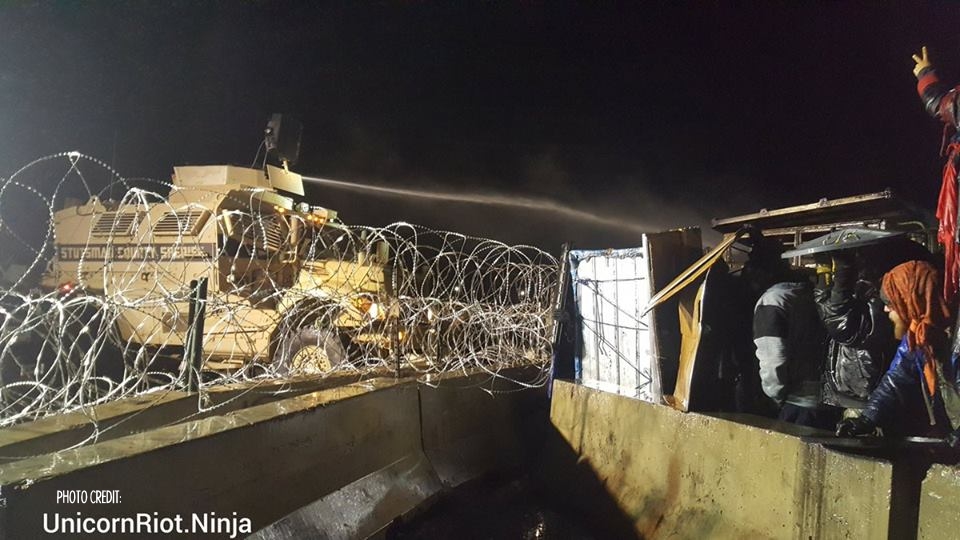 UPDATE: 1:15 a.m. EST, Nov. 21, 2016: Indigenous Rising Media reported that according to the head medic of the Oceti Sakowin Camp, at least 167 demonstrators have been injured so far after NoDAPL protesters were confronted by militarized police Sunday night.

The report claims that police are targeting demonstrators’ heads and legs, and that seven people have been hospitalized for severe head injuries.

Police are spraying #NoDAPL protesters with tear gas, using the LRAD stinger grenades, and firing rubber bullets into the crowd on the Highway 1806 bridge in North Dakota.

Police have formed a line with armored vehicles, concrete barriers, and razor wire. It is below freezing at about 27 degrees, and police have begun hosing down the unarmed crowd with a water cannon. Water protectors are using a semi truck in an attempt to remove burnt military vehicles, which the police chained to concrete barriers weeks ago to keep the bridge blocked on that highway.

.@POTUS this is what happens when you wait "several more weeks". Water protectors are being sprayed with water in 26 degree weather. #NoDAPL pic.twitter.com/jT5vId31Mm

Protesters demonstrating against the Dakota Access Pipeline posted that police were trying to shoot down their drone, in Cannon Ball, South Dakota, on Sunday, in an effort to prevent them from documenting the protest

*Special thanks to Unicorn Riot For being on the front lines and for the assistance and permission to use footage and social media content for this article. #ThankYou #Salute

This article made possible by…