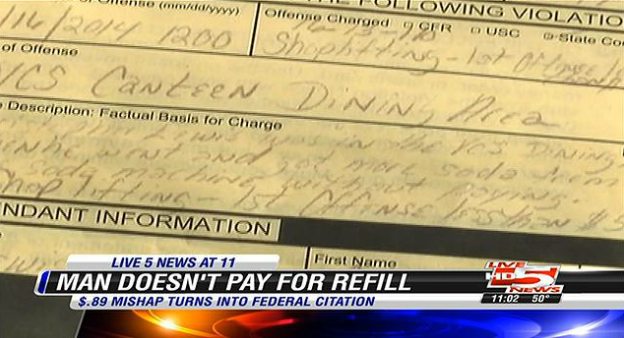 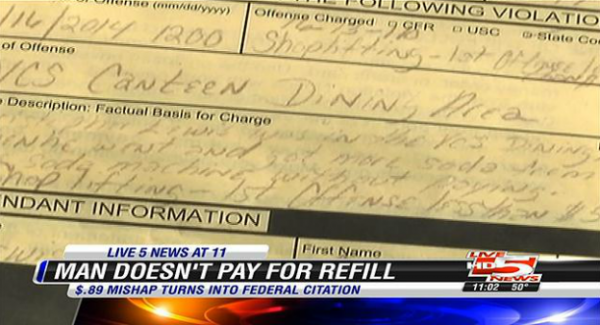 A North Charleston man was hit with a federal fine for refilling his drink without paying. The on-site construction worker says he didn’t know refills at the VA Medical Center in downtown Charleston came at a price, and Wednesday, during his lunch hour, he was slapped with federal charges.

The ticket was issued by the Federal Police Force at the VA Medical Center in downtown Charleston after Christopher Lewis refilled his soda without paying the $0.89. A hospital spokesperson called it a “theft of government property.”

“Every time I look at the ticket, it’s unbelievable to me,” says Lewis, who works construction. “I can’t fathom the fact that I made a $0.89 mistake that cost me $525.”

Lewis is now out of a job. According to a hospital spokesperson, signs are posted in the cafeteria informing patrons that refills aren’t free. Lewis says he never noticed the signs and admits he had refilled his drink without paying on other occasions. He says after he went back for seconds on Wednesday, a man who identified himself as the chief of police, stopped him.

“As I was filling my cup up, I turned to walk off and a fella grabbed me by the arm and asked me was I going to pay for that, and I told him I wasn’t aware that I had to pay for that.”

Lewis says he tried to pay the $0.89 right there, but wasn’t allowed to. He says he wasn’t given the chance to pay the cashier either.

“I never had an option to make right what I had done wrong.”

He says he was taken to a room, given the $525 ticket for shoplifting and told not to return to the property.

“I’m done there, at the VA hospital. I’m not allowed to go on the premises anymore. I asked him can I still work on the job site and just bring my lunch and not got to the cafeteria and he said he wanted me off the premises.”

A hospital spokesperson says it was her understanding that Lewis was aggressive during the confrontation.

The Ralph H. Johnson VA Medical Center is fortunate to have a highly trained Federal police force to ensure the safety of our patients, visitors and employees. As Federal police they are responsible for enforcing the law. Today a Federal citation was issued for shoplifting in the VA cafeteria to an individual who stated to VA police he had not paid for refills of beverages on multiple occasions, even though signs are posted in the cafeteria informing patrons refills are not free. Shoplifting is a crime. The dollar amount of the ticket is not determined by VA as it is a Federal citation. The citation may be paid or the recipient may choose to appear in Federal court to contest it.

Lewis and his fiancé have contacted the Internal Affairs Office in Columbia. He says he will contest the fine in federal court.

“It’s about pretty much I guess you would say getting your face back. I want everybody to know that I made a simple mistake, that I’m not a thief, that I’m not dishonest. I’m trying to do the right thing.”