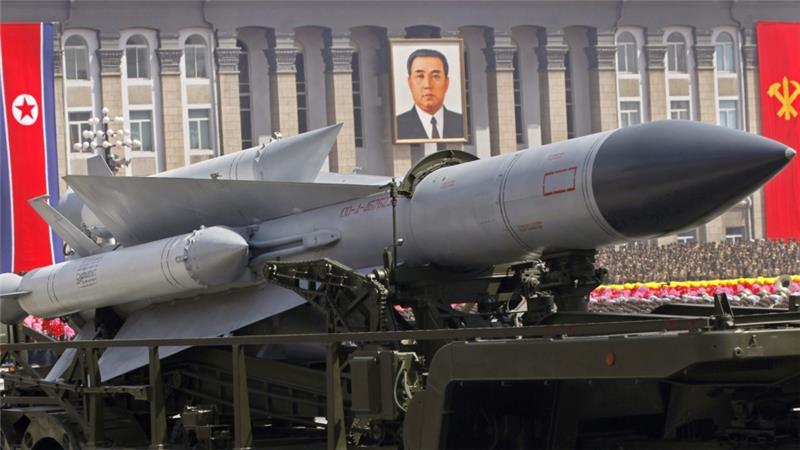 North Korea has fired its first test launch of a ballistic missile since President Donald Trump  took office, challenging his administration and how they will respond.

The incident occurred at the same time as a meeting between Trump and Japan’s Prime Minister Shinzo Abe was taking place in the U.S at Trump’s Mar-a-Lago club in Palm Beach, Fla.

The missile flew east towards the Sea of Japan for about 300 miles, South Korean officials said, according to the BBC.

The missile is suspected to be a modified version of the North’s intermediate-range ballistic musudan missile according to the United States Strategic Command which issued a statement that determined the missile “did not pose a threat to North America”.

Trump reassured Abe that “America stands behind Japan, its great ally, 100%”, with Abe expressing that the test was “absolutely intolerable.”

“We see this as part of an attempt by the North to grab attention by demonstrating its nuclear and missile capabilities and to counter the new United States administration’s strong policy line against North Korea,” the South Korean military said in its statement.

Adding that the provocation was “aimed at drawing global attention to the North by boasting its nuclear and missile capabilities.”

“It is also believed that it was an armed provocation to test the response from the new U.S. administration under President Trump,” the defense ministry said.

NATO also condemned the missile test, Secretary General Jens Stoltenberg urged North Korea “not to raise tensions further and to re-engage in a credible and meaningful dialogue with the international community”.

China, North Korea’s closest ally, in the region has yet to comment.

Trump previously mocked a threat from North Korea who said they were developing a nuclear weapon capable of reaching parts of the United States, “It won’t happen,” Trump tweeted.

North Korea just stated that it is in the final stages of developing a nuclear weapon capable of reaching parts of the U.S. It won't happen!

North Korea conducted two nuclear tests and dozens of rocket launches last year in continued efforts to expand its nuclear weapons and missile programs which so far have failed.

The Trump administration later responded, “we are going to reinforce and strengthen our vital alliances in the Pacific region as part of our strategy to deter and prevent the increasing hostility that we’ve seen in recent years from the North Korean regime,” White House advisor Stephen Miller said on a Fox News interview.

While an anonymous official added, “This was no surprise, the North Korean leader likes to draw attention at times like this,” Reuters reported.

Is North Korea a legitimate threat to the U.S., and is everyone underestimating them, or is this just Kim Jong-un displaying his power to his people?  Let us know in the comment section below!