Obama at Holocaust event: We are all Jews; we must all fight anti-Semitism, evil 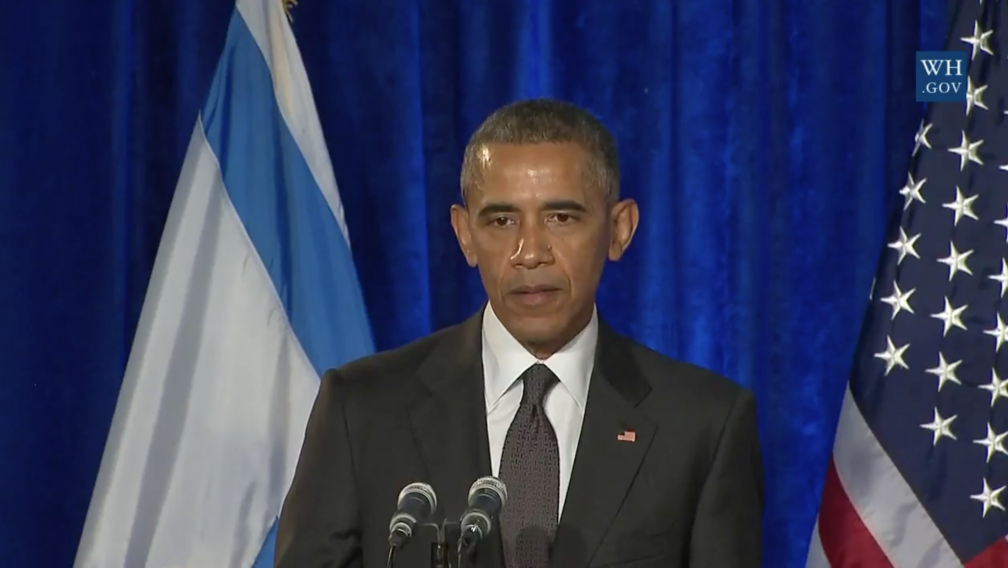 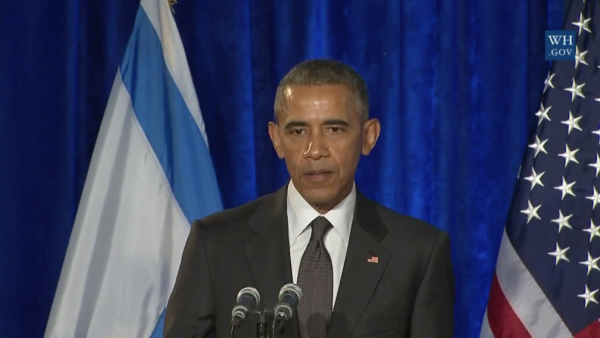 US President Barack Obama delivered a resounding denunciation of anti-Semitism, and a fierce defense of “our ally, our friend” Israel, at a Holocaust Day ceremony at the Israeli Embassy in Washington on Wednesday evening.

America’s commitment to Israel’s security “remains now and forever unshakeable,” he declared. “It would be a fundamental moral failure if America broke that bond.”

He lamented that anti-Semitism is again on the rise, with families leaving Europe because they no longer feel safe. “Even as the Holocaust is unique, a crime without parallel in history, the seeds of hate that gave rise to the Shoah… have always been with us,” he said.

The president attended the ceremony honoring four people, including Americans from Indiana and Tennessee, for risking their lives to protect Jews during the Holocaust. He was the first sitting president to attend the ceremony.

Righteous Among the Nations medals were presented posthumously to the families of the four.

Ambassador Ron Dermer welcomed Obama to the event, calling his presence “a powerful tribute to the memory of the victims.”

Prime Minister Benjamin Netanyahu addressed the gathering by satellite, and praised Obama for his commitment to ensuring Israel’s security.

Introducing Obama, director Steven Spielberg spoke of Obama’s “Jewish soul,” as evidence by his support for Israel and denunciation “of hatred in every form.”

Said Spielberg: “The president makes sure that phrase ‘Never Again’ is not an empty declaration.”

Obama hailed the four honorees, “whose courage is measured in the lives they saved.”

He recalled visiting Israel’s Yad Vashem, and taking his daughters to the Washington Holocaust museum — “because our children must know this chapter of our history, and that we must never repeat it.”

People are too often willing to give in to “a base desire” to blame others for their struggles, he added.

‘We are all Jews, because anti-Semitism is a distillation, an expression of an evil that runs through so much of human history. And if we do not answer that, we do not answer any other form of evil’

“We must not be silent. An attack on any faith is an attack on all of our faiths,” said Obama. “For Americans in particular, we should understand that it’s an attack on our diversity — on the very idea that people of different backgrounds can live together and thrive together.

“We are all Jews,” the president said, “because anti-Semitism is a distillation, an expression of an evil that runs through so much of human history. And if we do not answer that, we do not answer any other form of evil,” he said, repeating, “We are all Jews. We know that we’ll never be able to wipe out hatred from every single mind. We won’t entirely erase the scourge of anti-Semitism. But like the Righteous, we must do everything we can.”

Relating to Israel in this context, Obama said: “It’s why when voices around the world veer from criticism of a particular Israeli policy to an unjust denial of Israel’s right to exist, and when Israel faces terrorism, we stand up forcefully and proudly in defense of our ally, in defense of our friend, in defense of the Jewish state of Israel.”

He also hailed Israel’s President Reuven Rivlin for speaking out eloquently for tolerance and “acceptance among all Israelis, Jewish and Arab.”

Obama said “evil can flourish if we stand idly by, so we’re called to live in a way that shows we’ve actually learned from our past… to make common cause with the outsider, the minority, whether that minority is Christian or Jew, whether it is Hindu or Muslim or non-believer, whether that minority is native born or immigrant, whether they’re Israeli or Palestinian. It means taking a stand against bigotry in all its forms and rejecting our darkest impulses….

“That’s how we never forget,” said Obama. “Not simply by keeping the lessons of the Shoah in our memories, but by living them in our actions. As the Book of Deuteronomy teaches us,” he said, “Justice, justice, you shall pursue…”

“May the memory of the lost be a blessing. And as nations and as individuals may we all strive to be among the Righteous. God bless you. God bless the United States of America. And God bless the State of Israel,” the president concluded.”

Recognized posthumously at the ceremony for protecting Jews from harm during the Holocaust were Roddie Edmonds of Knoxville, Tennessee; Lois Gunden of Goshen, Indiana; and Polish citizens Walery and Maryla Zbijewski of Warsaw. The honors were bestowed by Yad Vashem, the world’s Holocaust education and research center, based in Jerusalem.

Each was designated Righteous Among the Nations, an official title awarded by Yad Vashem on behalf of Israel and the Jewish people to non-Jews who risked their lives to save Jews during the Holocaust.

Edmonds, a master sergeant, participated in the landing of U.S. forces in Europe and was taken prisoner by the Germans. When the Germans ordered all Jewish prisoners of war to report, Edmonds defied the order by figuring out how to keep the Jewish POWs from being singled out for persecution.

Gunden, a French teacher, established a children’s home in southern France that became a haven for children, including Jews she helped smuggle out of a nearby internment camp. She protected the children when French police showed up at the home.

The Zbijewskis hid a Jewish child in their Warsaw home until the girl’s mother could take her back.

Obama at Holocaust event: We are all Jews; we must all fight anti-Semitism, evil