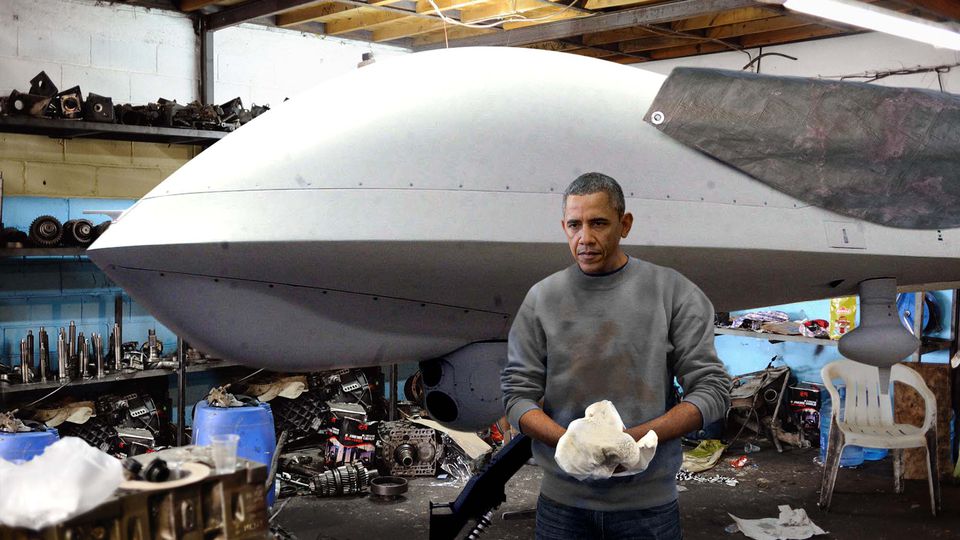 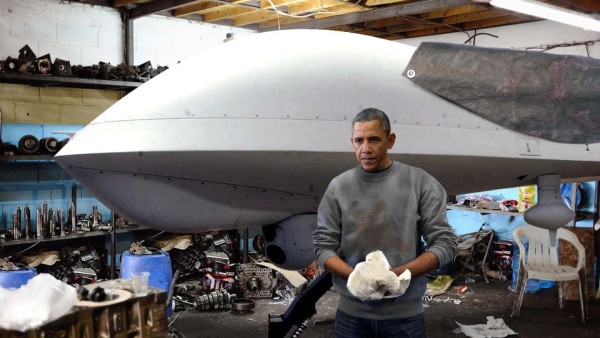 WASHINGTON—Taking his time to thoroughly clean a pair of replacement carburetors and install them on a turbocharged Rotax engine as classic rock tracks blared from a nearby transistor radio, sources confirmed that President Barack Obama spent most of Wednesday afternoon in the White House garage continuing his restoration of a vintage military drone.

Pausing every so often to admire his work, the president, dressed in jeans and a grease-stained Champion sweatshirt, explained that he has been tinkering with the 1995 RQ-1 Predator since acquiring it from a military scrapyard two years ago. The commander-in-chief said he considers the salvaged unmanned aerial vehicle a prized find, as the United States only produced 12 of the classic airframes for their inaugural deployment in the Bosnian War.

“Now this baby right here is 1,300 pounds of pure American muscle,” Obama said as he tossed a socket wrench aside and wiped the oil from his hands. “From the single rudder steering to the inverted V-tail at the back, it’s all classic General Atomics engineering. Real beaut, isn’t she?”

“I mean, look at this pretty little antenna dome,” he continued, buffing the drone’s satellite communication housing with a shammy cloth. “They just don’t make UAVs like this anymore.”

After popping the cap off of a fresh Rolling Rock, the 44th president of the United States explained that in an effort to maintain its mid-’90s authenticity, he is rebuilding the craft using mostly original RQ-1 parts ordered either directly from the manufacturer or traded with other collectors online. The head of state added that he has come to prefer the latter, saying that it provides him an opportunity to meet and talk shop with fellow “drone-heads.”

“When I’m done, she’s gonna have all the bells and whistles of the original; I’m talking Moving Target Indicator, APX-100 Friend-Or-Foe transponder, heat sensor, laser designator—the whole enchilada,” Obama said, standing next to a faded poster from the 1994 Sports Illustrated swimsuit issue. “And, if I can pick one up on the cheap, I’m hoping to put in a top-of-the-line GPS, too.”

“With a set of souped-up avionics like that, you can really open her up once you hit international airspace,” he continued.

The president, who confirmed that he planned on sanding down the tail the next time he has a free weekend, said that after installing custom titanium wing linings, his next project will be to apply a coat of gunmetal gray paint to the vehicle’s body in order to get “that timeless Predator look.”

Obama later mentioned, however, that he hasn’t completely ruled out one day upgrading the paint job to pure white or even MARPAT desert camouflage, which he claimed would “turn a few heads” and make the shell’s classified carbon-Kevlar composite “really pop.”

“Of course some of these mods aren’t exactly regulation,” the sitting president said with a wink, referring to the set of AGM 114-Hellfire missiles his friend, a retired Air Force weapons specialist he would only identify as “Spud,” helped him install last fall. “I also stripped off her Synthetic Aperture Radar to compensate for the added weight, which just means you have to be a little more careful when the weather’s bad.”

“These old Predators are highly temperamental, so you’ve got to know how to treat ’em right,” he continued, adding that he wouldn’t dream of running one with anything less than a 50-50 blend of JP-8 and Syntroleum jet fuel. “Normally people can only get these things to do about 135 at a max altitude of 25,000 feet, but with a little TLC I’ll bet I can juice her up to at least a buck fifty-five, buck sixty.”

Obama boasted that the finished work would harken back to the “glory days” of drones, when he says American ingenuity dominated the skies over the Balkans. Noting that back in that era Predators were the drone of choice for Operation Nomad Vigil, the nation’s chief executive reflected on the machines’ superior handling and reconnaissance capabilities, lamenting that today’s newer models with their “flashy AN/AAS-52 Multi-Spectral Targeting Systems” seem only to be focused on precision strikes against high-value terrorist targets.

The two-term president told reporters he does not intend on selling the drone once it is finished, acknowledging that in addition to its sentimental value, he likes the idea of taking it out for a spin on the occasional Sunday morning or showing it off to some of his older NATO buddies who remember the vintage UAVs from back in their earlier peacekeeping days.

“Michelle sometimes tells me I’m spending too much time and money on this thing,” Obama said. “But I’ve told her that this has always been my passion, that this is what I love to do. At the end of each day, all I’m thinking about is getting in this garage, sliding onto my mechanic’s dolly, and getting to work bringing this baby back to deployment condition.”

“What can I say?” the president added. “I just really connect with these machines.”

According to sources, after testing and recalibrating the propeller, the president spent another hour cleaning up the scraps of metal and foam shavings from his worksite. Observers say Obama then stood in the doorway staring reverently at the drone for several moments before turning off the light and slowly heading inside.