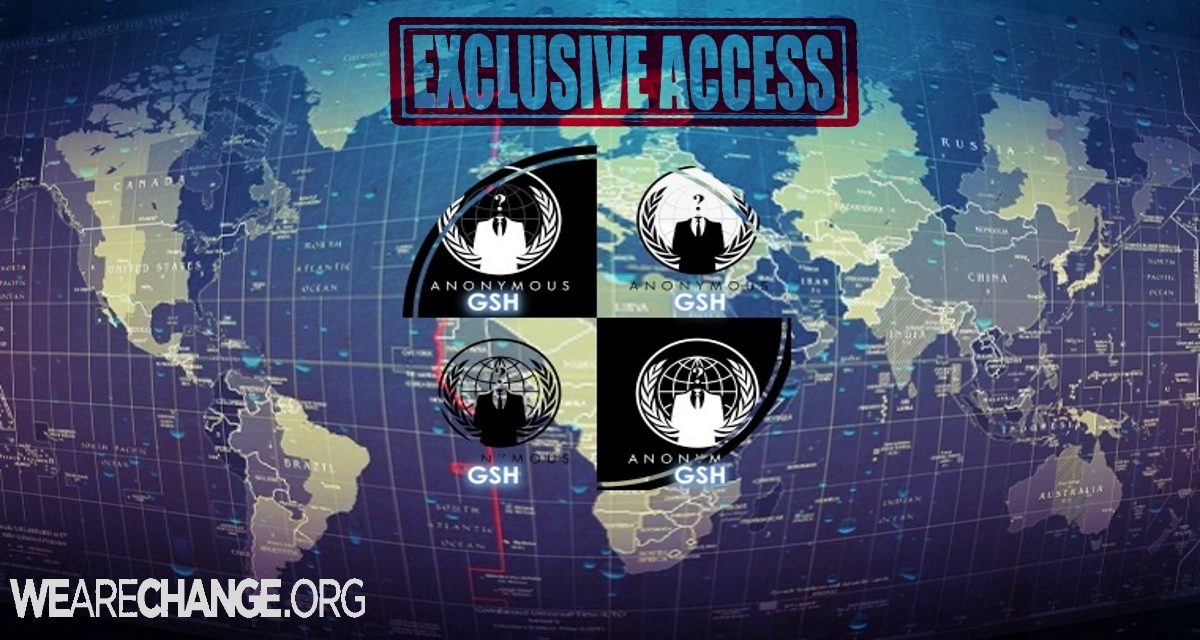 EXCLUSIVE: Interview with Anonymous #OpIcarus the Operation Against Central Banks 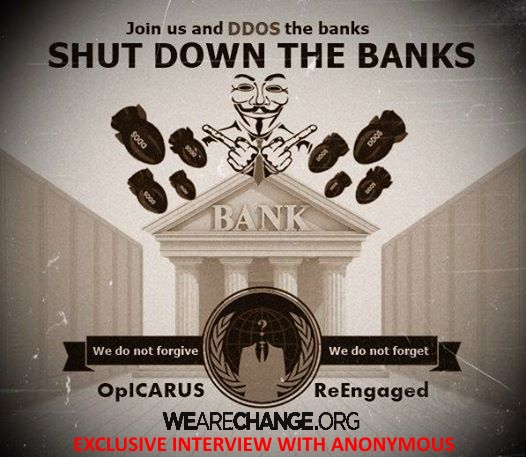 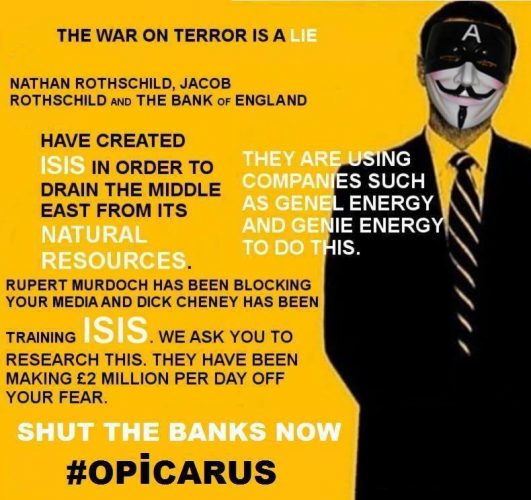 Recently I spoke with a known Hacktivist and member of the Anonymous collective, who claims to have directly contributed to Operation #Icarus by successfully  (DDoS) taking down 9 major banks over Memorial Day weekend.

He agreed to the interview on the condition of Anonymity, but proved his claims to me by sending me several screen shots.

The mainstream media has been quiet about the operation and some Anons have distanced themselves from the operation calling it an attack against innocent civilians.

When I asked, “What’s the reason for the Op?,” the hacktivist Anon said it was

“Anything but an attack against innocents. It was geared specifically toward the Central Banks, the Rothschilds, JP Morgan-Chase, and the rest of the Wall Street and banking elites. The war mongers; those that want World War 3…those who we know are funding ISIS.””

Anonymous released a list of institutions the collective plans to target, which is divided into four sections; websites associated with the U.S. Federal Reserve, the International Monetary Fund (IMF), and the World Bank, and over 150 pages associated with national banks around the globe.

He went on to say that “no one involved in the operation was targeting the innocent”. According to insiders it’s another hacking group known as Lazarus who was raiding the banks for cash. He said that “Lazarus…was working on their own accord and acting with out the general consensus of the collective Op.“ He also stated they appeared to be from Korea, and the four raids on the central banks so far this year appear to be somewhere in the $50-$100 million dollar range. He also said said “more financial attacks will be carried out this year.”

He then provided a long list of Central Banks, and connected banks that the Operation has targeted so far with DDoS Attacks, providing evidence with screen shots and claiming there is far more to come. So how effective are He claims every attack averages to about $440,000 in damages. The press release on YouTube states exactly that – the operation is against the wealthy corporations and banks. They vow to hold down Paypal, MasterCard and other credit card companies, all central banks worldwide, the Bank of International Settlements (BIS), and all stock exchanges.

Since the claims made in the press release that Anonymous was about to launch a historic attack against the finance industry, the threats and attacks have been carried out as more then 2 dozen banks have been hit by DDoS attacks already. Some members of the Hacktivist collective Anonymous have dismissed the operation, but that’s no surprise as Anonymous has always been diverse and divisive in its operations, as there are no leaders in the movement – only ideas. Ideas that people either choose to support or choose not to, its entirely up to them.

A full text of the interview is below. 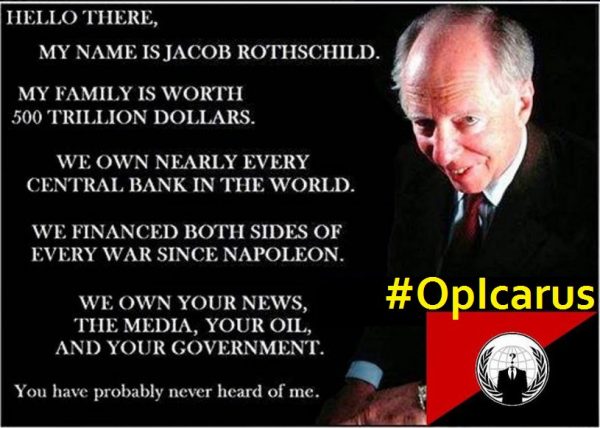 “The reason for the Op was simple. After Rothschild and the other elite ruling families had already drained us and the middle east from every resource there possibly was and then continued to butcher millions more innocent people, we decided we had had enough. We have tried protesting, some have tried voting, we have tried marching. We have tried everything. They weren’t listening to us. Perhaps when we attack all of their Central Banks, they will find it harder to ignore us.”

“It was time for something like this to happen. Many people have been waiting for such an event. The Central Banks are more afraid of the people than they are letting on.”

“We have shown them just how vulnerable they are and that at any time, they can become our target. This is a lesson they had to learn.”

“So far we have been taking the sites offline. However, with this being said, we have noticed the sudden increase in attacks on the banks since we started the event, by teams such as Lazarus who have already raided 4 banks. Team Lazarus have obviously been acting on their own accord outside of the Op itself, but we like to think that perhaps we contributed a little by pointing everyone towards the banks again. Ideas are like fires in dry woods, it only takes a small light to burn down an entire forest.”

“Its the business sites only. Our aim isn’t to hurt the ordinary man at all. With costs averaging on $440.000 per attack, with 50 banks, this has cost the central banks lots of money. Team Lazarus appear to be from Korea. They have done 4 raids on international Central Banks this year. Raids seem to be somewhere around the $ 50 – $100 million range. The US is calling it an outright attack on the financial industry. We expect this year to be full of them.”

“This year is going to be a massive year for attacks against the banks. Its either that or watch Rothschild and friends start world war 3 over Syria against the Russians and Chinese in September.”

“They’ve been in trouble since 2011, they lost a lot of family money which they are desperate to try and get back through any means necessary even to the point where they would create ISIS and then let them loose on us. They are starting to show just how vulnerable they are. Thats why I love these kind of attacks. A Ddos attack on all of Rothschild’s companies websites show the public exactly how vulnerable they are. The time of thinking they are “untouchable” is over. The moment they put their heads in the spot light with Genie Energy in Golan Heights, Syria, I knew that from that moment we would never let them go back into the shadows again. This year has to be an outright war against Rothschild and other elite ruling families. Their insane genocidal nature needs to be dealt with. They have lost touch with everything and everyone around them, and perhaps all these attacks on them, make them feel that little more human.”

“Yes. They are being hunted by many militia groups now also. Their time has come. They failed. Russia buying their independence from Rothschild banking and Iran maintaining its neutral zone has been a huge help. Also China building their economy back up the way they have done over the last decade. Yes, I can give you a list” 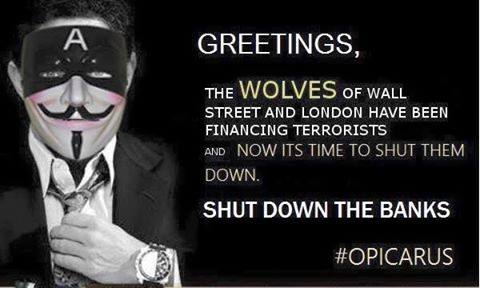 List of BANKS and GROUPS that Have Been Targeted by #OpIcarus:

Central Bank of the Republic of Azerbaijan

National  Bank of the Philippines