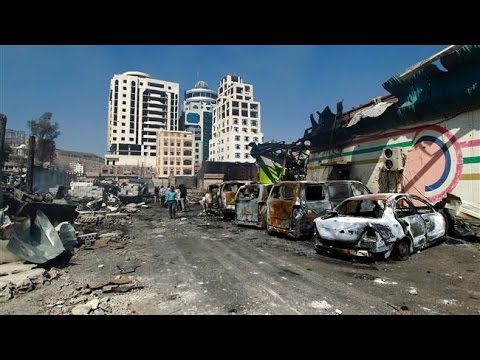 Saudi Arabia is intensifying its airstrikes against Yemen, causing more deaths and destruction in the impoverished nation.  In their latest attacks, Saudi warplanes targeted a civilian vehicle in Hajjah province killing five people there. Meanwhile, the death toll from the earlier Saudi raids targeting a hospital in the same province has risen to 15. According to Yemeni media, 20 others including foreign medical staff have been injured. The hospital is run by medical charity Doctors Without Borders, which has confirmed the attack saying it left 11 people, including an MSF staff dead. The United States has also denounced the attack and has expressed concern over the targeting of humanitarian facilities. Meanwhile, the United Nation has condemned Saturday’s deadly attack on a Yemeni school. UN Secretary General Ban Ki-moon also called for a swift investigation into the tragic incident. Earlier, Iran also strongly condemned the Saudi airstrikes on Yemeni schools and hospitals, blaming the international community’s silence for the kingdom’s QUOTE blatant crimes against humanity. Foreign Ministry spokesman Bahram Ghassemi said the Saudi regime’s desire to target defenseless children, women and the sick in Yemen knows no bound and is in violation of international law. He added that the silence of international organizations over such atrocities has further emboldened the kingdom. Meanwhile, the U-N Children’s Emergency Fund- UNICEF- has voiced concern over a surge in the death of Yemeni children. Nearly 10,000 Yemenis, mostly civilians, have lost their lives since Saudi Arabia started its war on Yemen in March 2015.

The death toll from Saudi airstrikes on a Yemeni hospital in Hajjah province has risen to 15.

Yemeni media say 20 other people have been injured including foreign medical staff of the hospital. Because of consecutive strikes by Saudi warplanes, the ambulances have failed to reach the area. The hospital is run by medical charity Doctors Without Borders. Earlier on Monday, the United Nations condemned Saudi Arabia’s bombing of a Yemeni school as a violation of the international humanitarian law and human rights. The airstrike which took place on Saturday killed 10 children dead and wounded 28 others. Since the beginning of the Saudi war on Yemen in 2015, large numbers of civilian facilities have been targeted. Nearly 9600 Yemenis, mostly civilians, have been killed in the Saudi war.