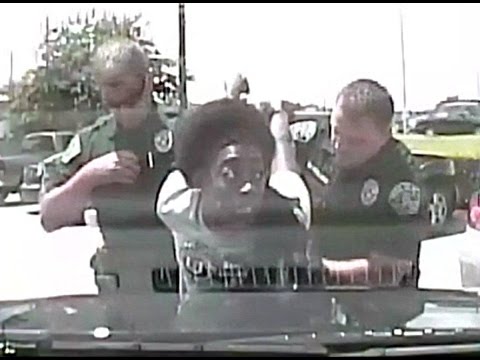 An Austin police officer was caught on camera body slamming a female teacher at a traffic stop.

The woman was complying with the officer’s orders, but the officer freaked out and pulled her out of her car and slammed her to the ground. In the ride to the police station, another officer tells the woman, “Blacks have a tendency for violence.” Both officers have been placed on administrative leave.

Breaion King was pulled out of her car and violently slammed on the concrete in June 2015. Only now has the video has just been released showing the police brutality.

Austin police officials have been investigating the incident that left a black elementary school teacher injured and in cuffs after a traffic stop went completely wrong.

The footage shows a police officer arguing with Breaion King before grabbing her out of her vehicle and violently throwing her to the ground and body slamming her twice.

In another video that followed the arrest, in the squad car a shocking conversation can be heard between Breaion King and another Officer Patrick Spradlin which turns quickly into racism.

“But do you still believe that there is racism out there?” – King asks Spradlin.

He responds “Yes, I do, But let me ask you this: Do you believe it goes both ways?”

“I don’t think that” Spradlin responds.

“A lot more people are a little afraid of black people because of everything, honestly. . .,” King says.

The conversation then takes a turn for the worst when the officer responds back.

“Let me ask you this why are so many people afraid of black people?”

“That’s what I want to figure out, because I’m not a bad black person,” King responds back.

“I’m not saying anything, I’m not saying it’s true, I’m not saying I agree with it or nothing but 99 percent of the time, when you hear about stuff like that, it is the black community that is being violent, that’s why a lot of white people are afraid. And I don’t blame them. There are some guys I look at I know it’s my job to deal with them and I know it’s probably going to get ugly and that’s the way it goes, but some of them because of their appearance and whatnot, some of them are very intimidating.”
~Officer Patrick Spradlin, Austin PD.

Police Chief Art Acevedo who is Hispanic issued an apology for his officers actions and behavior, calling the incident not consistent with his own values and many in the department apologizing to Breaion King.

“I’m sorry that on the day you were stopped for going 15 mph, you were. . . treated in a manner that is not consistent with the expectations of this police chief, of most of the officers of this department, and most importantly, of all of us as human beings. Police officers have a sworn duty to try to calm things down, approach incidents, approach people in a manner that enhances the probability that everyone gets to go on with their day, especially over a speeding ticket.” ~ Austin Police Chief Art Acevedo

He added on “For those that think life is perfect for people of color, I want you to listen to that conversation and tell me we don’t have social issues in this nation. Issues of bias. Issues of racism. Issues of people being looked at different because of their color.”

This is a huge example of why we need police reform – how many innocent people shot by cops does it take to realize that there needs to be some form of accountability and better training implemented nationwide to prevent tragedies? In this case, the victim Breaion King wasn’t killed — only violently injured, but things could have been way worse.