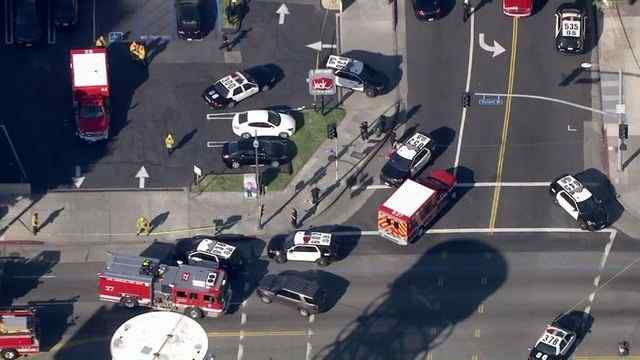 LOS ANGELES (WeAreChange) — LAPD officers fatally shot a man wielding a knife inside a Hollywood fast food restaurant on Tuesday, after he reportedly stabbed multiple people in the area.

According to the Los Angeles Daily News, the shooting was reported around 2 p.m. at the corner of Ivar Avenue and Sunset Boulevard. The Los Angeles Times has said that at least three people have been injured so far according to information from the LAPD.

CNN National Political Reporter Maeve Reston had a front row seat to the events that transpired just meters from CNN’s Hollywood bureau. She tweeted live on her verified Twitter account:

For people in LA, alleged stabbing/shooting took place near Jack-in-the-box at Cahuenga & Sunset (across from CNN tower). So avoid the area

Unclear how many stabbing victims there are, but suspect ran down Sunset Blvd. trying to stab people outside our CNN office in Hollywood

They have lifted our Lockdown here in Hollywood. Many police & fire trucks on the scene near stabbing & take down of suspect by police

LAPD Officer Sal Ramirez confirmed the suspect reportedly entered the Jack in the Box restaurant on the corner and started stabbing people inside.

Officers responding to the scene confronted the suspect inside the restaurant, “at which time an (officer-involved shooting) occurred,” Ramirez said. “The suspect went down and was taken into custody.”

LAPD Sgt. Frank Preciado confirmed later from the crime scene that the suspect had died.

At least two stabbing victims were transported to local hospitals, Ramirez said, adding that the investigation was ongoing.

The area, which is often full of tourists, employees from nearby businesses and patrons of the Arclight Theater, was blocked off by police and emergency vehicles.