Why are Polish men in London getting military call-up papers? 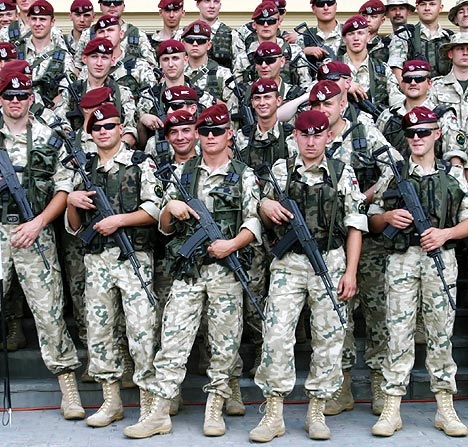 NEXT time you take a tray of tea and custard creams to the nice gang of Polish builders renovating your semi, they may seem a little distracted and anxious. Ask them why, and they will answer that some of them have in the last few weeks received call-up papers as army reservists.

This happened to a friend of mine in London at the end of last week.  At least 7,000 reservists have been recalled to the colours for immediate exercises lasting between 10 and 30 days.

They’re told by the Polish authorities that the call-ups are “routine”: but the men say they haven’t been asked before and they’re well aware of the growing alarm in Warsaw at President Putin’s aggression. Three weeks ago, their Prime Minister, Donald Tusk, called a press conference to warn that “the world stands on the brink of conflict, the consequences of which are not foreseen… Not everyone in Europe is aware of this situation.”

My own view is that Putin was initially more concerned with righting a specific historical wrong in Crimea than starting a new Cold War.  This is still probably the case despite the dawning truth that the EU/Nato Emperor really has no clothes at all.

But in the worst case scenario of a truly revanchist Russia, Poland certainly has the borders from hell.  Starting from the top, it abuts Kaliningrad (the Russian exclave on the Baltic carved at the end of the war from East Prussia), Lithuania, Belarus and Ukraine.

None of these borders relies on any natural barriers like rivers or mountain ranges – they are just lines on a map drawn by Stalin in the full flush of victory.  No wonder the Poles are feeling vulnerable.

And we should be worried, too. Poland is both a Nato and EU member.  We are bound by solemn treaty to defend her in case of attack.  Violation of Poland’s territorial integrity was after all why we went to war reluctantly in 1939.

Thanks to the marvellous 2012 film, The King’s Speech, we are well aware of the historical and personal drama behind King George VI’s radio address to his people on 3 September 1939 after the declaration of war against Germany. The King’s speech was couched in general terms – an appeal to international law and the Almighty.

But earlier that day the prime minister, Neville Chamberlain, had broadcast to the nation from Number 10 Downing Street in more specific terms that we should remember today: “This morning the British Ambassador in Berlin handed the German Government a final Note stating that, unless we heard from them by 11 o’clock that they were prepared at once to withdraw their troops from Poland, a state of war would exist between us.”

Listen to a recording, if you can.  Chamberlain’s pause at this point is heartbreaking.  He went on, his voice slightly lower, “I have to tell you now that no such undertaking has been received, and that consequently this country is at war with Germany.”

That we should defend Poland today seems to me reasonable.  I am still a reservist – until my 55th birthday in December.  If Russian tank columns attacked Warsaw, I would be prepared to do my bit – preferably manning a desk in the MoD, “flying a mahogany bomber” in the jargon, but if necessary, further forward.  (Hopefully, not in the winter, though luckily the silk-lined combat jacket that kept me warm in the Rhine Army and South Armagh a generation ago is somewhere in the attic.)

We are as a country still in a position to help defend Poland, if necessary.  The UK has tanks, armoured infantry and artillery based in Germany though they are due to be repatriated over the next few years.  General Lord Dannatt has suggested today that not only should we keep our garrisons on the north German Plain for the foreseeable future, but we should reinforce them. I cannot think of a better way to warn off President Putin from any further adventurism.  Perhaps David Cameron might consider reversing some of his defence cuts as well.

Poland is one thing but there are other states in Russia’s shadow who are members of both Nato and the EU. Would we fight for the vulnerable Baltic states should President Putin turn the screws on them?

They lie geographically from north to south in alphabetical order: Estonia, Latvia and Lithuania.  All have significant and often restive Russian minorities.  The populations of Estonia and Latvia are nearly a quarter ethnic Russian. The proportion in the eastern parts of Estonia is much higher.  Latvia’s capital, Riga, is nearly half Russian.  Lithuania is only five per cent Russian and as a result more aggressive towards them – a few days ago the government pulled the plug on a pro-Russian TV station.

In the case of Estonia, I feel a regimental, and therefore personal, connection.  A company of Estonians fought gallantly with the Welsh Guards in Afghanistan in 2009.  Three Estonian soldiers were killed in action, as were a number of Welsh Guardsmen, including Lieutenant-Colonel Rupert Thorneloe, the most senior officer to die since Colonel ‘H’ in the Falklands.

Welshmen feel a strong affinity for Estonians – a small and proud nation just like them that has had a difficult history, and with an acute sense of honour.  The British system chose not to give Thorneloe a medal even though many other officers whose lives were never at risk picked up gongs.  The Estonians, bless them, gave him posthumously their Distinguished Service Decoration.

But I fear they are going to have to work out their future with more Russian influence and pressure on their countries than they had anticipated. Both Nato and the EU have made promises they can’t possibly keep. We have led them up the garden path with our empty guarantees.