Russia is ‘planning invasion of part of Moldova’, warns NATO 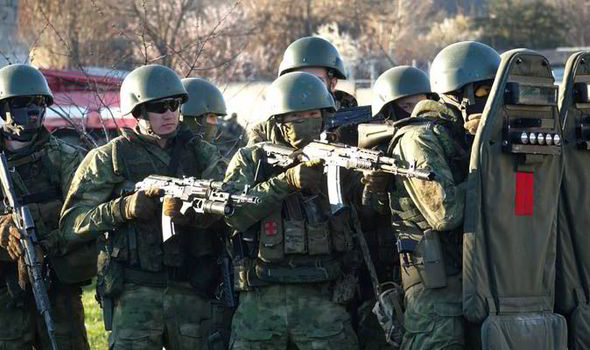 NATO’s top military commander in Europe said that President Vladimmir Putin’s large army – which he described as “very, very sizeable and very, very ready” could move west into the region at any moment.

Further regions in Ukraine could also be a target, he said.

Russia formally annexed the Ukrainian region of Crimea on Friday.

Supreme Allied Commander Europe US Air Force General Philip Breedlove pinpointed a breakaway region in Moldova called Transnistria as a possible target for invasion.Transnistria is an unrecognized but independent presidential republic with its own government.

Moscow has said that it has no intentions of a further land grab, and has denied claims that Russia is planning any invasions.

However, General Breedlove said: “There is absolutely sufficient (Russian) force postured on the eastern border of Ukraine to run to Transnistria if the decision was made to do that, and that is very worrisome.

“The (Russian) force that is at the Ukrainian border now to the east is very, very sizeable and very, very ready.”

Moscow already has around 1,300 soldiers in this self-declared state, over which Moldova has no control even though it owns the territory under international law.

President Barack Obama’s deputy national security adviser Tony Blinken has also accused Moscow of intimidating Kiev by massing troops on the border, and said: “It’s possible they are preparing to move in.”

He revealed the US is looking at offering military assistance to Ukraine but said:”It’s very unlikely to change Russia’s calculus and prevent an invasion.”

The development came as Crimea rebel leader Sergei Aksyonov issued a “call to fight” to ethnic Russians in Ukraine’s eastern and southern regions.

With fears escalating over the threat of the current Crimean crisis developing into a full-blown military conflict, Kiev foreign minister Andrii Deshchytsia said the prospects of war between his country and Russia “are growing”.

He said: “We don’t know what Putin has in his mind and what would be his decision. That’s why this situation is becoming even more explosive than it was a week ago.”

Kiev’s National Security and Defence Council chief Andriy Parubiy yesterday warned Putin’s intentions were “not Crimea, but all of Ukraine.”

He also claimed that pro-Moscow ‘extremists’ were now active in eight regions – including the strategic cities of Donetsk, Kharkiv and Odessa – and were “trying to seize regional administration buildings in order to repeat the Crimean scenario and give grounds for the deployment of Russian troops”.

Nine “separatist leaders” were arrested yesterday, according to Kiev.

Russian deputy defence minister Anatoly Antonov claimed there was no massing of troops on the Ukrainian border, and insisted Russia was observing international agreements on numbers.

However, Putin did not attend a nuclear security summit for world leaders at the Hague on Monday.

Ukraine yesterday demanded the release of Colonel Yuliy Mamchur, commander of the Belbek Air Force base near Sevastopol, after it was was stormed by Russian forces on Saturday.

Boxer turned politician Vitali Klitschko claimed Mamchur was being held by the Russian military in a jail in Sevastopol.

At least 189 military facilities in Crimea were flying Russian flags by last night, according to the Russian defence ministry.