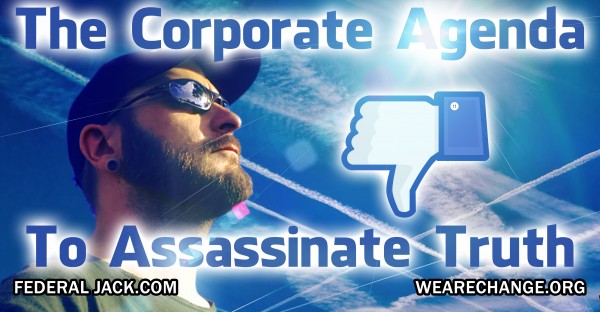 Luckily Popeye Federal Jack of federaljack.com had a back-up facebook page. He suffered an unwarranted battle with Mark Zuckerberg’s account death squad, having been accused of running a personal account using the name “Popeye,” which is allegedly not on an identification card issued by the state. After taking down his page, facebook demanded to see the name “Popeye Federal Jack,” in print, upon an identification card, which they of course knew did not exist. Having dealt with ID theft in the past, Popeye wisely refused to provide his personal information. Facebook has since blocked access to his account, unless he can provide them with his personal information and credentials. In Popeye’s defense, he did provide facebook with a legitimate press pass that included an actual photograph of his visage. This would confirm that he is an actual human being, alive on planet earth. In addition, he provided a link to his radio show “Down The Rabbit Hole” to prove his existence by producing recorded audio file evidence of his actual human voice. Facebook balked, and at the time of writing, has still refused to release and pardon his hostage account from execution. In order to document the fiasco, Popeye has captured screen shots of the exchange.

For someone as stalwart and unrelenting in the alternative media scene as Popeye, arguing for the right to be heard isn’t anything new, but this is a setback that will be hard to overcome. He had 1900 friends and had been operating the account since 2011 as a method of immediate and direct interaction with his listeners and fans. Even worse, Popeye will be losing his connection to hundreds of peers and constituents. He still has an active fan page on facebook, but the captive account, was what connected his vast catalog of important organizations and groups in the movement. Popeye is making a stand and he’s not going to give facebook, and its nsa/cia underpinnings more info than he has to!

Here’s a quick video reminder of the nefarious connections that helped to railroad the de facto social networking “service” into position, along with a visual breakdown of the ties that facebook unabashedly maintains:

So what was the trigger to cause all of this strife? Popeye claims that about four hours before his account was spirited away, he was involved in a hot debate regarding chemtrails in a comments section of another facebook user’s shared image. He was snitched upon and falsely reported by an individual on the thread as having a fake facebook page. Spiteful revenge from the other user involved in the debate was the motive for filing the false report against Popeye. Four hours later, Popeye’s main account gone. He will be contacting some friends to obtain screenshots of the particular discussion to provide as further evidence in his case. He assures folks that he wasn’t “flaming” anyone, but rather behaving in a decent and courteous fashion. This would be the sort of dialogue expected from anyone who has had an exchange with Popeye before. Whether in accordance or in disagreement, civility has been the mainstay.

This is an unfortunately reality and a major pain for anyone who has tried to play ball in an increasingly segregated and divided movement toward freedom. Not only are we under attack by the external over-arching power structure, but more often than not, the attacks from within seem even more commonplace. An ever expanding number of honest and self-funded individuals in the alternative media and truth-seeking scene are being singled out and unfairly bullied, if not outright deleted by the mega conglomerates. We have seen these for-profit monopolies develop a stranglehold on internet social media and online video sharing networks, often absorbing alternatives and quickly becoming the only option. As accounts and the associated contacts that have taken years to acquire are wiped clean, it becomes obvious that there is in fact a pattern to see here. There are countless folks who operate online under aliases, avatars and stage names. Why are these accounts not suspended and allowed to exist? Consider the fact that Bo and Sunny, two poodles owned by the current family occupying the White House in Washington, D. C., have an account. Were these two canines able to diplomatically appeal a rejection of their account as a fake through a well-lettered retort employing superior penmanship?

The hypocrisy and targeting couldn’t be any more obvious for one who has seen such underhanded methods to snuff accounts, fix view counters, and thwart those with spreading awareness with decency and humanity in mind. This is an attack on anyone involved in utilizing such digital avenues for the purpose of disseminating information and producing alternative media. Popeye is one of many, and each time freedom of speech is in jeopardy, or worse silenced, one who values such natural rights, should call out the perpetrators and speak loudly on behalf of the victim and share the story far and wide!