The Corporate Rape of the Great Lakes 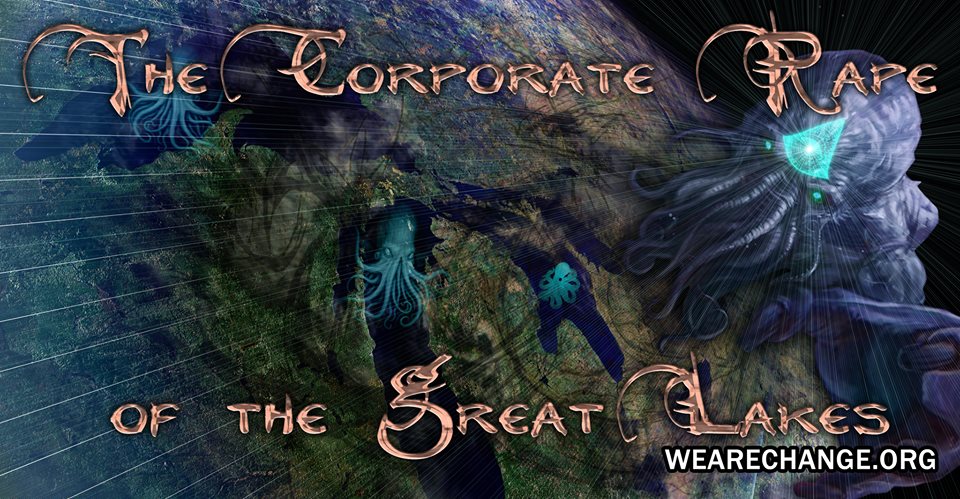 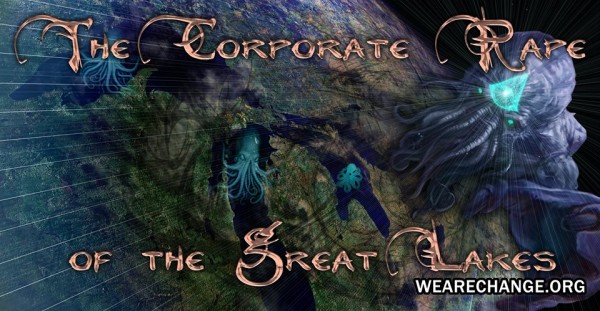 The Great Lakes, 5 bodies of water that collectively make up the largest body of freshwater on Earth, accounting for 1/5 of the planet’s freshwater; are currently being ravaged by corporate interest. As of 2006, a loophole in the Great Lakes Compact has allowed for private parties to exploit the Great Lakes for corporate profit. The corporation, Nestle, is leading the charge. Nestle is selling actual boatloads of Lake Michigan water to China for a profit of $500,000—$1.8 million per day. Although some have linked Obama to the exploitation, the Great Lakes Compact is ultimately a state agreement, not federal.

Former CEO Peter Brabeck-Letmathe has stated that access to water should be privatized and should not be a “fundamental right” because people have a sense of “entitlement” that makes them waste the water.

Their arrogance knows no bounds.

Nestle constantly damages the environment of the planet on a global level. Here is a list of all Nestle-owned products. But others are involved in pumping the Lakes dry, these include Ice Mountain, Perrier and Great Spring Waters of America.

It may seem intimidating to face off against the world’s largest food company, but it is already one of the biggest boycotted companies in the UK and there are plenty of alternatives that include reusable water bottles and sink filters to name a few.

The Great Lakes are being leeched at a rapid rate all while California is suffering one of the worst droughts in its entire history. California grows nearly half of this nation’s fruits and vegetables while exporting almost $20 billion in food production. The drought is so drastic that the Colorado River no longer reaches the Pacific Ocean. Although the Obama administration has promised about $1 billion dollars in aid to California, their promises are seldom kept.

The Palisades nuclear reactor on the coast of Lake Michigan was shut down after leaking nuclear waste into Lake Michigan 6 times in the past two years, with nuclear waste being emitted into the control room of the facility in one incident. The reactor is owned by the Entergy corporation, which has been accused of fraud and has been sued for $6.6 million for not maintaining its facilities as well as paying a $1.2 million dollar fine for a fire at their Indian Point nuclear facility.

Governor Rick Snyder of Michigan has a co-chair on the Council of Great Lakes Governors which is a council of governors from the states of Wisconsin, Illinois, Michigan, Ohio, Minnesota, and Indiana with the main goal being the preservation of the Great Lakes. Governor Snyder approved of a sulfide mine in Northern Michigan in November 2012, the mine being 200 feet away from Lake Superior. There has never been a sulfide mine that has not polluted the local water shed because the acid mine drainage poisons the local water system for 2,500 – 10,000 + years. So for Snyder to be part of a council claiming to protect the lakes while approving the sulfide mine appears hypocritical.

On March 25, 2014 British Petroleum (BP) spilled crude oil into Lake Michigan from its refinery in Whiting, Indiana. The company claimed a malfunction in a new distillation unit caused roughly 18 barrels of oil to spill into the lake. A day later, BP doubled its estimates to 39 barrels or approximately 1,600 gallons of oil. The United States Coast Guard completed their investigation into the oil spill on April 24th, ignoring BP’s violation of the Clean Water Act.

BP has a history of not paying its debts. The Deepwater Horizon oil rig exploded on April 20th, 2010 which resulted in the deaths of 11 workers and 206 million gallons of crude oil pouring into the Gulf of Mexico for 86 days, causing devastation to the environment as well as local fishermen who depend on the Gulf as their lifeline. The US National Oceanic and Atmospheric Administration (NOAA) in July of 2013 requested about $148 million from BP to fund “injury assessment and restoration planning activities”, which BP has declined to pay, claiming that the damage from the spill was “less than feared”.

BP also argued many of the settlements to the damages have been greatly exaggerated, although settlement records show that out of the 3,000 claims, only 20 have been paid. So if any damage has been done to Lake Michigan, chances are BP will avoid paying damages.

Many community-funded organizations are prepared to fight for and protect the Great Lakes. These individuals are upset with the Michigan Department of Environmental Quality (MDEC) for not adequately protecting and regulating use of the lakes, especially after the operation Nestlé and Ice Mountain have running in Mecosta, Michigan was blown wide open in late 2000.

One of the largest of the organizations is Michigan Citizens for Water Conservation, which has already squared off against Nestle and continues to actively engage them. You can donate or even join the organization to quicken the impact of this issue.

Another one of these organizations is Sum Of Us, which is an online-based activist hub with dozens of campaigns for various things including attacking Nestle’s privatization of water.

I was born and raised in the state of Michigan. I’ve grown up along the coasts of Lake Superior and Lake Michigan. I have always enjoyed, loved, and respected these magnificent and powerful bodies of water. To see them abused and exploited, has set me on a path of activism against unbridled corporate greed.

I simply hope to leave the world a better place than I found it.