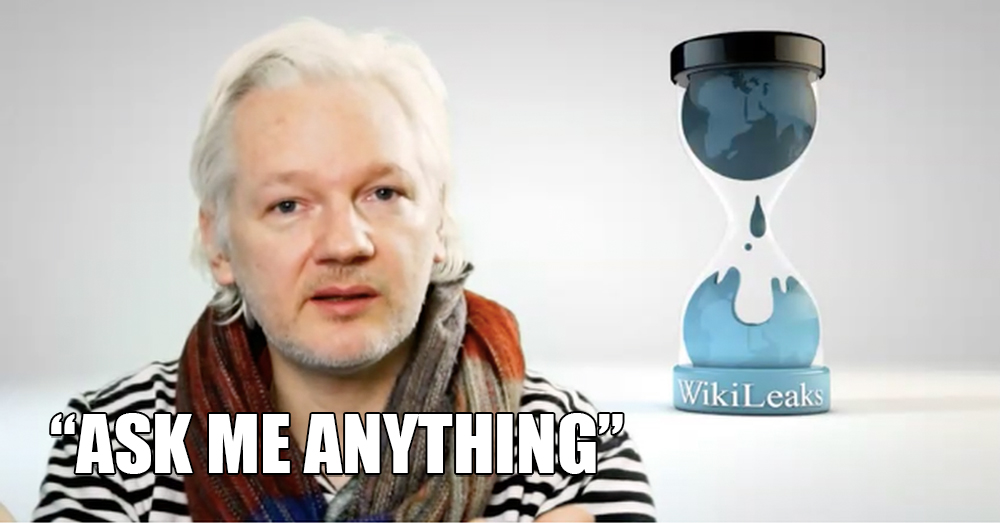 Countless bizarre conspiracy theories that Julian Assange was abducted for rendition by the CIA, or is dead, seem to have been finally laid to rest. 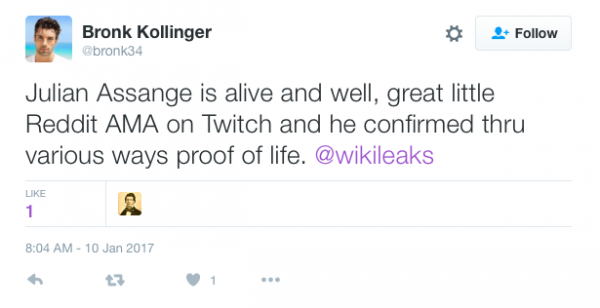 In a Reddit Ask-Me-Anything (AMA) on Wednesday, Assange appeared in live video on Twitch, where he answered questions from Reddit users. He also replied to some others via text.

The Assange-is-dead theory is not a new one. Questions as to his whereabouts have arisen periodically, ostensibly circulated by concerned fans. But the larger implications of it casting a shadow of doubt over the integrity of WikiLeaks’ operations is hard to ignore.

Meanwhile, Assange has in fact made several video appearances in recent months, and close friends and family members confirmed having met with him in person. 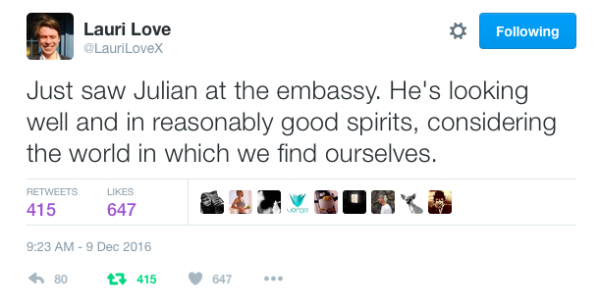 In a transcript of his AMA answers, Assange addressed exactly this, describing it as ‘social proof‘:

“…in relation to whether I’m alive or kidnapped. If you look at people like John Pilger, for example, long-term friend of mine, runs my defense fund, is a famously brave investigative reporter, my lawyers, close friends, people like Lauri Love, the Ecuadorian government. If you think about the number of people who would actually have to conspire and the amount of work that would have to be done to produce these false images is too many. That’s a social proof.” – Julian Assange

Yet seemingly no standard of proof is sufficient for the most ardent proof-of-life conspiracists, who even today made ridiculous assertions such as that the scarf Assange was wearing was a CGI depiction.

The conspiracy theories being circulated have been described as ‘black propaganda’ designed to undermine the organisation and distract from its work.

WikiLeaks supporters have been equally frustrated by the outlandish theories. 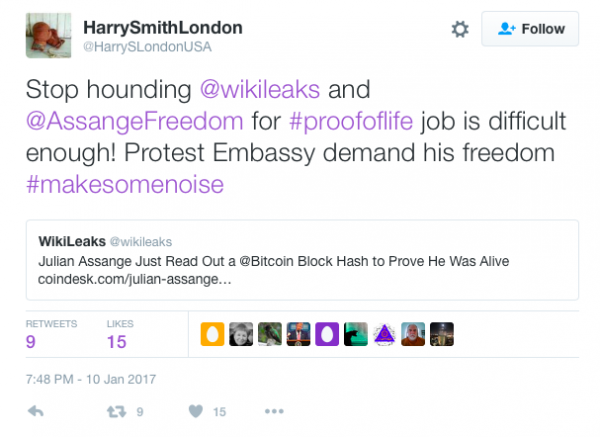 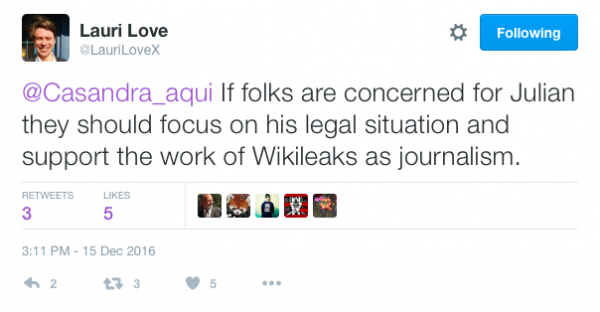 Here lies the crux of the issue: what Assange is actually being put through always seems to fall by the wayside for the proof-of-lifers who claim to be concerned for him. 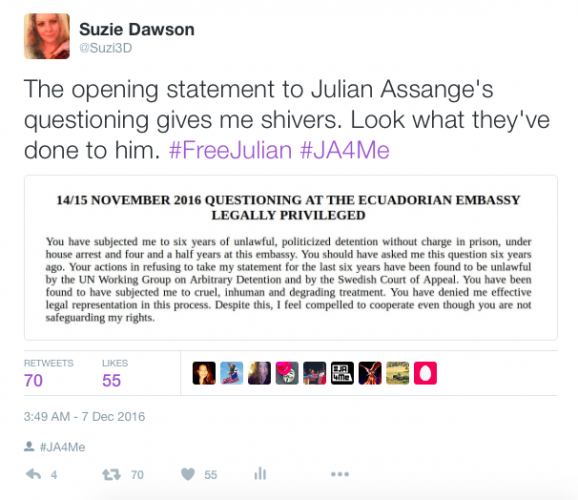 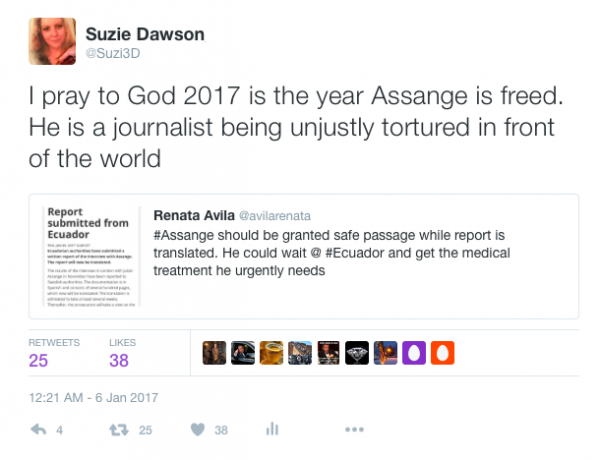 For this is the world we live in: one where the world’s most accomplished publisher can be subjected to, as the United Nations Working Group on Arbitrary Detention ruled, “cruel, inhuman and degrading treatment” and all we are supposed to do is sit around on Reddit arguing about whether he is dead or not.

While our heroes suffer in public, the provably corrupt are holding lavish dinner parties, unimpeded. 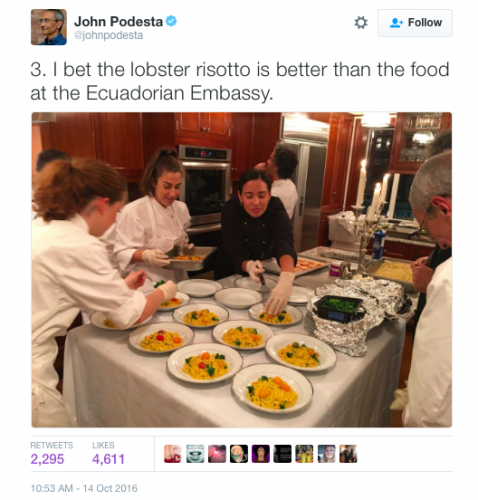 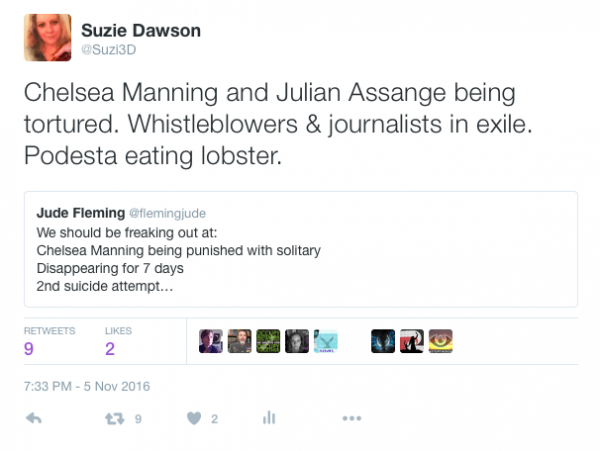 Reddit is, of course, the famous progeny of another revered figure – The Internet’s Own Boy, Aaron Swartz. While vast swathes of the conjecture that abounds there, particularly since its corporate buy-out, both bore and exasperate, if not outright obfuscate, there is still a few gems:

All jokes aside, Assange is alive, still has refuge, is still working, contributing and surviving to fight another day.

This is one instance where I’m really pleased to be able to say: “I told you so!”