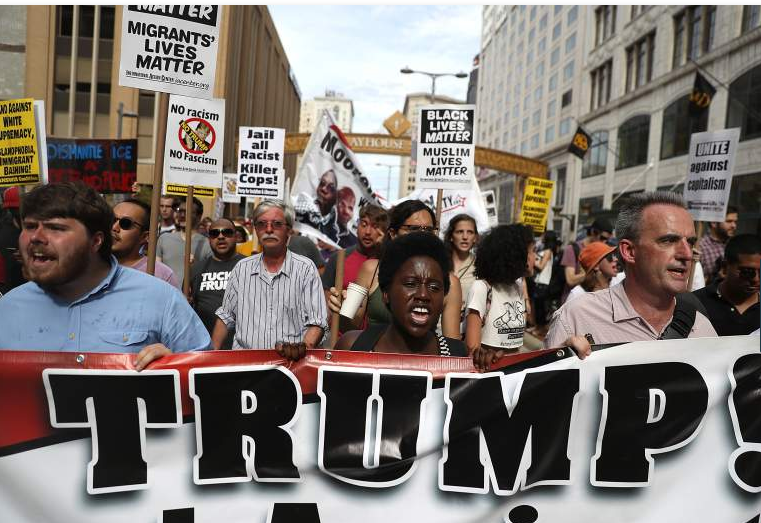 A protest erupted at the Republican National Convention yesterday in opposition to Republican nominee Donald Trump.

A small group of delegates at the RNC spoke about their opposition to Donald Trump being the nominee prior to the convention starting.

Delegates tried and failed demanding a roll call vote on the final rules package when they tried to propose a petition that needed majority of 9 state delegations in a last ditch effort to de-rail.

The situation lasted a few hours but was then later defused by party leaders persuading three states to withdraw their support.

The crowd then broke out in chants of “We want Trump!”

It’s interesting to note that an RNC senior official previously said to CNBC:

“We choose the candidate not the American people. The media has created the perception that the voters will decide the nomination.” ~Curly Haugland

The insane thought that the American people have no say over a political party that millions voted for may explain why Trump chose Mike Pence as his Vice President – to avoid any backroom deals to replace Trump with Ted Cruz.

Meanwhile, outside the convention center other protests erupted displaying both support and critiques of Donald Trump.

“Shut it down!” screamed some protestors, jumping the stone barrier walls setup as a security measure for the convention.

As marchers reached the security checkpoint gate, cops surrounded them on bicycles.

Only one arrest has been reported thus far of a man who allegedly grabbed a state troopers gas mask on Sunday.

Elsewhere in Cleveland, another protest took place where hundreds of women bared it all, naked in opposition of Donald Trump and the GOP. The project was done according to it’s website to fight repressive rhetoric against women and minorities within the Republican Party. Women posed naked holding a mirror symbolic of reflection.

“We hope to suggest that women are a reflection and embodiment of nature, the sun, the sky and the land. Republicans, Democrats and all other political parties … to take part reflecting their anger through art against the hateful repressive rhetoric of many in the Republican Party towards women and minorities.”

We will keep you up to date about the RNC and protests that ensue because of the event. Stay tuned to We Are Change.