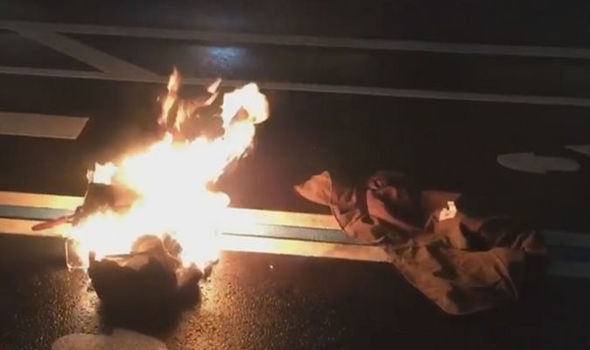 An anti-Trump snowflake has been taken to the hospital after attempting to light himself on fire outside Trump International Hotel in Washington, DC. Surprisingly, he did not melt.

While the name of the individual has not been released, he stated that he is from California.

The incident occurred just before 9:30pm, and the fire was reportedly put out by the man himself after hotel employees called the police and DC Fire.

Fire dept puts out fire where man self immolation in front of Trump Hotel DC. He put fire out himself before walking to police. pic.twitter.com/10g5SKXiUJ

The man told a reporter on the scene that it was an act of protest against president-elect Donald Trump.

“I was trying to light myself on fire as an act of protest,” the man told NBC4. “To protest the fact that we’re electing somebody who’s completely incapable of respecting the Constitution of the United States.”

The man was rushed to the hospital to be treated for burns, but the injuries are not believed to be serious. There was no damage to the hotel immediately reported.

Self-immolation is a centuries-old form of protest in which the person kills themselves as a political martyr. It is unclear if the man was actually planning to go that far, or if he had any real plan at all.

Earlier in the day, protesters repeatedly blocked traffic for a two-hour long march to the hotel from McPherson Square. The demonstrators repeatedly demanded that Trump’s presidency is illegitimate, because he wasn’t their candidate of choice.

It is likely that there will be plenty more hilarious shenanigans as protesters flood into DC. Multiple groups have vowed to attempt to shut down the inauguration completely, even plotting to attempt to stop the DC Metro public transportation lines.

Hey Lauren Windsor of @_under_current will you disavow plans by @DisruptJ20 about using chains to stop metro trains? pic.twitter.com/Dt1b6UjNG2

Thousands of Bikers for Trump are also expected to also arrive in DC to act as a buffer between attendees and protesters.

We Are Change will be reporting live from the protests as well as the inauguration. Stay tuned.