Protests Banned, Internet Shut Down Across India After All Hell Breaks Loose 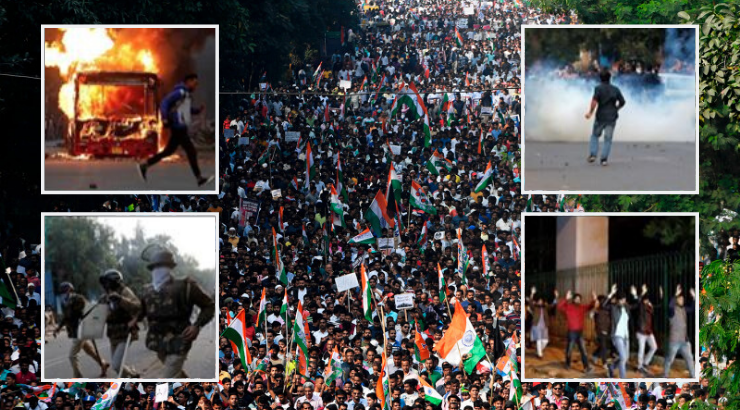 Tens of thousands of people in at least 15 cities across India Thursday defied a government ban on protests after violent demonstrations last week sent the country into chaos following the passage of the Citizenship Amendment Act (CAA), reported Bloomberg.

CAA is a measure that the Modi government passed into law last Wednesday that allows amnesty to only non-Muslim illegal immigrants from Pakistan, Bangladesh, and Afghanistan. The result of the controversial new citizenship law considered by many to be discriminatory against Muslims led to violent protest late last week and through the weekend.

Christians, Buddhists, Sikhs, Jains, and Parsis from the three eligible countries can now receive citizenship if they have illegally entered India though Muslims from the same countries cannot.

The protest ban is a police order that prohibits more than four people from assembling. Still, tens of thousands of people ignored the government’s call to stand down and have been demonstrating this week, especially in regions of Bangalore, Hyderabad, Patna, Chandigarh, and Delhi.

Hundreds of people have been arrested in parts of India as authorities impose internet blackouts in an effort to end mass protests against a controversial citizenship law that has rocked the country for the past week https://t.co/Q9FQakzWxl pic.twitter.com/OVxLTyotqO

Telecom companies and internet service providers in high protest regions shut down data service this week, likely on government orders, to squash coordination efforts of organizers who were responsible for assembling thousands of people into the streets via social media.

Protests against controversial citizenship law in India If minorities and states cannot get citizenship, let freedom be one nation cannot bear another nation's right to live is the right of all.#IndianStatesWantFreedom @majorgauravarya @narendramodi #CitizenshipAmendmentAct pic.twitter.com/7l1JBMS6sT

7 trains have been torched in Bengal causing a loss of about 50 crores.

Traitors & infiltrators causing loss of life & property must be shot at Sight.

IAS deserter @naukarshah who is one of the instigators of the so called protests must be brought to justice by @NIA_India pic.twitter.com/iCVw0tUKKJ

Indian markets have ignored the social unrest as equities hit record highs for a third straight day. Sovereign bond yields have inched lower since the start of the uprising, while the rupee was calm.

Bloomberg notes that CAA “is seen as a precursor to the government’s plan to implement nationwide citizens register to weed out illegal migrants.”

“Our paranoid rulers in Delhi are fearful. Our Home Minister would not dare allow a peaceful protest,” Modi critic Ramachandra Guha said after police detained him at a protest in Bangalore. “Everyone should stand up; the entrepreneurs of Bangalore should stand up. Do they want this image to go around, that we are a quasi-dictatorship? We are here to assert our democratic rights.”

With the Indian economy quickly decelerating – the passage of CAA triggering social unrest can now allow the Modi government to scapegoat protesters as the reason why the economy is faltering.

Saxo Bank’s Christopher Dembik, global head of macro research, provides some color on the slowdown that is expected to roll well into 2020. Dembik warns: “All the leading indicators point out it will get worse.”

India’s slowdown has certainly been the most under-appreciated aspect of the current global downturn. In Q3 this year, the Indian economy reached a 6-year low at 4.5% YoY, down from 5% in the previous quarter. All the leading indicators point out it will get worse. pic.twitter.com/sGajxI9Q4u