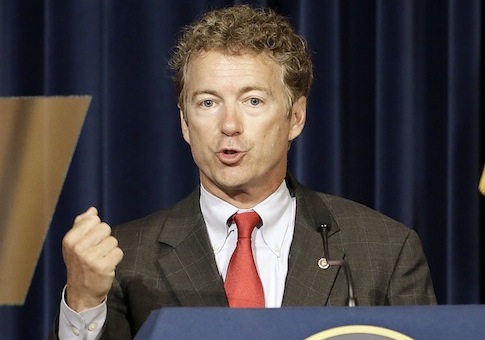 The new darling of the Democratic Party, Senator John McCain, has accused Senator Rand Paul of “working for Vladimir Putin” after the Kentucky politician blocked consideration of a treaty to allow Montenegro into the United Nations.

“If there’s objection, you are achieving the objectives of Vladimir Putin,” McCain said when he attempted to call the treaty into consideration. “If they object, they are now carrying out the desires and ambitions of Vladimir Putin, and I do not say that lightly.”

Paul appeared, stating “I object,” then hurrying out of the room without providing any further commentary.

“That is really remarkable that a senator, blocking a treaty that is supported by the overwhelming number, perhaps 98 at least of his colleagues, would come to the floor and object, and walk away,” McCain said. “The only conclusion you can draw when he walks away is he has no argument to be made,” he said.

McCain then resorted to the same tactic that he and his pals in the Democratic Party have been using against anyone who challenges them — declaring that the senator is working for Putin.

“The senator from Kentucky is now working for Vladimir Putin,” McCain said.

Doug Stafford, Paul’s chief strategist, has responded to the allegation by tweeting out “see you in court” — in Russian.

The statement was a clear violation of Rule 19, the same rule that was used to infamously shut down Senator Elizabeth Warren — causing her to be censured.

The rule clearly states that senators may not “directly or indirectly, by any form of words impute to another Senator or to other Senators any conduct or motive unworthy or unbecoming a Senator.”

In a statement provided to We Are Change, Paul asserted that, “currently, the United States has troops in dozens of countries and is actively fighting in Iraq, Syria, Libya, and Yemen (with the occasional drone strike in Pakistan).”

“In addition, the United States is pledged to defend 28 countries in NATO. It is unwise to expand the monetary and military obligations of the United States given the burden of our $20 trillion debt,” Paul’s statement concluded.