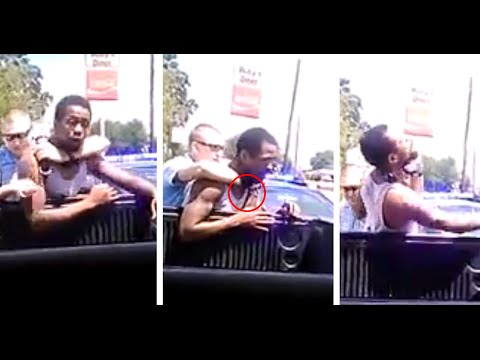 VILLA RICA, GA — We have received an alarming video showing an innocent citizen being tased, choked, punched in the ribs, kneed, yanked down to the ground and beaten by a cop.

The way that this citizen demonstrated composure in the beginning of the video is remarkable.

The officer, who’s name has not yet been released, can be seen behind the citizen slugging him and kneeing him, but refusing to tell the citizen what he did wrong.

The way the officer acts is almost like a small child throwing a tantrum, raging on an grown man from behind.

The officer evidently was trying to do Muay Thai knees on Marcus while choking him.

He also appears to use his handcuffs as a weapon, jabbing the metal into Marcus’s ribs or back area.

Marcus appears to sees witnesses across the way and thanks them for observing, but as he tries to give them his name and contact information the officer strikes him in the face.

Another officer then arrives and tases Marcus from behind, forcing him to the ground.

The citizen reports the following:

I was pulled over by Georgia state troopers on Friday for allegedly not wearing a seatbelt, when the officer approached my vehicle I informed him I was, as did my passenger. We gave him our information, he checked out our stories and proceeded back to my truck, right after he took off his hat, cellphone, and glasses.

He asked me to step out of the vehicle, I complied. Without warning he grabbed me, tried to throw a punch that a dodged. I instructed my passenger to pull out his cell phone and record.

I asked “was I under arrest?”

He replied, “you’re driving under a suspended license!” while trying to throw me to the ground.

He pulled me to the back of the truck and began to hit me, knee me, and kick me, he used his handcuffs and a choke hold as a weapon — I never threatened the officer in anyway nor did I try to escape or flee.

After about a minute his supervisor arrived, without assessing the situation or giving me warning, he pulled out his taser and fired. I lost consciousness only to regain it with me still being tased and beaten.

Upon arriving at the jail, the doctor on the shift instructed the officers that they would not book me in without me receiving immediate medical attention. I was transported to the hospital, only to have the officer who had just beaten me moments before, to continually interfere with the nurses taken pictures and documenting my injuries.

After my X-Rays and treatment, I was turned over to the custody of Carroll County Jail.

Please show Marcus your support and let’s make sure these officers are held accountable for what they did.