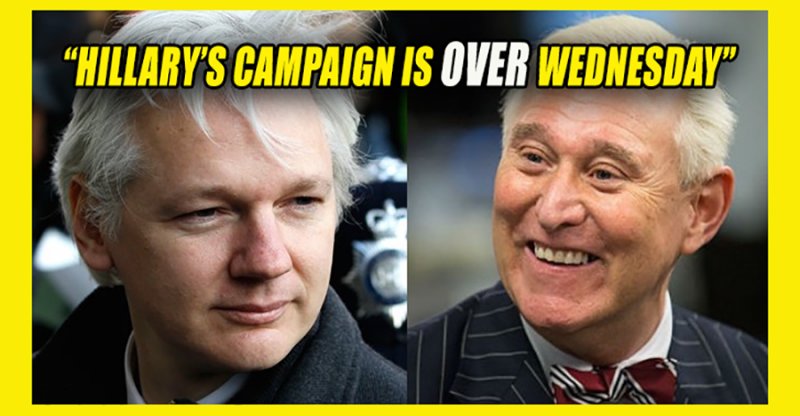 Wikileaks and Julian Assange himself has promised a leak that will change this election cycle, but have yet to leak the documents the organization promises will turn the tide for the Democratic party’s candidate Hillary Clinton. Friend of Julian Assange and Donald Trump, Roger Stone has previously additionally confirmed that an October surprise is coming from Wikileaks. Now Rep. Nadler has questioned FBI Director Comey about Stone’s ties to the international whistle-blower organization and whether Stone himself has been questioned about what he knows of the hacked data.

Comey gave his usual response when questioned by Rep. Nadler, about an ongoing investigation Nader asked Comey if he had questioned Stone about his remarks about an October surprise in the works by Wikileaks.

“Mr. Stone made these statements during a Republican campaign event while answering a question about a potential ‘October surprise.’”

Comey responded “I can’t comment on that.” Then when further pressed by Rep. Nadler,  “Because it’s an ongoing investigation?” Comey said “I don’t want to confirm whether there is or is not an investigation. “The video of the senate hearing  is view-able at mediamatters.com a full transcript is below of the conversation between Rep. Nadler and FBI Director James Comey.

Wikileaks has yet to release any data implicating Hillary Clinton in any criminal intent/conduct despite numerous interviews promising a release is an October surprise coming this month for Hillary Clinton?

REP. JERROLD NADLER (D-NY): Let me talk about a case that may pose a current national security threat to the United States and ask you a few questions about that. In his earlier remarks, Mr. [John] Conyers [D-MI] referenced an August 30 letter from the ranking members of a number of House committees. That letter asked whether the FBI was investigating troubling connections between Trump campaign officials and Russian interests and whether they contributed to the illegal hacking of the Democratic National Committee and the Democratic National Campaign Committee. You’re familiar with that letter, I take it?

NADLER: I’d like to ask you a few questions. The letter said this and I quote. “On August 8, 2016, Roger Stone, a Donald Trump confidant, revealed that he has communicated with WikiLeaks founder Julian Assange about the upcoming release of additional illegally hacked Democratic documents. Mr. Stone made these statements during a Republican campaign event while answering a question about a potential ‘October surprise.’”

Obviously if someone is stating publicly that he is in direct communication with the organization that obtained these illegally hacked documents, I assume the FBI would want to talk to that person. Has the FBI interviewed Roger Stone about his communications with Julian Assange or his knowledge of how WikiLeaks got these illegally obtained documents?

NADLER: Mr. Stone stated that he has knowledge about upcoming leaks of additional illegally hacked documents. Has the FBI asked him about those communications?

NADLER: Because it’s an ongoing investigation?

COMEY: I don’t want to confirm whether there is or is not an investigation.