VIDEO: What Americans Need To Realize About The 2016 Election 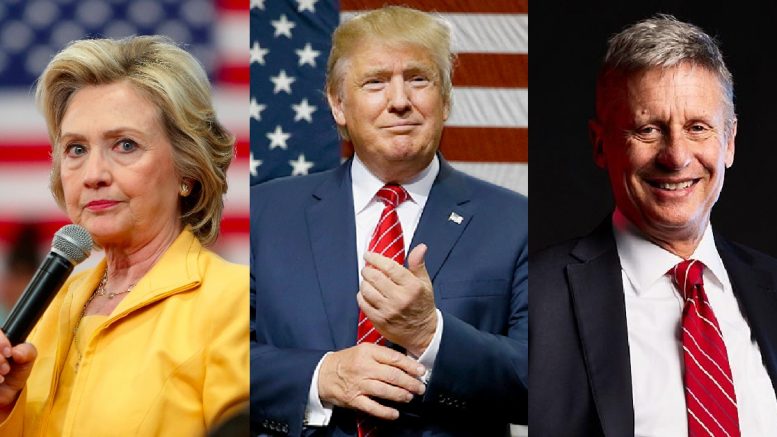 If you’re ready for the 2016 Election to be over, you’re not alone… I have a few things I would like to say to the presidential candidates who have made headlines recently.

Hillary Clinton, do you realize how many of your supporters are in your camp solely because of the fact that they want a woman to be president? Hell, I want a woman to be president, but not you, and not the way you have gotten yourself this far. You have lied, cheated and manipulated your way to the top. You have taken every bad quality a woman can have, and you have exemplified it in order to get where you are today. In fact, you make Americans feel like they are flipping back and forth between never-ending episodes of House of Cards and How To Get Away With Murder. You got away with refusing to do your job and letting Americans die in Benghazi. You got away with jeopardizing classified information on your private email server. And you even got away with the DNC rigging the primary election. Are those things to be proud of, really? You say that you want to be a role model for women, but at the end of the day, if you actually do win this election, the only people you are a role model for are the liars, cheaters and manipulators just like you!
[WATCH: How The Democratic Party Nominated Its First Woman For President]
Gary Johnson, congratulations, you may not have made it to the first presidential debate, BUT you have done one important thing that makes you equal with the other candidates in the running. You are not a true representation of your party. Trump is an authoritarian posing as the Republican nominee, Clinton is a neocon posing as the Democratic nominee, and quite frankly, you are a liberal posing as the Libertarian nominee. You say that you’re socially liberal and fiscally conservative, but you’re not a true Libertarian. You don’t advocate for making government smaller and the advancement of Liberty. You’ve said you support the Trans Pacific Partnership, you’ve said you support some gun control. You have said that the government should be allowed to force a private cake company to bake a cake for an event they are against. It’s not just about your Aleppo moments, it’s about the fact that 2016 is the year when a Third Party candidate is more popular than ever before, yet here you are, ruining that newfound popularity by turning against the party that nominated you, and by saying that Hillary Clinton is a “wonderful public servant.”
[WATCH: Major Political Shift, End Of The Libertarian Party]
Donald Trump, you had the opportunity to call out Hillary Clinton for all of the horrible things she has done, on national television, with her in the same room. Do you know how many people would kill for that opportunity? And yet, the debate performance you gave, raises the question: do you actually want to be the next president? When you stand on that stage, and you talk about all of the things you and Clinton have in common, such as raising the minimum wage and keeping individuals on the no-fly list from buying guns,  you are alienating a large number of Republican and Independent voters who would never vote for Clinton, and who were already cringing at the fact that they might end up voting for you. Seriously, if you actually want to be elected, then when it comes to the next debate, get your facts straight, don’t point out all of your policies that sound identical to your opponent, and please stop making Americans feel like we are watching a never-ending Saturday Night Live skit.
[WATCH: The most Embarrassing and Lowest Point of Obama’s Presidency JUST HAPPENED]
Look, I honestly don’t know if it’s possible to have a “perfect” presidential candidate. But that’s okay, because even with the choices we have in 2016, it’s important to remember that Congress also has power. In fact, just last week, Congress reminded us of that power when they overrode Obama’s veto for the first time. Congress even has the power to veto any of the president’s executive orders. In this crazy, ridiculous election year that is 2016, it’s important to remember that the president is not an all-powerful being, and we should also be paying attention to the people who actually do make the laws.
Follow Rachel Blevins on Facebook and Twitter.