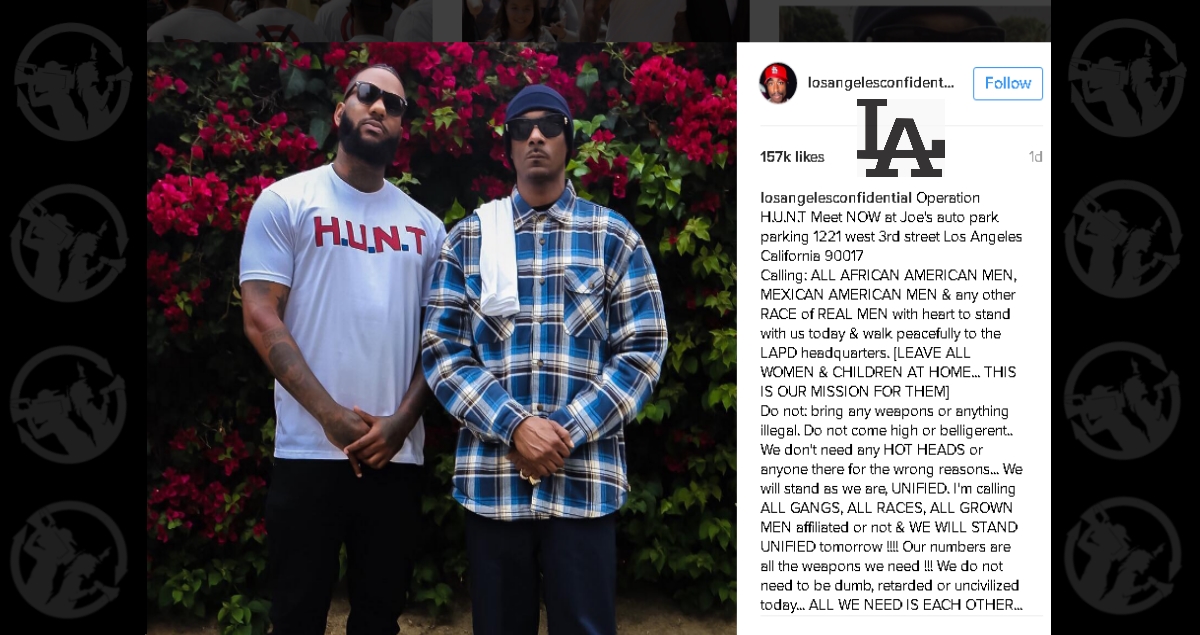 “You’ve got to match hate with love”: Snoop Dogg

Rappers and Los Angeles-area natives the Game and Snoop Dogg led a unification march for men of  every color Friday morning to the LAPD’s graduation of its newest officers, hours after five Dallas police officers were shot and killed and seven others were wounded during a sniper attack.

About 6:30 a.m., the Game posted on his Instagram account a call for black, Mexican and men of all races to march to the Los Angeles Police Department’s headquarters to “make the Californian government & it’s law branches aware that from today forward, we will be UNIFIED as minorities & we will no longer allow them to hunt us or be hunted by us !!!”

He said women and children should stay away, “THIS IS OUR MISSION FOR THEM,” he wrote.

The Game, a Compton native whose legal name is Jayceon Terrell Taylor, said in his announcement the march had to be peaceful.

“Do not: bring any weapons or anything illegal. Do not come high or belligerent … We don’t need any HOT HEADS or anyone there for the wrong reasons… We will stand as we are, UNIFIED. I’m calling ALL GANGS, ALL RACES, ALL GROWN MEN affiliated or not & we will stand UNIFIED.”

Snoop Dogg, whose real name is Calvin Broadus, said organizers didn’t know there was an LAPD recruit graduation scheduled for Friday morning. The point of the march was to reintroduce the Police Department to members of the community it serves, he told reporters at the scene.

About 50 men joined the march to LAPD headquarters.

The group began planning the march before dawn, the Game said. Organizers spoke with marchers about their unifying, peaceful message so it couldn’t be misconstrued by police, and conversely, so they would listen when law enforcement responded.

“We don’t have to fear each other today,” he said.

The march came amid a growing discussion about law enforcement’s relationship with minorities and was preceded by three days of bloodshed.

On Tuesday, Alton Sterling was shot by police in Baton Rouge, La., and cellphone video of the incident went viral. On Wednesday night, Philando Castile was shot in Falcon Heights, Minn. His death was live-streamed on Facebook and also went viral.

Together, the shootings refocused the nation on fatal use of force by law enforcement officers, particularly against people of color. A cellphone video of an unarmed, white 19-year-old man being shot by police in Fresno has also gained media attention.

By Thursday night, protests —  many involving the group Black Lives Matter — had sprouted up in major cities across the country. In Dallas, about 800 people were peacefully marching through the city’s downtown, flanked by about 100 police officers, when shooting broke out. The shooter, or possibly shooters, targeted police officers and hit 12, five of them fatally.

The Game said Friday morning that he was leading the march as a leader of his community and as a human being.

Richard Noveles, 29, of Norwalk marched with the group and said that he rejected violence as the answer.

“America needs to wake up and realize where this is going. This thing is escalating, and at the end of the day, it ain’t going to be safe for me or safe for you,” Noveles said. “Everyone is thinking they are safe behind their keyboards and that a hashtag means something. But a hashtag or a keyboard aren’t going to save you once it goes that route and gets violent.”

Snoop Dogg also had this message for the new LAPD officers: “Respect is key.”

“Think about the person you’re pulling over and their family. Because that way, you’ll have more of a consideration of life and de-escalate as opposed to escalate,” he said.

After the graduation ceremony ended and the LAPD’s newest officers threw their hats in the air and hugged, police led a handful of marchers into the department’s glass headquarters. Snoop Dogg and the Game were led to a small room where they and others had a private meeting with L.A. Mayor Eric Garcetti, Police Chief Charlie Beck and other top police officials.

It was an impromptu decision. Organizers of the march, which included the Nation of Islam, said they didn’t expect to meet with the chief and mayor.

The group emerged 45 minutes later, after what Garcetti described as an “extraordinarily powerful meeting.” It was another surreal scene: the mayor and police chief of Los Angeles addressing reporters, flanked by famous rappers.

They spoke of the rage they felt this week, seeing videos of police shootings in Baton Rouge and Minnesota, learning that police officers were killed by a sniper in Dallas. They found common ground in that anger, said Beck, whose eyes filled with tears as he spoke.

“We are all furious about what has happened to this conversation – that there is no dialogue, that is it becoming a screaming contest from opposite sides of the room,” the chief continued. “It can’t be that. The way to solve problems is to sit down, to look them in the eye and work it out.”

The Game said he felt restless after the two police shootings of black men that drew national attention this week. He struggled with how to answer his son’s questions the police. He couldn’t sleep. He was sad, he said, and angry.

When news of the shooting in Dallas broke, the rapper said, he thought of the families of the officers who were killed.

“I took those police uniforms off of those police officers that met an untimely demise last night and I turned them into what they really are before they put them on,” he said. “And those are human beings, like me and everyone standing here.”

After the meeting, protesters headed back to where they had begun their march near West 3rd and South Beaudry streets. Barry Henderson said it was an important day in police-community relations in L.A.

“All these years and we never took it straight to the police and said, ‘This has to stop,’ ” said Henderson of Marina del Rey. “These people are not taking this no more.”

Music mogul Russell Simmons was on hand, congratulating Snoop and others. He then went in to LAPD headquarters to meet with police officials.

Danny F. Quest is a official 9/11 Truther, anti-war activist, humanitarian, Blogger, and writer/contributer for WeareChange.org Follow him on Social Media.