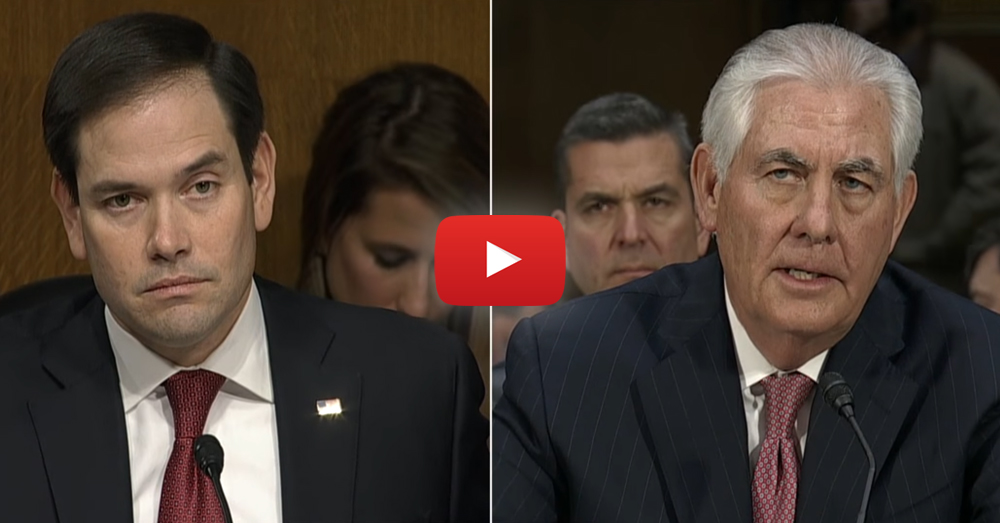 Rex Tillerson refused to condemn Saudi Arabia for its blatant human rights violations during his Secetary of State confirmation hearing on Thursday. Instead, he said, “I would need greater information to make a true determination of that,” and that he would rather seek diplomatic relations to further a change.

“I am sure you’re also aware of the lack of both religious freedoms and lack of rights of women in Saudi Arabia,” Rubio said. “In your opinion, is Saudi Arabia a human rights violator?”

Tillerson responded, “As Saudi Arabia certainly does not share the same values of America, however, American interests have been advocating in Saudi Arabia for some time and I think the question is what is the pace of progress that should be expected for the kingdom of Saudi Arabia to advance rights to women and others in the country?”

Rubio then asked, “But as it currently stands, do you consider what they are doing to be human rights violations?”

Tillerson replied with “I would need to have greater information, Senator, in order to make a true determination of that.”

Rubio then asked Tillerson if he is familiar with the common practices of beheading and lashing citizens, and degrading women in Saudi Arabia.

“Yes, Senator, I am familiar with all of that,” Tillerson answered.

“So then what more information would you need?,” Rubio asked.

Tillerson responded, “In terms of when you designate or label someone is that the most effective way to continue to have progress made in Saudi Arabia or any other country.”

“So my interest is the same as yours, our interest are not different senator there seems to be some misunderstanding that somehow I see the world through a different lens and I do not I share all the same values as you share and want the same things for people in terms of freedoms,” Tillerson said. “But I am also clear-eyed and realistic about dealing with cultures these are century long cultures of culture differences it doesn’t mean that we can affect them to change.”

Tillerson said that he believes Saudi Arabia is making gradual progress in the direction that would be favorable to the U.S.

“What I do believe is it’s moving in the direction we want it to move,” Tillerson said. “What I wouldn’t want to do is to take some kind of precipitous action that suddenly causes the leadership in the kingdom of Saudi Arabia to interrupt that.”

Many are questioning whether Tillerson’s ties to Saudi Arabia through his former employer Exxon are motivating his comments. However, Tillson left Exxon following his nomination as the next Secretary of State, and he received an $180 Million retirement payout from the company.

Because of this, it is assumed that Tillerson can no longer profit from oil deals with Saudi Arabia in the same way that Hillary Clinton profited through the Clinton Foundation when she was secretary of state.

While Tillerson claimed that things are improving, and human rights violations are declining in Saudi Arabia, the numbers don’t agree. 153 people were executed in 2016.

Saudi Arabia also carried out at least 158 death sentences in 2015, according to Amnesty International who called Saudi Arabia’s executions “unprecedented.” That’s only a mere five less than last year, which has been reported by Human Rights Watch as the largest since the 1980s.

However, on other issues Saudi Arabia has improved slightly. It’s worth noting that the kingdom is currently deliberating allowing women to drive. Prince Alwaleed bin Talal has been very adamant saying “it’s time for women to drive,” in a press release from November. Although he holds no government power his voice on the issue is sure to help the effort.

While there are some things changing in the kingdom of Saudi Arabia, the most extreme things are still the same, and need to have heavy reform. For example,  journalists/bloggers should not be lashed for allegedly “insulting Islam,” and a disabled man should not be beheaded for protesting the government. Saudi Arabia still has a ways to go before it allows free speech.

Time for women to drivehttps://t.co/6KAniFa4BT

Additionally, King Abdullah, in 2013 named some women to the Shura Council in his government, which advises the cabinet. Abdullah also announced that women could for the first time vote and run in municipal elections to hold office.

Compared to the U.S., here is a list of 16 crimes that can result in execution in Saudi Arabia: