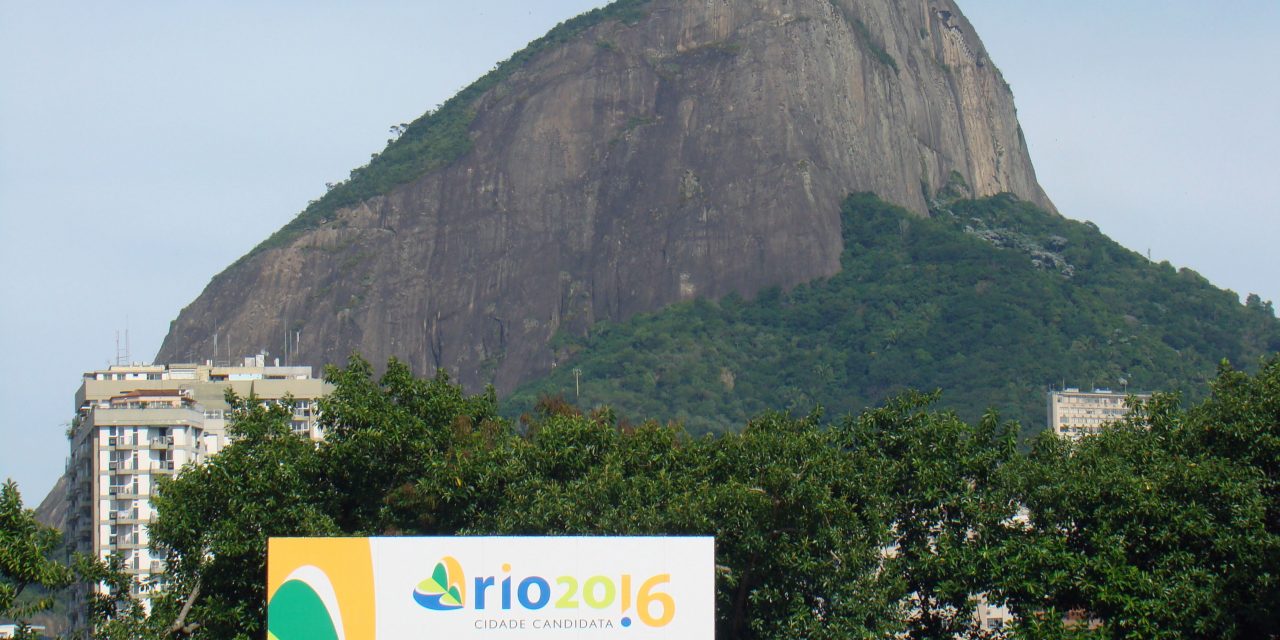 In the 1950s and 60s, Rio’s most prominent artists were international stars, which made the popularity of “Bossa Nova” the perfect opportunity for Brazilians to share their culture and approach to life with the world. But throughout the following decades, Brazil changed considerably in the eyes of foreigners. It became the land of corruption, misery, police brutality, and a savage drug war, which was partially responsible for over 60,000 homicide cases in 2014, alone.

But as athletes from all corners of the globe compete in the Olympic spirit, news outlets forget about the country’s problems.

Here’s a rundown of the five most concerning issues facing tourists, athletes, and Brazilians themselves during this year’s leading international sporting event.

1. In Brazil, political protesters are granted very little freedom of speech (that’s why they are threatening to extinguish the Olympic torch)

On May 10, 2016, disgraced then-president Dilma Rousseff signed a bill into law that prohibits individuals from holding political protests in publicly-owned stadiums — where all Olympic games are currently being held. While some protesters claim this policy was designed by the interim president, former Vice President Michel Temer, the law is actually a product of Dilma’s time in office. Citing Article 28 from Law 13.284, police officers are now asking protesters to either leave the stadiums or destroy any material they are using to protest politicians while watching the games.

Recently, Al Jazeera reported on a group of protesters threatening to blow out the Olympic torch. They are protesting the cost of the games, among many other issues.

A man whose unsuccessfully attempted to extinguish the torch claimed he did so because he is “against the current president, and the ‘coup.’”  But according to a group of torch-blowing protesters who used Facebook to organize their events, the idea behind the “prank” is not only focused on Temer. The protesters intend to “show Brazil and the world that we are unhappy with the current political and economic situation in the country, where WE do not want these OLYMPICS. [sic]”

2. Rio is broke and so is Brazil

The state of Rio de Janeiro is expected to have a deficit of BR$19 billion by the end of the year, a projection that prompted the Olympics’ host government to issue an emergency state “decree” in June — nearly two months before the event — publicizing “the abnormal situation” in an official manner. In April of this year, the state had already reported its public deficit equaled 201% of its annual revenue — a much higher rate than what is legally allowed, as reported by Globo, one of Brazil’s most popular news organizations. Despite the financial disaster, the games weren’t canceled. According to Zurich University senior research fellow, Christopher Gaffney, “Rio will be in debt for the next 10 years following the 2014 World Cup and this month’s Olympics.”

But Rio’s problem is Brazil’s problem.

Moddy’s Investors Service recently cut the country’s investment-grade rating to “junk,” And with an over $706 billion national debt, Moddy’s reports, “progress in fiscal consolidation will be slow, and economic growth anemic, for the next two to three years.”

According to Mises Institute’s Leandro Roque, the current negative economic outlook in the country — and more specifically in Rio — has a lot to do with the expansion of easy credit policies. This has given the federal government the power to “print money” out of thin air and make the cost of consumer goods go up, hurting the poor and the middle class. But that’s not all that has hurt members of lower income brackets in the country.

During the preparations for the Olympics, hundreds of residents were forcibly removed from their homessimply because they were located near a stadium built for the games.

3. The military police are responsible for Olympics security, but the targets are civilians (and athletes!)

What many foreigners do not realize is that the military police, not civil, are responsible for “keeping the peace” in the streets. They have the power to patrol cities in search of drug-related criminals and others. They also have the power to pull over drivers for traffic infractions.

In order to increase their reach, the Ministry of Justice and Citizenry allowed the National Force of Public Safety (an organization created by the joint cooperation of various Brazilian Public Safety forces; Força Nacional de Segurança Pública or FNSP in Portuguese) to urge inactive military police officers to join the forces as volunteers in light of the Olympics. The request was made in early July. Although no estimate was released, segments of the military police force currently patrolling the streets of Rio are likely working as volunteers.

In an attempt to combat soaring crime in the city, the government has also assigned as many as 85,000 members of the armed forces to patrol Rio, including 21,845 members of the Brazilian Navy, Marine, and Air Forces.

But patrolling the streets for thieves and potential drug traffickers is not the only thing military police officers are doing in Rio.

A jiu-jitsu fighter from New Zealand, Jayson Lee, reached out to the civil police to press charges against military police officers who allegedly kidnapped him before the games began. According to the athlete, he was compelled to give officers BR$2,000 so they would let him go.

The man was originally pulled over and told he was not allowed to drive in the city without his passport, even after he presented his car’s documents to the officers. He was then told he had to go to the police department, where he would have to pay a fee. But as the exchange continued, officers told the athlete he could forego the trip by giving them the money directly. As the police escorted the athlete, he withdrew BR$2,000 and handed it to the policemen who had pulled him over.

After he complained, the military police opened an investigation, putting two officers allegedly involved in the exchange behind bars. They could be expelled from the force if they are found guilty of extortion.

In São Paulo, the military police were involved in an altercation with anti-Olympics protesters a day before the games officially started.

About 200 people were reportedly pepper-sprayed and beat up during a demonstration on one of the busiest main streets in downtown São Paulo, Avenida Paulista. The protest was interrupted just 15 minutes after it began, with police officers requesting to see people’s backpacks and handbags while collecting identification numbers. Moments later, the police blocked the street, cornering protesters under the São Paulo Museum of Art. As protesters attempted to leave, officers allegedly attacked them with batons and pepper spray.

4. Rio loves putting lipstick on pigs (seriously, the government claims to be environmentally-conscious — but it’s not)

According to the Associated Press, “the waterways of Rio de Janeiro are as filthy as ever, contaminated with raw human sewage teeming with dangerous viruses and bacteria.” The report is the result of a 16-month study commissioned by the news outlet.

Nevertheless, during the opening ceremony, the games’ organizers displayed a video narrated by actress Judi Dench that warned about the “problem of global warming and climate change … showing how rapidly the earth’s temperature has spiked over time, how drastically the Antarctic ice sheet has wilted in recent decades and how steadily seas are rising around the globe.” 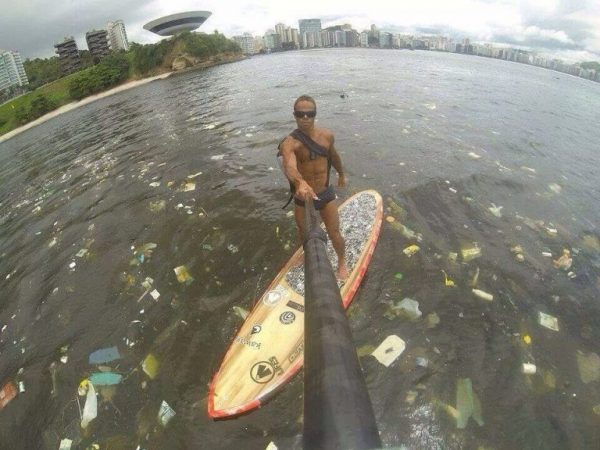 There was no mention of how rapidly Brazil’s environment has deteriorated, especially since the mismanagement of local dams led to one of the worst toxic mud spills in recent history. The incident was due to a dam collapse in an iron ore mine partially owned by Vale (formerly Vale do Rio Doce) — which was founded by the federal government — and Samarco, a company owned by Vale and the English-Australian company BHP Billiton.

So why wasn’t that discussed during the event?

5. Brazil’s plan to “clean” the streets of Rio ahead of the Olympics was responsible for the unlawful arrests of thousands of children

According to official data, police in Rio arrested 5,538 minors between 2015 and the first two months of 2016. While officials remain mum about the records of these arrests, it’s important to note Brazil has the second highest rate of child homicide in the worldl it trails only Nigeria. The United Nations recently claimed street children are being arrested “under unfounded suspicions and being arbitrarily placed in younger offenders institutions.” According to UNICEF, the U.N.’s children’s agency, “the number of children killed by violence in Brazil has doubled in the last two decades. As of 2013, the number of youth homicides in the country hit 10,500 per year.”

In Rio in particular, 16 percent of the city’s homicides are committed by police, Amnesty International reports — a concerning fact considering that each year, 10,500 children are killed in Brazil.

This article (5 Things the Media Isn’t Telling You About the Olympics) is free and open source. You have permission to republish this article under a Creative Commons license with attribution to Alice Salles and theAntiMedia.org. Anti-Media Radio airs weeknights at 11 pm Eastern/8 pm Pacific. Image credit: Atos. If you spot a typo, please email the error and name of the article to edits@theantimedia.org.