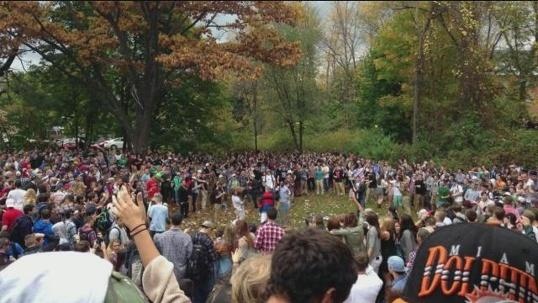 KEENE, N.H. —After a brief calm, riots near the area of Butler Court in Keene, New Hampshire, flared up again Saturday night.

Dozens of rioters threw objects at police and set fires near Blake Street around 9:30 p.m., as police officers wearing riot gear pushed the crowd back.

Earlier Saturday afternoon, Keene police say they fired pepper balls into a crowd of hundreds around the Butler Court and Wincester Street areas to diffuse the riot. Rioters threw glass bottles into the crowd and tore down street signs.

Police from as far away as Laconia responded along with New Hampshire state police and Keene police.

The situation was calm for the past few hours, but witnesses say the scene is once again chaotic.

According to reports, several people have been injured and some arrests have been made. Ambulances from several difference departments were sent to the scene.

“Over the past few days, a large number of out-of-town visitors have come to Keene for the Keene Pumpkin Festival. Subsequently, during the course of the evening on Friday, off-campus gatherings associated with the Keene Pumpkin Festival escalated at a number of locations around the city. Keene State College administrators have been coordinating closely with the City, and continue to do so. Keene State is also communicating regularly with students and parents of current students.

Incidents in the city, not on Keene State’s campus, subsided overnight but began to increase again by mid-afternoon on Saturday. One large assembly on Winchester Street drew multiple responses from Keene Police on Saturday afternoon. The College is not able to report on injuries or arrests — these incidents do involve Keene State students, and also visitors to Keene.”