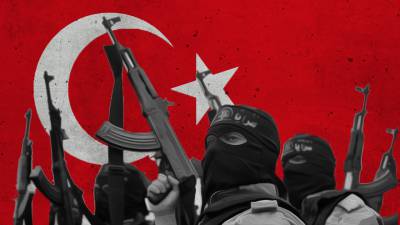 The western media has been almost completely silent about a rather explosive accusation leveled against Turkey: According to Russia’s UN Ambassador Vitaly Churkin, Ankara is the main supplier of weapons and ammunition to ISIS and other extremist groups operating in Syria.

The accusation was made in a letter to the UN Security Council, and included a detailed list of weapons and chemicals that Turkey has sent across its border into Syria.

According to Churkin, Turkey has been using humanitarian convoys to deliver the weapons.

Ankara’s use of “humanitarian” convoys to deliver weapons and supplies to “moderate” rebels has been well-documented. In November, Russia was accused of bombing a Turkish “humanitarian” convoy full of weapons:
The nature of the ‘humanitarian aid’ is also in question. Turkish media and the IHH say the trucks were transporting humanitarian aid to refugees in Azaz. However, the Turkish Cumhuriyet newspaper cited sources close to the Syrian government saying the convoy was delivering weapons to terrorist organizations.

The Hawar news agency reported that Turkey repeatedly sent convoys with arms to the Al-Nusra Front and other terrorist organizations under the guise of humanitarian aid. Reports on Twitter went further – they identified the arms as allegedly “Docka machine guns” and “small arms with ammunitions.”
Churkin’s letter “gave details of convoys with military equipment and munitions for IS fighters, and of funding allegedly arranged by the three foundations. It said one foundation has sent 7,500 vehicles with various supplies to IS-controlled territory since 2011.” According to Churkin,

among the supplies delivered to IS were ammunition for TOW anti-tank missile systems, RPG-7 grenade launchers and small arms, M-60 recoilless rifles, 82mm mortar shells, hand grenades, communication tools and equipment from the Turkish intelligence services.
Aside from an AP report, we’ve yet to see a single mainstream source cover this incredible development. Turkey has just been accused of directly arming the world’s most infamous terrorist group. Why the crickets?