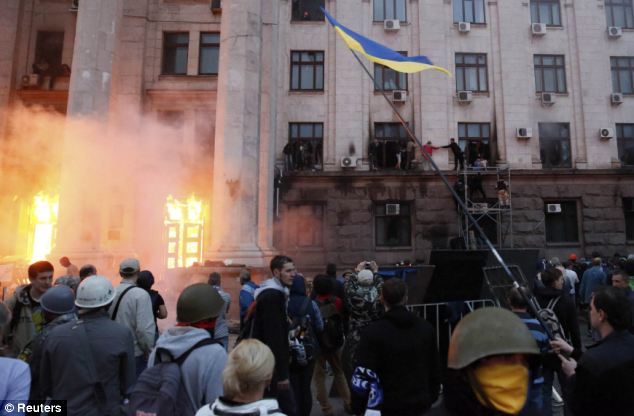 Russia and Ukraine inched closer to war  yesterday after ‘many’ pro-Moscow separatists were killed during a major military offensive to seize back a rebel-held city.

As fighting flared in the east of Ukraine, Vladimir Putin said the operation had ‘destroyed’ any hopes of peace.

The Kremlin said Kiev’s decision to deploy the army against its own people was a ‘catastrophe’ and called for an emergency meeting of the United Nations Security Council.

The crisis plunged closer to all-out conflict after government special forces launched a major ‘anti-terrorist’ drive to snatch back the key eastern city of Sloviansk.

But the operation in the rebel-held city was not going as quickly as hoped, he said on TV, and was ‘greatly complicated’ by the conflict taking place in population centres.

Mr Turchynov said two Ukrainian army personnel were killed in the fighting and accused pro-Russian forces of hiding behind civilians and hostages. He urged the Russian president to ‘stop threats and intimidation’ amid widespread belief that the Kremlin is supporting the militants.