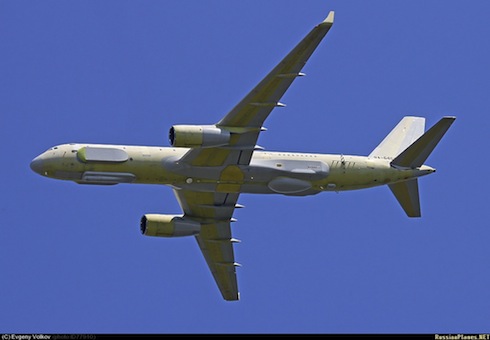 The Joint Chiefs of Staff of the U.S. military and American intelligence agencies have quietly pushed the White House in recent weeks to deny a new Russian surveillance plane the right to fly over U.S. territory. This week, the White House finally began consideration of the decision whether to certify the new Russian aircraft under the so-called “Open Skies Treaty.” And now the question becomes: Will the spies and generals get their way?

As the United States and Russia face off publicly over Ukraine, behind the scenes, Obama’s national security cabinet is having its own quiet feud over a long-standing agreement to allow Russian surveillance flights over U.S. air space.

The spies and the generals want to deny the Russians the overflight rights for its latest surveillance planes. The State Department, which ultimately makes that decision, has favored such certification. On Wednesday an interagency meeting of senior officials failed to reach consensus, delaying the decision until Obama takes it up with the National Security Council, according to U.S. officials involved in the dispute.

At issue is the Open Skies Treaty. First signed in 1992 and finally ratified in 2002, the treaty adopted by 34 nations allows the safe passage of planes equipped with advanced cameras and sensors that give governments the imagery and data they use to assess everything from compliance with arms control treaties to troop movements.

In their letter, the two lawmakers write, “We agree with the concerns expressed by the Intelligence Community and the military leadership of the Department of Defense” in their opposition to certifying the new Russian planes under the treaty.

The State Department on the other hand has argued the United States should live up to the treaty’s obligations and approve the new Russian aircraft. The decision to certify the planes and their sensors has been pending since late last year, long before the Ukraine crisis began. One senior U.S. official said, “This isn’t just an issue between the United States and Russia. Our allies and partners depend on this treaty for insight into Russia because they don’t have the same capabilities as the United States.”

The Russians use the aircraft today to monitor U.S. nuclear weapons as part of arms control agreements between both countries. The Russian planes, according to U.S. officials involved in the dispute, contain a new sensor package that would allow Moscow to surveil American nuclear assets with a level of precision and detail that makes U.S. military and intelligence leaders deeply uncomfortable.

A letter first published by the Weekly Standard on April 13 from two Republican and two Democratic members of the Senate Select Committee on Intelligence said the Russian Federation had just completed construction of aircraft that will “support digital photograph equipment, sideways-looking synthetic aperture radar, and infrared equipment.”

A U.S. official familiar with the dispute and sympathetic to the concerns of the military and intelligence community told The Daily Beast that the worry over the new Russian aircraft is independent of the standoff in Ukraine. “This would have been an issue even if there was no Ukraine crisis,” this official said.

In some ways, however, the Ukraine showdown has placed pressure the White House to hold off on further angering the Russians though. The State Department, which has worked with Russia to iron out at least an agreement in principle to begin to disarm the pro-Russian militias that have seized eastern Ukrainian cities wants to allow the new Russian aircraft to fly over U.S. airspace.

The Ukraine crisis has complicated the decision making process on the Open Skies issue. Ukraine’s military has still failed to take back cities that have fallen to militias that western leaders have said publicly are orchestrated by Russia’s special operations units known as the Spetsnaz.

In Geneva, Secretary of State John Kerry and Russian Foreign Minister Sergei Lavrov announced the beginning of a process to de-escalate the crisis. But Lavrov also promised Kerry there were no military plans to take Crimea in late February only to see Spetsnaz soldiers in uniforms without insignia take the peninsula’s airports and government buildings.

In Moscow on Thursday there was the most bizarre spectacle. Edward Snowden, the NSA contractor now wanted in U.S. court to face Espionage Act charges, asked Russia’s president whether his government collected as much internet data as his old government did.

Over the weekend in nearby Moldova inside the quasi-independent region of Transnistria, the United States observed Russian troop movements that looked like they may be preparing to launch stealth operations into southern Ukraine.

But nonetheless there were some signs that the fighting is coming to a pause. Lavrov on Thursday agreed to support the demobilization of the militias that Kerry himself said his government was responsible for helping organize.

President Obama expressed cautious optimism that the agreement in Geneva could bring the region awayfrom the brink of war. “I don’t think we can be sure of anything (in the Ukrainian crisis). I think there is the possibility, the prospect, that diplomacy may de-escalate the situation,” he said at the White House.

The White House convened a meeting of top deputies of its national security cabinet to discuss the issue on Wednesday. National Security Council spokeswoman, Caitlin Hayden declined to comment on that meeting.

“Without prejudging the outcome of that review, I would note that the Open Skies Treaty enhances confidence and transparency by allowing the 34 countries that are parties to it to obtain information on the military forces and activities of other Treaty partners,” she said. “It contributes to European security by providing images and information on Russian forces, and by permitting observation flights to verify compliance with arms control agreements.”