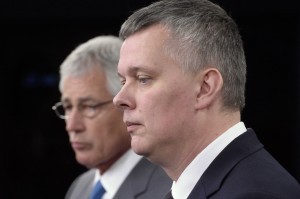 Poland and the United States will announce next week the deployment of U.S. ground forces to Poland as part of an expansion of NATO presence in Central and Eastern Europe in response to events in Ukraine. That was the word from Poland’s defense minister, Tomasz Siemoniak, who visited The Post Friday after meeting with Defense Secretary Chuck Hagel at the Pentagon on Thursday.

Siemoniak said the decision has been made on a political level and that military planners are working out details. There will also be intensified cooperation in air defense, special forces, cyberdefense and other areas. Poland will play a leading regional role, “under U.S. patronage,” he said.

But the defense minister also said that any immediate NATO response to Russian aggression in Ukraine, while important, matter less than a long-term shift in the defense postures of Europe and America. The United States, having announced a “pivot” to Asia, needs to “re-pivot” to Europe, he said, and European countries that have cut back on defense spending need to reverse the trends.

“The idea until recently was that there were no more threats in Europe and no need for a U.S. presence in Europe any more,” Siemoniak said, speaking through an interpreter. “Events show that what is needed is a re-pivot, and that Europe was safe and secure because America was in Europe.”

How likely is such a reversal on defense spending? Siemoniak said there was widespread support at a recent meeting of European defense ministers. “Now they’ll go back to their presidents, prime ministers and ministers of finance, and this will stop being easy,” he admitted. “But the impetus is very strong.”

The strongest impetus, he said, is not even Russia’s illegal annexation of Crimea, but President Vladimir Putin’s bald lies about Russian actions there and his exposition of a new doctrine allowing Russia to intervene in any country where Russian-speaking populations are, in Russia’s judgment, under threat. This poses a potential danger to the Baltic nations, which are members of NATO, and even more to Moldova, Belarus and central Asian nations that are not, he said.

Like President Obama, Siemoniak said it’s too soon to judge the agreement reached Thursday in Geneva to defuse tensions. He said he believes that Russia’s “special operation in eastern Ukraine didn’t go as planned” and that Putin may have decided to play a longer game.

“He holds different instruments that he can use to influence events in Ukraine,” Siemoniak said. Putin will keep in reserve the option of an outright military incursion, “but the political, military and financial costs would be gigantic.” The 46-year-old minister mused that until recently NATO was wondering what mission it would have, if any, once its troops came home from Afghanistan.

“Now we have an answer to that question,” he said.