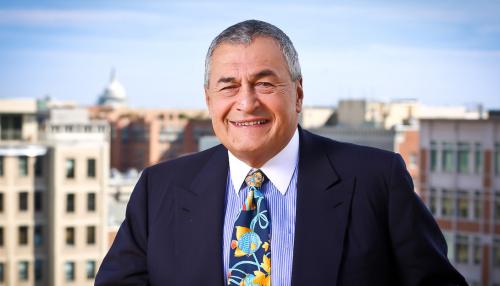 “The Podesta Group is a lobbying and public affairs firm based in Washington, D.C.. It was founded in 1988 by brothers John Podesta and Tony Podesta.” – Wikipedia

Russia’s largest bank, Sberbank, has confirmed that it hired the consultancy of Tony Podesta, the elder brother of John Podesta who chaired Hillary Clinton’s presidential campaign, for lobbying its interests in the United States and proactively seeking the removal of various Obama-era sanctions, the press service of the Russian institution told TASS on Thursday.

Previously, The Daily Caller reported that Tony Podesta was proactively lobbying for cancellation of a range of anti-Russian sanctions against the banking sector. In particular, he represented interests of Sberbank and was paid $170,000 for his efforts over a six-month period last year to seek to end one of the Obama administration’s economic sanctions against that country.

Podesta, founder and chairman of the Podesta Group, is listed as a key lobbyist on behalf of Sberbank, according to Senate lobbying disclosure forms.

His firm received more than $24 million in fees in 2016, much of it coming from foreign governments, according to the nonpartisan Center for Responsive Politics.

Former President Barack Obama imposed the Russian sanctions following the break out in violence in east Ukraine in 2014.

The two Russian banks spent more than $700,000 in 2016 on Washington lobbyists as they sought to end the U.S. sanctions, according to Senate lobbying disclosure forms and documents filed with the Department of Justice.

The Podesta Group charged Sberbank $20,000 per month, plus expenses, on a contract from March through September 2016.

Both Sberbank and VTB Capital have faced severe cash shortages due to plunging oil prices, plus the U.S. sanctions. If Obama’s sanctions were lifted, however, both banks could legally seek funds from American financial institutions.

The lobbying campaign targeted Congress and the executive branch, with Podesta and other lobbyists arranging at least two meetings between Sberbank officers and Department of State officials, according to Elena Teplitskaya, Sberbank’s board chairman, who spoke to House aides in August.

“The Democrats are sitting there trying to convince us that the Russians are trying to throw the election to Trump,” a congressional aide who requested anonymity and met Teplitskaya told TheDCNF.

“And then they’re with us here in the House and meeting directly with the administration behind closed doors on the issue of the sanctions. The hypocrisy could not be any richer,” he said.

As the Caller puts it, “the discovery of high-profile Democrats like Podesta being paid lucrative fees for lobbying to lift U.S. sanctions on Russia contrasts with charges from Democrats that President Donald Trump and his key aides are soft on Russia while the Obama administration was tough on Moscow.”

Podesta is one of the Democrat’s highest profile lobbyists who enjoys close personal and business connections to former Presidents Obama and Bill Clinton. John Podesta was chief of staff in Clinton’s White House and special counselor in the Obama White House.

Some more details on the meeting: joining the Podesta lobbying campaign was David Adams, who describes himself on the Podesta Group website as a “trusted adviser” to Hillary Clinton, serving as her as assistant secretary of state for congressional affairs. Another Podesta lobbyist was Stephen Rademaker, a former Department of State official in the George W. Bush administration.

The Podesta Group represented Sberbank and its subsidiaries, Troika Dialog Group in the Cayman Islands, SBGB Cyprus Ltd in Nicosia, Cyprus, and SB International in Luxembourg. Troika Dialog also was related to Klein, Ltd., a Cayman Island organization that once funneled tens of millions of dollars to environmental groups to oppose low-cost fracking in the U.S., which was hurting the Russian oil industry.

Regular readers will recall that the Sberbank-Podesta relationship goes back many years. Sberbank was the lead financial institution in the Russian deal to purchase Uranium One, owned by one of Bill Clinton’s closest friends, Frank Giustra. Giustra and Bill Clinton lead the Clinton-Giustra Enterprise Partnership, an integral part of the Clinton Foundation.

Giustra has additionally donated $25 million to the Clinton Foundation.

Giustra sought to sell his stake in uranium reserves that included ore deposits in the Western United States, and Hillary Clinton, who as secretary of state, approved the sale. And in one felled swoop, 20 percent of America’s uranium ore was sold to the Russian state atomic agency.

During the pending sale, the Podesta Group represented Giustra’s company and tried to advance the transaction.

We do not expect to read about the Podesta lobbying relationship with Russia’s largest bank in such truth-seeking, at least according to their ad campaigns, publications as the NYT and/or WaPo.