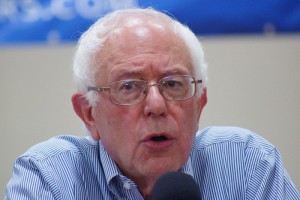 Being from the hunter-friendly state of Vermont, Sen. Bernie Sanders has generally held a more lax position on gun control than most progressives. However, after his Democratic presidential rival Hillary Clinton began hammering him on the issue, Sanders has reversed his position on a controversial bill that would allow victims of gun violence to sue gunmakers and dealers:

Sanders will co-sponsor legislation that would allow the victims of gun violence to sue firearms manufacturers and dealers who sell the weapons to criminals, his office confirmed Thursday.

Currently, the gun industry is shielded from lawsuits by a controversial law that Sanders voted for in 2005. Clinton, the Democratic presidential front-runner, and gun control groups have criticized Sanders for siding with the gun lobby.

Sanders is now joining efforts to roll back those protections for the gun industry.

Dan Gross, president of the Brady Campaign to Prevent Gun Violence — an anti-gun group that last year unsuccessfully attempted to hold an online ammo dealer legally responsible for the 2012 Aurora, Colo. movie theater shooting — said backing the controversial bill “is the least [Sanders] can do.” Although, Gross said he still prefers Clinton because “she didn’t wait until the campaign to champion gun violence prevention.”