Did Saudi Arabia Just Gun Down A Boat Full Of Somali Refugees? 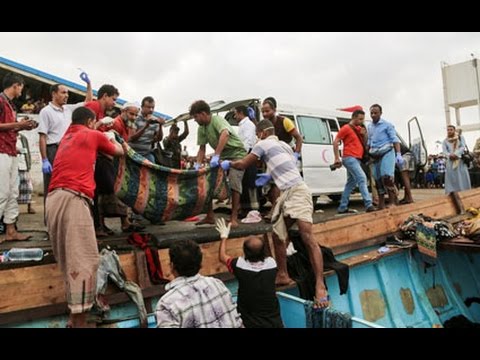 Evidence perceived seems to show that Saudi Arabia was likely responsible for gunning down a boat full of Somali refugees trying to flee war-torn Yemen, murdering at least 42 people.

The boat was en route to Sudan through the Bab-el-Mandeb, a strait between Yemen, Djibouti, and Eritrea that connects the Red Sea to the Gulf of Aden, Foreign Policy reported.

More than forty people including women and children were shot dead aboard a boat carrying 140 Somali refugees in the Red Sea off war-torn Yemen, officials said.

The refugees were struck by weapons fire in the waters off rebel-held Hodeida, but the boat managed to dock in the city’s port, an official there said.

A witness told Al Jazeera that an Apache helicopter was responsible for the attack.

“They shot at us, we could see the flashes of bullets. We were shouting at them to hear us. Signaling with lights, but they kept shooting. The Apache came above us and shot at us. Our friends were dying,” Al-Hassan Ghaleb Mohammed, a survivor, told Al Jazeera.

However, survivors conveyed conflicting accounts of who may have been behind the attack.

“We do not know who carried it out, but survivors said they came under attack from another boat at 9 p.m., the crew used lights and shouted to signal this is a civilian boat,” Iolanda Jaguemet, ICRC spokesperson, told Reuters news agency.

“Nevertheless it did not have any effect and a helicopter joined in the attack.”

It was not immediately clear who was behind the attack. Although, according to more than one witness the attack was committed by an Apache helicopter, so we can determine which countries may have been responsible by using Deagel.com, a site that lists each countries military equipment.

The countries that own Apache military helicopters in the surrounding region are – Israel, Saudi Arabia, Egypt and United Arab Emirates all own various models of the Apache helicopter.

While the rest– Sudan owns the Mi-35M, Ethiopia, Eritrea and Yemen own the Mi-24, and Jordan owns the AH-1W Super Cobra.

The likely culprit of the attack is Saudi Arabia, whose country is near the Yemen Red Sea coast, but the incident is still unclear.

The rebel-controlled Saba agency accused the Saudi-led coalition battling insurgents in the region of attacking the refugees but failed to provide additional details.

Saudi Arabia has been in conflict with Yemen for the past few years in a bitter war against the Iran-backed Houthi rebels in the region.

The Saudi Arabia backed Arab Colation has denied responsibility for the attack.

Major General Ahmed Assiri, spokesman for the coalition, dismissed the accusation and told AFP that the force had not been involved in fighting in Hodeida.

“There has been no firing by the coalition in this zone,” Assiri said.

The International Organization for Migration, which has operations in Yemen, said 42 bodies were recovered and called the attack “unacceptable”.

Eighty survivors were rescued after the attack and taken to a detention center in Hodieda, Yemen, the International Organization for Migration’s Laurent De Boeck told AP.

More than 30 of those wounded were reported to have been taken to the hospital.

De Boeck added that civilian casualties would’ve been avoided in Friday’s attack if “they could have checked to know who was in that boat before firing on it.”

“UNHCR is appalled by this tragic incident, the latest in which civilians continue to disproportionately bear the brunt of conflict in Yemen,” a spokesperson for the U.N. refugee agency said.

The port official said dozens of Somalis who survived the attack, as well as three Yemeni traffickers, had been taken to the city’s prison.

According to Daily Nation, an additional “seven people were also killed off Hodeida by another unidentified gunfire, while a further seven were killed in a car near Mokha,” hospital workers said.

Saudi Arabia was accused of human rights violations by the UN in October 2016 when 114 were killed and 613 injured in an attack on a funeral in Sanaa on October 8th of the same year.

You can watch the gruesome video below that shows Somalis carrying dead bodies from the Apache attack and the bodies scattered lying on the ground.