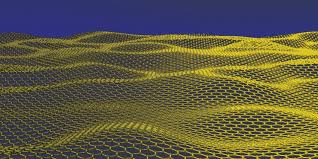 A recently discovered form of carbon graphite – the material in pencil lead – has turned out to have a completely unexpected property which could revolutionise the development of green energy and electric cars.

Researchers have discovered that graphene allows positively charged hydrogen atoms or protons to pass through it despite being completely impermeable to all other gases, including hydrogen itself.

The implications of the discovery are immense as it could dramatically increase the efficiency of fuel cells, which generate electricity directly from hydrogen, the scientists said.

The breakthrough raises the prospect of extracting hydrogen fuel from air and burning it as a carbon-free source of energy in a fuel cell to produce electricity and water with no damaging waste products.

“In the atmosphere there is a certain amount of hydrogen and this hydrogen will end up on the other side [of graphene] in a reservoir. Then you can use this hydrogen-collected reservoir to burn it in the same fuel cell and make electricity,” said Professor Sir Andrei Geim of Manchester Univeristy.

Ever since its discovery 10 years ago, graphene has astonished scientists. It is the thinnest known material, a million times thinner than human hair, yet more than 200 times stronger than steel, as well as being the world’s best conductor of electricity.