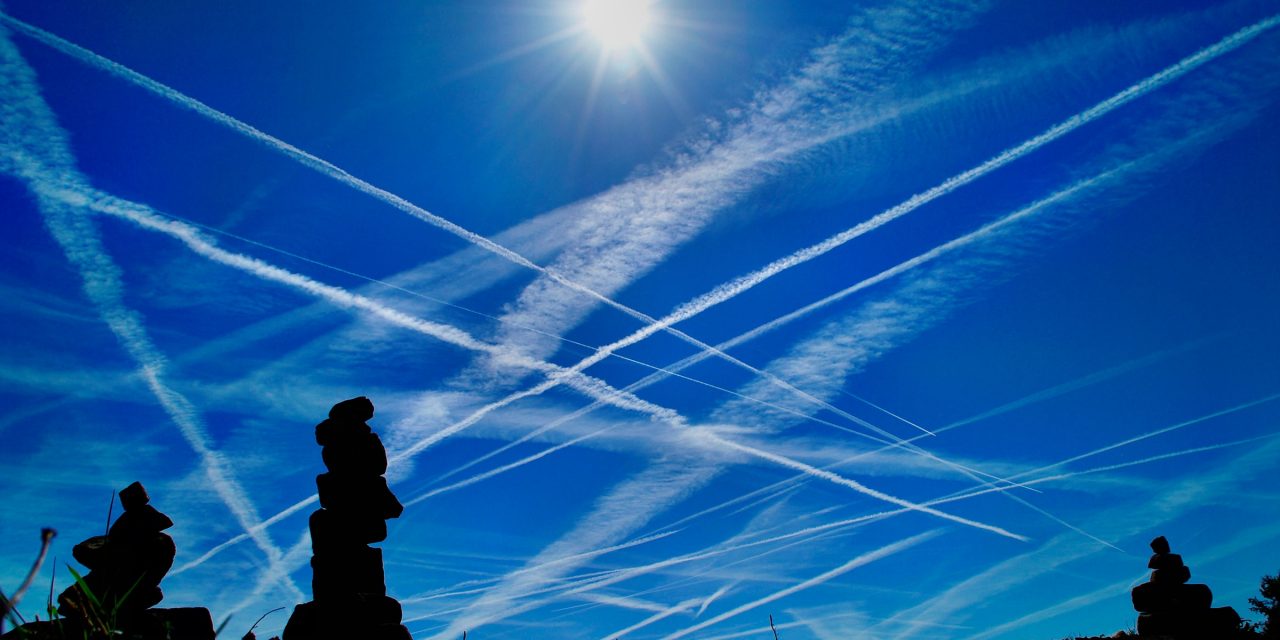 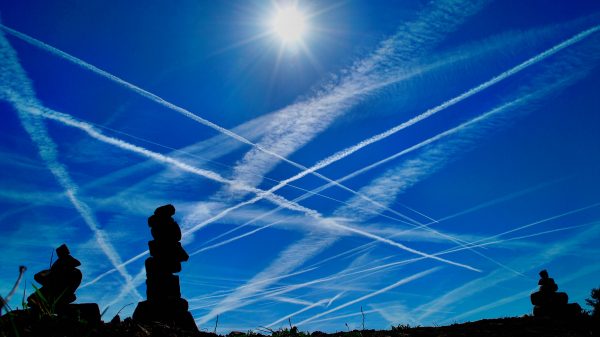 Geo-engineering is an umbrella term for deliberate climate intervention that includes spraying the sky with aerosols to reflect solar radiation away from Earth in order to cool the planet and to save the environment and humanity from the effects of supposedly man-made global warming.

There is evidence that this program has already been implemented for many years using unidentified chemical aerosols, known as chemtrails.

A geoengineering/ chemtrails experiment using a balloon to spray sulfur particles into the sky to reflect solar radiation back into space is planned for New Mexico within a year by scientist David Keith.

Keith manages a multimillion dollar research fund for Bill Gates. Gates has also gathered a team of scientist lobbyists that have been asking governments for hand-outs to for their climate manipulation experiments with taxpayer money.

Geo-engineering is touted as a last-ditch effort to save people and the planet from global warming.

But the truth is that geoengineering can alter rain cycles leading to droughts and famine that could result in billions of deaths!

Therefore, Bill Gates appears to be using his concern over global warming to cloak his real intent of controlling weather and/or depopulation.

The Mount Pinatubo volcano in the Philippines erupted in 1991, spewing 22 million tons of sulfur dioxide (SO2) into the upper atmosphere/stratosphere.

A 2008 study from Rutgers University based a model on Mount Pinatubo sulfur dioxide (SO2) emissions and applied it to geoengineering; the scientists said that they expected overall global cooling, but some regions would experience an increase in greenhouse gases and warming, as was recorded after Pinatubo erupted.

Based on the SO2 volcanic model, the scientists reported that geoengineering aerosols sprayed in tropical or Arctic regions are likely to disrupt African and Asian/Indian summer monsoons, threatening the food and water supply for billions of people!

While the scientists, led by Alan Robock, who performed the experiments appear to believe in man-made global warming, they do have stern warnings against the dangers of geoengineering.

The Max Planck Institute conducted a study of geoengineering models based on volcanoes, but the study was unrealistic because it used climate models with 400% more carbon dioxide than the pre-industrial era.

However, their results showed that geo-engineering will cause a strong decrease in rainfall (a 15% loss in North America and Eurasia and a 20% decrease in South America). Overall, global rainfall would be reduced by 5%.

Unless one considers the financial benefits (government and private grants), it is bewildering why the academia would support geoengineering.

Geo-Engineering Can Cause Warming

Geo-engineering can actually cause global warming when tampering with clouds in the upper atmosphere/ stratosphere.

The Gates-funded scientist lobbyists propose spraying sulfur dioxide 30 miles above Earth and the New Mexico experiment proposes spraying 15 miles above surface-both of these fall within the parameters of the upper atmosphere/ stratosphere.

The troposphere is the lowest portion of the Earth’s atmosphere, extending an average of 4 to 12 miles above surface.

Clouds that are in the lower troposphere are generally thick white clouds with a high rate of albedo or reflectivity of the sun’s rays away from Earth that produce a cooling effect.

However, the experiments are to be conducted above this level in the upper atmosphere/stratosphere.

The upper atmosphere is called the stratosphere and extends as high as 31 miles above the Earth’s surface. The clouds in the higher stratosphere are generally thin, have a lower albedo reflective rate and act like a blanket that traps heat.

Both experiments propose dumping SO2 in the upper atmosphere/stratosphere, creating a heat-trapping blanket that would theoretically increase warming. This is the opposite of Gates’ stated goal to cool the planet.

(Note: most long-distance planes fly at 6 miles above surface, in the lower atmosphere/troposhere)

What About the EPA?

Given that the EPA claims that sulfur dioxide (SO2) emissions cause health problems and early death and that they are shuttering coal plants over emissions, you may be wondering why the EPA isn’t screaming bloody murder over Gates’ SO2 aerosol-spraying experiments.

The answer can be found on the EPA’s own website where they promote giving regulatory power over geoengineering/ chemtrails to the UN and/or developed countries that fund the programs. The EPA is abdicating power to international interests.

Bill Gates’ failure to address the EPA’s dire warnings of the dangers of SO2 is proof that he is aware that the EPA’s claims are grossly overstated or that he doesn’t really care about the environment and has ulterior motives.

Global warming is a ruse that claims that life on planet Earth is in grave danger- this alarmism is used for political gain.

Global warming is a hoax based on manipulated science from the UN’s Intergovernmental Panel on Climate Change. The UN currently is assuming control over geoengineering through its Convention on Biological Diversity treaty that declared a moratorium on experiments, except in some cases.

Geo-engineering is either a risky adventure to test ignorant theories or a scheme to control weather, water and food supplies.

Bill Gates’ record as a depopulation enthusiast supports the argument that geoengineering is a weather domination scheme that may be used as a weapon threatening the lives of billions of people.