Seeing In The Dark. Light Pollution. 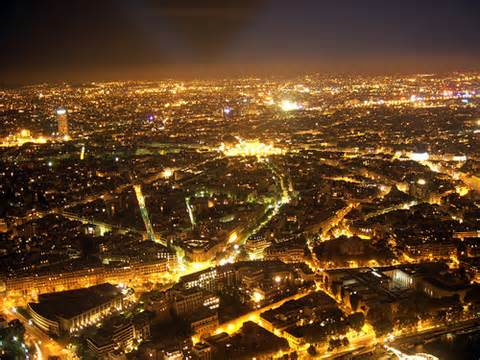 (pbs.org) Light pollution—the needless shining of bright lights into the night sky—has robbed whole generations of the chance to see nature on its largest scale. It is estimated that as many as eighty percent of all the people alive today have never even glimpsed the Milky Way. (When a massive power outage struck southern California in the 1990s, Los Angeles residents reportedly called 911 to express alarm about strange clouds hovering overhead; they were seeing the Milky Way for the first time.) The problem is not lighting in itself, but the billions of dollars worth of energy wasted each year by spilling light into the sky rather than confining it to the ground where it is needed.

Light pollution has driven professional astronomers to site their observatories on remote islands and mountaintops, while robbing amateur astronomers—and their children—of faint stars and galaxies lost in the glare.
Fortunately, there are solutions that save money and preserve the dark night sky. The most important step is to shield outdoor lighting so it is cast downward. Other measures include putting motion sensors on the security lights that, in so many cases, flood private yards all night; this actually increases security while saving on energy bills. It also helps to limit the specific wavelengths in which the light is emitted.

Much of modern astronomy depends on spectroscopy, where we must be able to detect light at the specific wavelengths corresponding to various elements. Low-pressure sodium lamps emit light at only a few discrete wavelengths, leaving the rest of the spectrum free of contaminating light. Shielded low-pressure sodium lamps are used, for instance, in the city of Tucson, Arizona; as a result you can look up from a downtown Tucson intersection at eleven p.m. and see more than a thousand stars. These lights are also extremely energy-efficient, making them the most cost-effective form of street lighting.
If we all work together, future generations can regain some of the pleasures of seeing in the dark.
More information on light pollution is available from the International Dark-Sky Association.