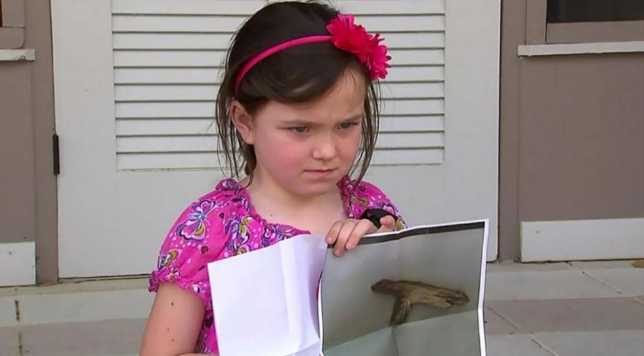 Brandy Miller said her daughter, Caitlin and two of her friends were playing their favorite game. One of the girls was pretending to be a Queen and the other a Princess. Caitlin pretended to be their private security guard. She grabbed a stick that resembled the appearance of a gun in order to protect the ‘Queen’ and ‘Princess’.

North Carolina mom says her 5-year-old daughter was suspended from school for playing with a stick resembling a gun: https://t.co/UkgXlMFxg8 pic.twitter.com/VX7Rlsd704

As Caitlin pretended to protect the girls, wielding the ‘stick gun,’ a boy ran and told a teacher who then snatched Caitlin and hauled her off to the principal’s office.

Assistant Principal Brooke Griffie stated in a letter sent to Brandy Miller that Caitlin was suspended for one day for:

“Turning a stick into a gun and threatening to shoot and kill other students.”

Hoke County school officials said in a statement “the district does not tolerate assaults, threats or harassment from any student.”

“It is our duty to ensure the safety of our students and staff. Therefore, we respond to all threats in a serious manner and take appropriate action.”

Outraged over the situation, Brandy Miller stated while she understands the strict policy, she demanded the school to apologize to Caitlin. Saying, “tell her that it is okay for her to be 5 and have an imagination.”

“She’s confused. Nobody explained anything to her.”

“One minute she is playing with her friends and the next her teachers are dragging her to the principal’s office.”

Caitlin has since returned to school Tuesday, after her one day suspension.

School suspensions similar to this occur more frequently than you may think.

Last May, a kindergarten student in Brighton, Colorado was suspended for wielding a bubble-blowing “gun” at recess.

In March 2015, a 6-year-old in Colorado Springs had the same thing happen when he pointed his index finger like a gun at a classmate while saying, “Boom-You’re dead.”

Also, in March 2013, a 7-year-old in Anne Arundel County, Maryland was suspended for nibbling a breakfast pastry into the shape of a gun.

While it is important to promote and practice a safe environment for our children, school officials must use common sense.

One would hope potential damage caused to this bright, young mind by the school officials that suspended her for playing make-believe would be alarming to educators – with steps taken to avoid similar incidents in the future.