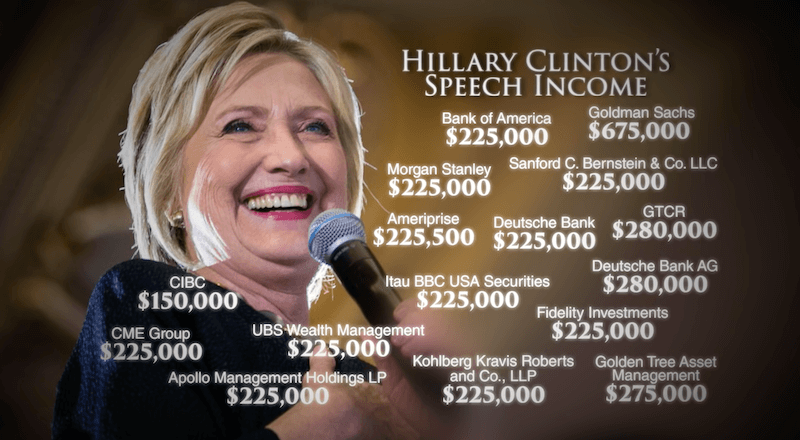 Included in the latest Wikileaks release are portions of Hillary Clinton’s controversial paid speeches to Goldman Sachs — specifically, 25 flagged excerpts that her campaign was worried about being revealed to the public. 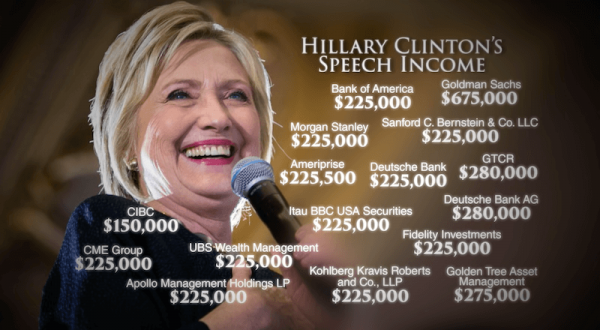 On Friday, Wikileaks released 2,060 emails hacked from Clinton campaign chairman John Podesta. The email containing the portions of the speeches were sent to Podesta and other high ranking members of her staff in January — meaning that they had access to the transcripts all along.

Clinton has long been under pressure to release the content of the speeches to Goldman Sachs that earned her $675,000. During the primary, Senator Bernie Sanders infamously asserted that the speeches must have been Shakespearean to be worth so much money — implying that the payments were actually for favors or promises.

“Team, attached are the flags from HRC’s paid speeches we have from HWA. I put some highlights below. There is a lot of policy positions that we should give an extra scrub with policy,” the email sent by a staffer on January 25, 2016, read.

The first excerpt from a speech at at Goldman-Black Rock,on February 4, 2014, reads as follows:

*CLINTON ADMITS SHE IS OUT OF TOUCH*

*Hillary Clinton: “I’m Kind Of Far Removed” From The Struggles Of The Middle Class “Because The Life I’ve Lived And The Economic, You Know, Fortunes That My Husband And I Now Enjoy.”

“And I am not taking a position on any policy, but I do think there is a growing sense of anxiety and even anger in the country over the feeling that the game is rigged. And I never had that feeling when I was growing up. Never. I mean, were there really rich people, of course there were. My father loved to complain about big business and big government, but we had a solid middle class upbringing. We had good public schools. We had accessible health care. We had our little, you know, one-family house that, you know, he saved up his money, didn’t believe in mortgages. So I lived that. And now, obviously, I’m kind of far removed because the life I’ve lived and the economic, you know, fortunes that my husband and I now enjoy, but I haven’t forgotten it.”

Next, speaking before the National Multi-Housing Council, on April 24, 2013, Clinton admitted that you need to have policy platforms that you feed the public — and your real ones.

*Clinton: “But If Everybody’s Watching, You Know, All Of The Back Room Discussions And The Deals, You Know, Then People Get A Little Nervous, To Say The Least. So, You Need Both A Public And A Private Position.”

“I mean, politics is like sausage being made. It is unsavory, and it always has been that way, but we usually end up where we need to be. But if everybody’s watching, you know, all of the back room discussions and the deals, you know, then people get a little nervous, to say the least. So, you need both a public and a private position. And finally, I think — I believe in evidence-based decision making. I want to know what the facts are. I mean, it’s like when you guys go into some kind of a deal, you know, are you going to do that development or not, are you going to do that renovation or not, you know, you look at the numbers. You try to figure out what’s going to work and what’s not going to work,” she said.

Speaking at the Goldman Sachs AIMS Alternative Investments Symposium on October 24, 2013, admitting that she only speaks about holding Wall Street accountable for political gain:

*Clinton Said That The Blame Placed On The United States Banking System For The Crisis “Could Have Been Avoided In Terms Of Both Misunderstanding And Really Politicizing What Happened.”*

“That was one of the reasons that I started traveling in February of ’09, so people could, you know, literally yell at me for the United States and our banking system causing this everywhere. Now, that’s an oversimplification we know, but it was the conventional wisdom. And I think that there’s a lot that could have been avoided in terms of both misunderstanding and really politicizing what happened with greater transparency, with greater openness on all sides, you know, what happened, how did it happen, how do we prevent it from happening? You guys help us figure it out and let’s make sure that we do it right this time. And I think that everybody was desperately trying to fend off the worst effects institutionally, governmentally, and there just wasn’t that opportunity to try to sort this out, and that came later.”

The list goes on and on, including statements admitting that she could not run for president without Wall Street funding.

Not even two weeks after this email was sent, during the debate with Sanders on February 4, he asked her when she would release the transcripts of these paid speeches.

“I will look into it. I don’t know the status, but I will certainly look into it,” Clinton asserted.

She never released them, and now we know why.