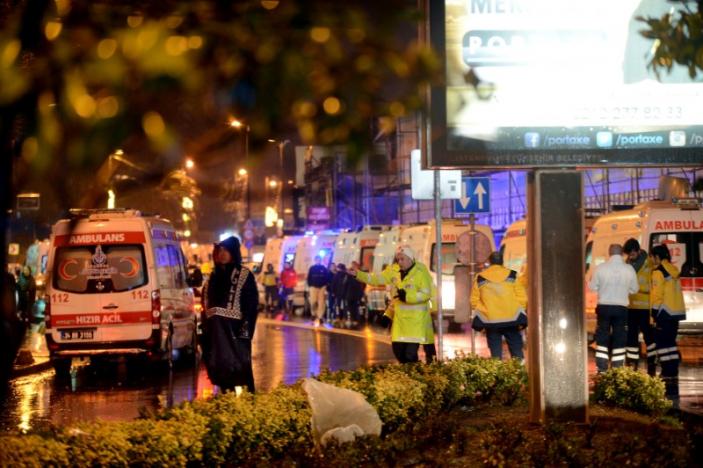 “An armed man has killed at least 39 people, including one police officer, in a mass shooting on Reina, a popular night club in Istanbul,” Governor Vasip Sahin, said early on Jan. 1 live.

Ambulances line up on a road leading to a nightclub where a gun attack took place during a New Year party in Istanbul, Turkey, January 1, 2017. Ismail Coskun/Ihlas News Agency via REUTERS

In addition to the people murdered it’s been reported that “dozens of people were also wounded in the attack,” local broadcasters reported.

The condition of the situation is not yet known whether the attacker is inside the night club or not. The apparent question was denied by the governor who did not respond during a press conference to a reporter who asked.

The killer is still unknown and on the loose in  a video from inside the club he is seen switching clothes taking off his jacket.

The attacker reportedly screamed “Allahu Akbar” during the attack according to the Mirror.

“A Lebanese woman who gave her name as Hadeel and who was in the club with her husband has told of the moment the carnage unfolded.

She said:“At first we thought some men were fighting with each other.

“Then we heard the sound of the gunfire and ducked under the tables.

“We heard the guy screaming Allahu Akbar (God is Greatest), all three of us heard that … We heard his footsteps crushing the broken glass.”

“We got out through the kitchen, there was blood everywhere and bodies.”

Reina is a nightclub for Turkish and foreign elites.

The Reina club owner Mehmet Kocarslan, was interviewed by Dogan news agency, he told the agency that police had boosted security in the upscale neighborhood of Ortakoy and its vicinity for the new years festivities.

The security measures included tents at key locations with a 24-hour police presence and complementary efforts by the coast guard at sea.

“Despite all these precautions by police forces, unfortunately, this painful event took place. We don’t know what to say,” he added. “We are at the point where all words end.”

Turkish Interior Minister Suleyman Soylu has said the gunman was still at large. “The search for the terrorist continues… Our security forces have started the necessary operations. God willing he will be caught in a short period of time.”

The gunman had escaped as he changed clothing during the massacre early on thought to be wearing a full Santa Claus outfit it’s now known that he was only wearing just the hat.

17,000 police officers were put on duty to defend Turkey, including – some disguised as Santa Clause and as street vendors Anadolu reported.

The PKK has denounced the attack through its Executive Committee Member Murat Karayilan who told journalists that they were not involved.

“We, Kurdish and Kurdistan have no interest in this attack. I do not think TAK will do such an attack. Because all the Kurdish and Kurdish forces want to win the people of Turkey. Our case is justified. We want to win the peoples of Turkey and the world. The Kurdish freedom struggle is also a struggle for the democratization of Turkey at the same time. That’s why we do not target innocent and civilian people. No Kurdish power does not target civilians. We are fighting against Turkish colonialism, “ He, said.

Footage from inside the massacre shows dead bodies scattered and the floor splattered in blood that video is below WARNING EXTREMELY GRAPHIC.:

Sahin said “the attacker killed a police officer and a civilian at the gate of Reinas, before entering inside and opening fire on the crowd celebrating the new year.” He added, “that the situation was seen as a terrorist attack.”

However, there has been no claim of responsibility by any group so far for the attack that has since claimed the lives of 35 people.

CNNTurk reported that some 50 to 60 ambulances have been dispatched to the scene.

“The inglorious (attacker) raved through the place with Kalashnikovs. The U.S. intelligence warned over such an attack about one week or 10 days ago and measures have been taken, including the sea front. And look what has happened then,” Mehmet Koçarslan told Toygun Atilla a reporter for Hürriyeta Turkish newspaper.

(THIS IS A DEVELOPING STORY, DETAILS WILL BE ADDED AS MORE INFORMATION BECOMES AVAILABLE.)