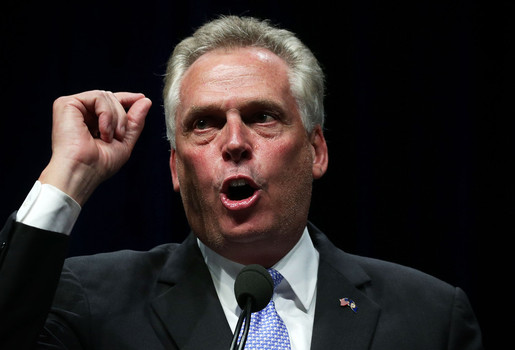 Fox News is reporting this morning that a Virginia state senator is making good on his promise to push for defunding armed bodyguards for anti-gun Gov. Terry McAuliffe unless the Democrat does an about face on an October order to prohibit firearms in most state office buildings.

It brings up an interesting question that could apply to any government official anywhere, from mayors on up. If an elected official is opposed to the carrying of defensive sidearms by average citizens, should that official automatically lose his/her security guards?

Virginia State Sen. Charles Carrico, a Republican, is quoted by Fox News observing, “It’s easy for someone who is surrounded by armed state policemen to tell someone else they can’t carry a weapon to protect themselves.”

If the idea were to spread, it’s likely that herds of liberal politicians would be running for cover, complaining that they “need” the protection. This would be the perfect way to test the “needs” standard for issuing carry permits in such states as New York, New Jersey and Maryland by applying it to officials who insist they need security.

That comes from a telephone survey conducted last week among 2,500 likely voters. The result follows a pattern that has been consistent for more than a year with a large majority of survey respondents saying the country is headed in the wrong direction.

By no small coincidence, the Daily Caller reported yesterday that lawmakers in various states are prepping for new gun control battles in their respective Legislatures. The same story also noted that anti-gun billionaire Michael Bloomberg’s lobbying organization is sending troops to several states to push his gun control agenda.

Therefore, it probably came as something of a surprise the other day when Trevor Hughes, the Denver-based correspondent for USA Today, revealed that he has decided to buy a handgun. Perhaps revealing something about the anti-gun mindset in far too many newspaper editorial offices and news rooms, he noted that, “At least one co-worker came near to tears as she tried to dissuade me.”

But Hughes is joining a growing number of Americans who previously never dreamed of owning a gun, but have been lining up at gun shops. Like those other folks, Hughes has evidently decided his life is worth something. As King County Sheriff John Urquhart has repeatedly observed – along with just about every reliable firearms instructor on the map – having a gun for personal protection, and carrying it, are personal decisions, and Hughes admitted he did some “soul searching” before making that decision.

What did it for Hughes was the same thing that seems to be driving other new gun owners. For him, the San Bernardino terrorist massacre “was the tipping point.”

“As someone who goes to lots of community meetings and rallies,” he wrote, “I’m all too aware of how vulnerable we are. A holiday party? Your co-workers? (For me, it started with movie theaters.) I’m not a fan of waiting for the next attack from a religious terrorist.”

So, what about the plan to spare McAuliffe from being surrounded by people with guns, when he doesn’t really like the idea of people with guns? If he is convinced nobody else needs protection, what makes him so special?

It has been an interesting year. Political elitists like McAuliffe should be constantly reminded of the fatal failures of gun control policies they perpetuate. Restrictive gun control kept the late Carol Bowne of New Jersey disarmed, making it easy for a stalker ex-boyfriend to kill her in June. Washington’s new background check law hasn’t kept guns out of the wrong hands. California’s restrictive gun laws didn’t prevent San Bernardino. Chicago, Baltimore and Washington, D.C. are killing fields. The bodies have piled up around the altar of gun control.

And in 2016, Hillary Rodham Clinton is promising to make gun control a major campaign issue. Nevada voters will decide a background check initiative. Olympia will see anti-gunners pushing more proposals with the threat of running initiatives if they don’t get their way. Bloomberg’s lobbying group will be busy all over the landscape.

The year ahead looks no less interesting than the one that has just about fallen into history. More about that tomorrow.