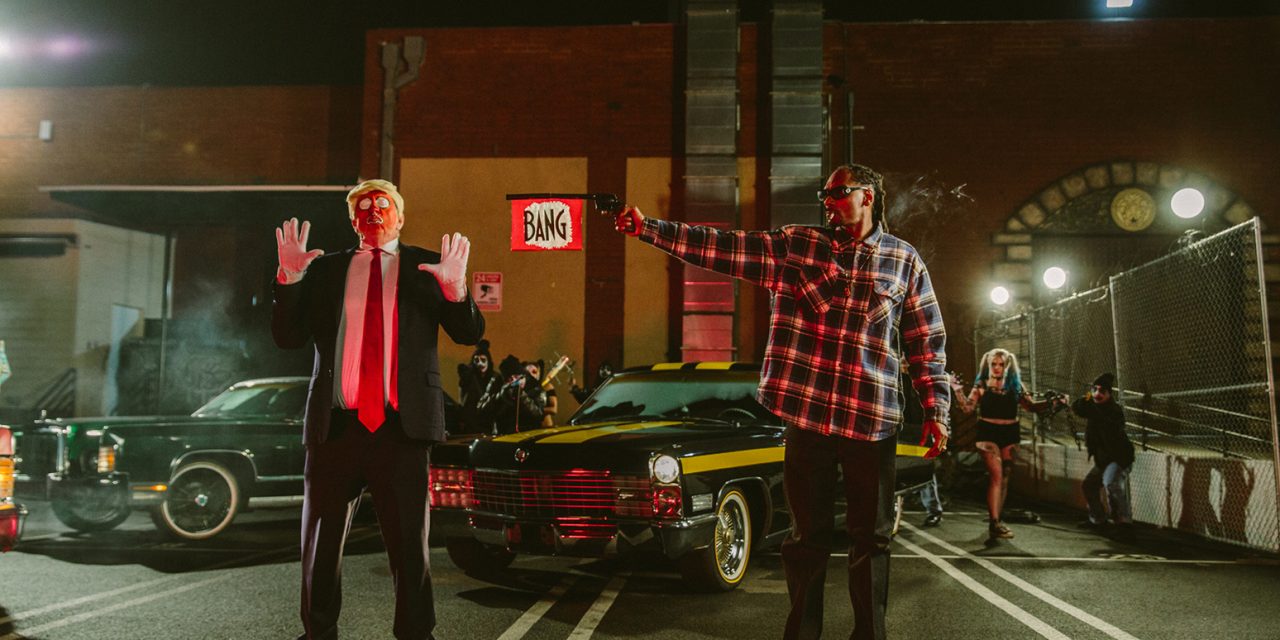 In the video, the Donald Trump parody Klump at one point announces the deportation of all dogs in a press conference. Snoop then gets pissed off and grabs his gun and meets up with Klump in the parking lot.

“Nobody’s dealing with the real issue with this f–king clown as president, and the shit that we dealing with out here, so I wanted to take time out to push pause on a party record and make one of these records for the time being.” In a climactic scene, Snoop pulls a gun on the Trump clown in a parking lot. Later, a chain-bound Trump tries in vain to join Snoop and his accomplice in smoking a blunt. Read Snoop’s elaboration on the song and video concept below, reported Billboard.

“The ban that this motherf–ker tried to put up; him winning the presidency; police being able to kill motherf–kers and get away with it; people being in jail for weed for 20, 30 years and motherf–kers that’s not black on the streets making money off of it — but if you got color or ethnicity connected to your name, you’ve been wrongfully accused or locked up for it, and then you watching people not of color position themselves to get millions and billions off of it. It’s a lot of clown sh-t going on that we could just sit and talk on the phone all day about, but it’s a few issues that we really wanted to lock into [for the video] like police, the president and just life in general.”

Snoop Dogg also targeted police brutality with lyrics like, “Trying to keep from dying in these muthaf–kin’ streets/ F–k the police/ From a black man’s point of view.”

Snoop Dogg isn’t the only mainstream rapper to criticize President Trump, as rap songs as a form of protest music make their first popular appearance since the 90s. Rapper Eminem has also criticized the 45th president calling him a “b*tch” in a song with Big Sean called “No Favors.”